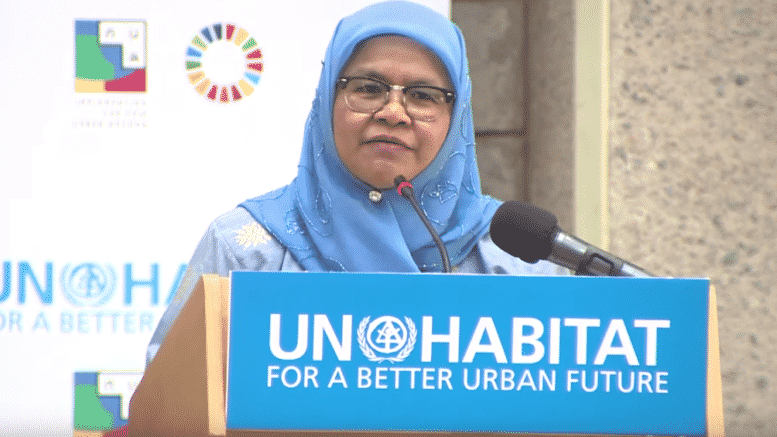 Please Share This Story!
PDF 📄
As a maturing Technocracy, China is praised and held up as a model for its innovation in urban innovation and development. Conveniently overlooked is ubiquitous surveillance, citizen oppression and religious persecution. ⁃ TN Editor

The executive director of the UN-Habitat Maimunah Mohd Sharif on Friday lauded China for using innovation to transform its cities and making them more habitable and friendly to citizens.

Sharif, who was speaking in Nairobi ahead of the first UN Habitat Assembly that kicks off next Monday in Kenya, said that China has transformed most of its polluted areas especially in Beijing and Xuzhou into greener areas.

“The secret to transforming the mining areas into green areas is innovation. In China, the model is that people give proposals on making cities better to the government, which uses technology to implement them,” she said.

Working together with the community, according to her, has seen China build high tech buildings and villages that use solar power, have free internet, health facilities for children, and cater for everybody’s need.

She further applauded Beijing for involving retired people into the country’ productivity, bettering their lives and making them part of the new urban agenda.

Sharif noted that seamless transportation in Chinese cities, for instance, from Beijing to Xuzhou and Shanghai by train has made life better for people.

“Good effective transportation increases productivity for people. I took the train across the three cities and found it systematic and punctual,” said Sharif, who made her first official visit to China last month.

During the trip, she met several Chinese officials, including mayors, she said, adding that she was encouraged by the willingness to enhance partnership with UN-Habitat.

The UN-Habitat chief lauded the Belt and Road Initiative, noting that it encompasses transportation in cities and towns.

“This is part of the reason UN-Habitat signed Action Plan with China. We looked at policy connectivity of the program. It is integrated with planning of cities, connecting all networks to make cities right,” she said.

As part of the UN-Habitat Assembly, a book on the transformation of Shenzhen city in southern China will be launched to enable other countries to get lessons from the story.

“The book tells story of how the city transformed from mining area to cleaner tourist town, where villages are thriving amid urbanization,” she said.

“Other cities need to adopt the style. They will share challenges and opportunities at the assembly,” she said.

Sharif noted the Nairobi assembly will be the first for the UN-Habitat and its theme is “Innovation for Better Quality of Life in Cities and Communities.”