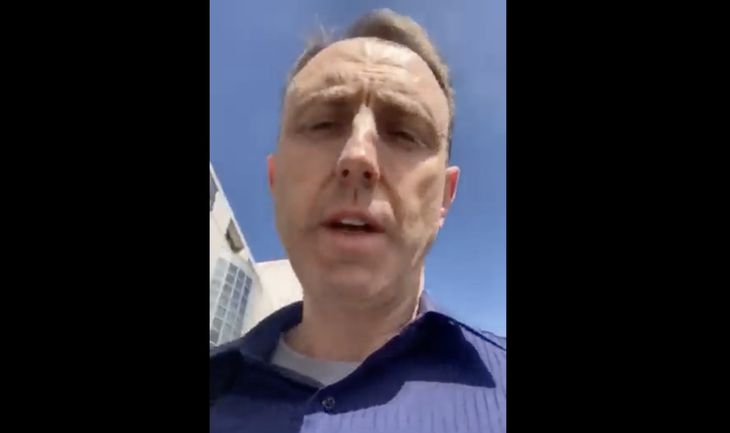 Please Share This Story!
PDF 📄
Pfft. Who needs those board certified doctors, anyway? Walk ’em off the property without notice. Take their id badge away. Tell ’em not to come back. Ruin their careers while you’re at it. Maybe they can get retrained by writing some computer code, or something. ⁃ TN Editor

“This is what happens when you stand up for freedom.”

“This” was being summarily fired, escorted, and deposited from the premises like so much refuse by security guards at University of California Los Angeles (UCLA) Health.

That’s the Westwood hospital where Dr. Christopher B. Rake worked until Tuesday as an anesthesiologist.

It’s unclear what Dr. Rake is now. Is he fired? On unpaid leave? What’s clear is that the anesthesiologist can’t go to work. All because he refused a forced medical procedure — a shot  — that he didn’t want, didn’t think was right, and didn’t believe he needed. The mandate was imposed on him by bureaucrats who know less about medicine than he does.

He was “escorted” from the hospital by three security guards, one of whom warned him, “don’t come near me,” as Rake recorded his own ouster.

Rake may be starting a new, unwanted career as the face of anti-COVID-mandate Americans – perhaps millions of them – who will lose or already have lost their jobs, careers, and livelihoods because of Joe Biden’s and Democrat governors’ orders to get shot up or lose everything.

Dr. Rake said he knew the cost and was willing to pay it – for freedom.

This is what happens when you stand up for freedom and when you show up to work, willing to work, despite being unvaccinated, and this is the price you have to pay sometimes. But what they don’t realize is that I’m willing to lose everything — job, paycheck, freedom, even my life for this cause.

It could be a tragic end to a career at one of the California’s premier medical facilities.

UCLA anesthesiologist Dr. Chris Rake, a COVID-19 vaccine mandate opponent, was escorted out of the UCLA medical plaza yesterday and placed on unpaid administrative leave for refusing to get vaccinated or request an exemption.

UCLA issued a statement following Rake’s ouster saying, “Per the state public health order and University of California policy, active UCLA Health employees not working remotely must be vaccinated or receive an exemption. Those out of compliance are subject to progressive discipline including access denied to worksites and being placed on leave.”

The “progressive discipline” double entendre certainly has an interesting ring to it, no?

UCLA Health staff were scandalized by Rake’s anti-mandate activism. The UCLA student newspaper, The Daily Bruin, wrote that faculty and staff were upset by what they characterized as his “misinformation,” which they claimed “threatened public safety.”

A social media user recorded Dr. Christopher Rake, an anesthesiologist at UCLA Health, at an anti-vaccination rally. In the video, Rake said he was opposed to mandatory vaccination in the workplace and that he founded Citizens United for Freedom – an organization against mandatory vaccines – in response to an Aug. 5 California order that all health care workers must be vaccinated against COVID-19 by Sept. 30.

“I think it’s mind boggling that a physician at a world-class institution would go to such a rally and use their name as a physician to directly contradict public health,” said Dr. Anna Yap, a resident physician in emergency medicine at UCLA.

Dr. Nina Shapiro, a professor of head and neck surgery at the School of Medicine and the director of pediatric otolaryngology at Mattel Children’s Hospital, said vaccine misinformation from doctors could be extremely dangerous.

Rake told the crowd at that August rally something so outrageous that he put a target on his back. So, obviously, the people in charge of the “progressive discipline” needed to silence him.

“He was “escorted” from the hospital by three security guards, one of whom warned him, “don’t come near me,””

Absolutely, the good doctor shouldn’t go near the nut case security man who supports Totalitarians with his actions. He’s been VAXED and is dangerous to the intelligent unvaxed population.

Yes, doc. Do get away from the stupid person. You will be exposed to the gene-therapy-produced- spike-spewing coming from his vaxed body. He’s sick.

STAND TOGETHER. THE GOOD DOCTOR IS NOT AFRAID. NO FEAR!!!!

It is not safe to go to the Doctor anymore!!!

I am a retired nurse who refused most all vaccines for years due to experiencing two adverse reactions years ago and now refusing to comply to forced vaccine mandate for freedoms no longer allowed. I greatly admire all the physicians, nurses and healthcare workers who are standing up agains the vaccine mandates. To many people are failing to be brave, face the fear forced by the stupidity of the extreme liberal most of which have no medical or virology knowledge. It is an embarrassment to see the failure of the medical professionals who know the risks and do not practice… Read more »

[…] >COVID Purge: UCLA Med Center Doctor Escorted Out By Security For Refusing Shot – “This is what happens when you stand up for freedom and when you show up to work, willing to work, despite being unvaccinated, and this is the price you have to pay sometimes. But what they don’t realize is that I’m willing to lose everything — job, paycheck, freedom, even my life for this cause.” This anesthesiologist is a freedom loving HERO for doing what he believes in – no forced vaccinations!  The vaccinated are NOT brave, rather they are uneducated bullies. […]

We need an army of clear minded individuals with backbone like Dr. Rake. Mass refusal to obey unconstitutional commands is our only hope. A new legal principle needs explicit recognition: Abrogation of Constitutional rule, and in particular the Constitutional rights of individuals, by responsible officers of public or private organizations who wield public decision making power, is treason. Aiding and abetting the establishment of totalitarian governance is heinous treason. Note the emphasis. Corporate executives, bank and investment fund managers, and responsible individuals in media, the AMA, ABA, universities, NGOs, etc. all make decisions which have binding force over employees, customers… Read more »