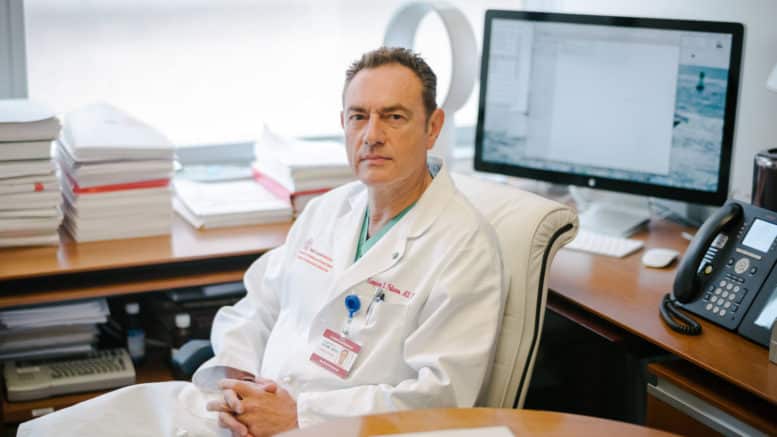 Gianpiero Palermo, a professor of embryology at Weill Cornell Medicine, runs the lab where scientists are trying to use CRISPR to edit genes in human sperm. (Image: Elias Williams for NPR)

Please Share This Story!
PDF 📄
Technocrat purist Gianpiero Palermo states, “If we can wipe out a particular gene, it would be incredible… theoretically, in principal, this would be a major, major benefit to society.” Um, like wiping out humanity? ⁃ TN Editor

First it was human embryos. Now scientists are trying to develop another way to modify human DNA that can be passed on to future generations, NPR has learned.

Reproductive biologists at Weill Cornell Medicine in New York City are attempting to use the powerful gene-editing technique called CRISPR to alter genes in human sperm. NPR got exclusive access to watch the controversial experiments underway.

The research is aimed at finding new ways to prevent disorders caused by genetic mutations that are passed down from men — including some forms of male infertility. The team is starting with a gene that can increase the risk for breast, ovarian, prostate and other cancers.

The experiments are just starting and have not yet been successful. But the research raises many of the same hopes — and fears — as editing the DNA of human embryos. Nevertheless, the researchers defend the work.

“I think it’s important from the scientific point of view to investigate in an ethical manner to be able to learn if it’s possible,” says Gianpiero Palermo, a professor of embryology in obstetrics and gynecology at Weill Cornell Medicine, who runs the lab where the work is being conducted.

During a recent visit to Palermo’s Andrology Laboratory at Weill Cornell’s Center for Reproductive Medicine, NPR witnessed an experiment attempting to edit a single gene in sperm.

“If we can wipe out a particular gene, it would be incredible,” Palermo says. “Theoretically, in principal, this would be a major, major benefit to society.”

Other scientists who are not involved in the research agree. One of the main goals is to try to understand and possibly prevent male infertility caused by genetic mutations.

“Male infertility is a very common condition,” says Kyle Orwig, a professor in the department of obstetrics, gynecology and reproductive sciences at the University of Pittsburgh School of Medicine. “And there are some diseases that are incredibly devastating to families. And for those diseases, for me, if you could get rid of it, why wouldn’t you get rid of it?”

But others say editing DNA in sperm raises the same troubling questions as editing DNA in embryos. Would it ever be safe to make babies that way? Would it open the door to someone someday trying to make “designer babies”? Should scientists be trying to tinker with the human gene pool in ways that could affect generations to come?

“Who you lookin’ at with a face like that?”
Hateful scientist, thinks he’s God.