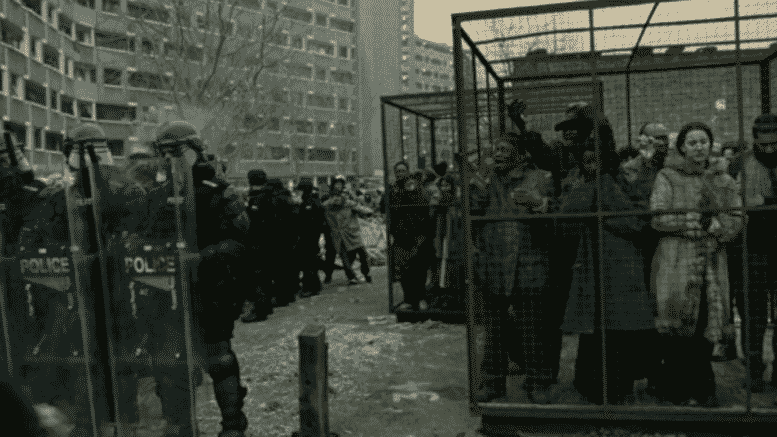 Posted By: Mike Whitney via The Unz Review October 2, 2020

Please Share This Story!
PDF 📄
Population control has been a not-so-hidden agenda ever since the Club of Rome’s publication of Limits to Growth in 1972 and Dr. Paul Ehrlich’s Population Bomb in 1968. Disguised in many ways to hide its true purpose, it is remains patently anti-human. ⁃ TN Editor

“The further a society drifts from the truth, the more it will hate those who speak it.” George Orwell

Can we agree that there are two types of Covid-19?

The first type, is Covid-19 ,”The Virus”, which is a fairly mild infection that most people don’t even realize they’ve contracted. They remain either asymptomatic or have slight flu-like symptoms that go away after a week or so. A tiny sliver of the population– that are mainly-older, vulnerable people with underlying health conditions– can develop complications, become seriously ill and die. But, according to most analysis, the chances of dying from Covid are roughly between 1 in every 200 to 1 in every 1,000 people. (CDC-IFR- 0.26%) In other words, Covid is not the Spanish Flu, not the Black Plague and the Genocidal Planetary Killer Virus it was cracked up to be. It kills more people than the annual influenza, but not significantly more.

The second type of Covid-19, is Covid “The Political Contrivance” or, rather,CODENAME: Operation Virus Identification 20 19. This iteration of the Covid phenom relates to the manner in which a modestly-lethal respiratory pathogen has been inflated into a perennial public health crisis in order to implement economic and societal changes that would otherwise be impossible. This is the political side of Covid, which is much more difficult to define since it relates to the ambiguous agenda of powerful elites who are using the infection to conceal their real intentions. Many critics believe that Covid is a vehicle the Davos Crowd is using to launch their authoritarian New World Order. Others think it has more to do with Climate Change, that is, rather than build consensus among the world leaders for mandatory carbon reductions, global mandarins have simply imposed lockdowns that sharply reduce economic activity across-the-board. This, in fact, has lowered emissions significantly, but at great cost to most of humanity. Covid restrictions have triggered a sharp uptick in suicides, clinical depression, child abuse, domestic violence, alcoholism and drug abuse. The list goes on and on. Also, it has left economies everywhere in a shambles, increasing unemployment and homelessness exponentially, while setting the stage for massive famines in undeveloped countries around the world. Even so, key players in the Covid crisis– like mastermind Bill Gates– continue to marvel at impact these onerous restrictions have had on emissions. Take a look at this excerpt from a recent post at the Microsoft founder’s blog:

“You may have seen projections that, because economic activity has slowed down so much, the world will emit fewer greenhouse gases this year than last year. Although these projections are certainly true, their importance for the fight against climate change has been overstated.

Analysts disagree about how much emissions will go down this year, but the International Energy Agency puts the reduction around 8 percent. In real terms, that means we will release the equivalent of around 47 billion tons of carbon, instead of 51 billion.

That’s a meaningful reduction, and we would be in great shape if we could continue that rate of decrease every year. Unfortunately, we can’t.

Consider what it’s taking to achieve this 8 percent reduction. More than 600,000 people have died, and tens of millions are out of work. This April, car traffic was half what it was in April 2019. For months, air traffic virtually came to a halt.

To put it mildly, this is not a situation that anyone would want to continue. And yet we are still on track to emit 92 percent as much carbon as we did last year. What’s remarkable is not how much emissions will go down because of the pandemic, but how little.

In addition, these reductions are being achieved at, literally, the greatest possible cost.

To see why, let’s look at what it costs to avert a single ton of greenhouse gases. This figure—the cost per ton of carbon averted—is a tool that economists use to compare the expense of different carbon-reduction strategies. For example, if you have a technology that costs $1 million, and using it lets you avert the release of 10,000 tons of gas, you’re paying $100 per ton of carbon averted. In reality, $100 per ton would still be pretty expensive. But many economists think this price reflects the true cost of greenhouse gases to society, and it also happens to be a memorable round number that makes a good benchmark for discussions.

Now let’s treat the shutdown caused by COVID-19 as if it were a carbon-reduction strategy. Has closing off major parts of the economy avoided emissions at anything close to $100 per ton?

No. In the United States, according to data from the Rhodium Group, it comes to between $3,200 and $5,400 per ton. In the European Union, it’s roughly the same amount. In other words, the shutdown is reducing emissions at a cost between 32 and 54 times the $100 per ton that economists consider a reasonable price.

If you want to understand the kind of damage that climate change will inflict, look at COVID-19 and spread the pain out over a much longer period of time. The loss of life and economic misery caused by this pandemic are on par with what will happen regularly if we do not eliminate the world’s carbon emissions.” (“COVID-19 is awful. Climate change could be worse“, Gates Notes)

Isn’t it curious that Gates has spent so much time calculating the impact lockdowns have had on carbon emissions? And look at how precise his calculations are. These are not “back of the envelop” type computations, but a serious bit of number-crunching. He even takes the number of people who have died of Covid worldwide (600,000) and painstakingly compares it to the projected “global mortality rates” (“on an annualized basis”) of people who will die from “increases in global temperatures”.

Does it seem to you that Gates might have more than a passing interest in these estimations?? Does it look like he might be more than just a neutral observer impartially perusing the data?

Let me pose a theory here: In my opinion, Gates’ interest in these matters is not merely speculative curiosity. He and his fellow elites are conducting an elaborate science experiment in which we– mere mortals– are the lab rats. They are deliberately using the Covid-scare to conceal their real objective which is to prove beyond a doubt that curtailing emissions by shutting down vast swathes of the global economy will NOT stave off catastrophic climate change.

So, let’s just assume for the sake of argument that I’m right. Let’s assume that other elites read Gates report and agree with its conclusions. Then what?

This is where it gets interesting, because Gates doesn’t really answer that question, but his silence gives him away.

Let me explain: Gates says, “The relatively small decline in emissions this year makes one thing clear: We cannot get to zero emissions simply—or even mostly—by flying and driving less.”

Okay, so we cannot stop climate change by doing what we are doing now.

Then Gates says: “Let science and innovation lead the way….Any comprehensive response to climate change will have to tap into many different disciplines…. we’ll need biology, chemistry, physics, political science, economics, engineering, and other sciences.”

Gates then says: “It will take decades to develop and deploy all the clean-energy inventions we need.”

Okay, so we have to move fast to avoid tragedy.

Finally, Gates says: “Health advocates said for years that a pandemic was virtually inevitable. The world did not do enough to prepare, and now we are trying to make up for lost time. This is a cautionary tale for climate change, and it points us toward a better approach.”

Got that? So, on the one hand, Gates is saying ‘We must act fast and follow the science’, and on the other he is saying, ‘Shutting down the economy alone isn’t going to work.’

WTF? If it’s not going to work, then why bother? Why is Gates sending a mixed message?

Ahh, but there’s the rub. It’s not a mixed message and it is not a contradiction. What Gates is doing is leading the reader to draw the same conclusion that he has, (wink, wink) that is, if reducing economic activity isn’t going to work, then we have to find an entirely different solution, like reducing the size of the population. Isn’t that the only logical conclusion?

Yes, it is. So, the Great Lab Experiment of 2020 (Covid) has alot to do with population control; thinning the herd so our exalted Davos Overlords can ensure their blue-blooded offspring will have mild temps when they winter-over on their private islands in the Caribbean. But population control is just a small part of a much more ambitious plan to restructure the global economy, vaccinate everyone on the planet and dispose of those niggling civil liberties to which Americans have become so attached.

Of course it is about population control. Gates comes from a long line of eugenicists. Even Prince Phillip said he would like to come back as a virus so he could lower the world population. It is called slow kill. The goal is written on the Georgia Stones: reduce the population to 500 million [from 7.5 Billion]. It is the easiest way they can get it done while pretending to help and profitting from our misery by polluting our medicines, food ,water and air .

How a software developer got to be kingpin of the health industry, is I believe, something that most people are still shaking their heads about. I can see the soul of that man as black as night. I’m sure everyone has seen the picture by now, of him, at jeffrey einstein’s house? Talking about his favorite subject, I imagine…eugenics. I wonder what demon he had to kiss to become as “famous for nothing”, as he’s become. You don’t become part of the elite, without signing your soul away.

Problem. No one has contracted anything. No such thing as a contagious virus.

The resolutions, symptoms, mandates, protocols, results and ultimately the trajectory and outcomes of the media and conspiring individuals pushing this infused and insentivised, fraudulently generated – ‘pandemic’, are in a LONG list of miraculous coincidences and happenings that ALL, ALL, ALL, – fall directly in line precisely with the premeditated, but not entirely but sufficiently released, GOALS of the following ideologies- The Paris agreement / Green Agenda Agenda 21 / Sustainability 2030 The great RESET and Klaus Schwabs’ reimagined Social Contract and ‘Stakeholder’ slight of hand ( ‘you will own nothing and be happy’ – SEE- fraudulent use of PCR diagnostic to implement lockdowns… Read more »

A lie does not become a truth because it is repeated everywhere. CO2 is part of the periodic system and mother nature cycle.
The CO2 fake was invented by Goldman Sachs CEO Al Gore as a financial profit tool to control global energy prices and consumption.