From a truly objective scientific view, a second wave was not predicted nor has it materialized. However, the Technocrat narrative has completely overridden science to perpetuate the “Great Panic of 2020” to drive vaccines to the world’s population.

In this case, Dr. Mike Yeadon might be considered a whistleblower of sorts as he defies Big Pharma’s hollow rhetoric and says the “pandemic is over”. Establishment media will not give a single inch of coverage to his analysis. ⁃ TN Editor

In a stunning development, a former Chief Science Officer for the pharmaceutical giant Pfizer says “there is no science to suggest a second wave should happen.” The “Big Pharma” insider asserts that false positive results from inherently unreliable COVID tests are being used to manufacture a “second wave” based on “new cases.”

Dr. Mike Yeadon, a former Vice President and Chief Science Officer for Pfizer for 16 years, says that half or even “almost all” of tests for COVID are false positives. Dr. Yeadon also argues that the threshold for herd immunity may be much lower than previously thought, and may have been reached in many countries already.

In an interview last week Dr. Yeadon was asked:

“we are basing a government policy, an economic policy, a civil liberties policy, in terms of limiting people to six people in a meeting…all based on, what may well be, completely fake data on this coronavirus?”

Dr. Yeadon said in the interview that, given the “shape” of all important indicators in a worldwide pandemic, such as hospitalizations, ICU utilization, and deaths, “the pandemic is fundamentally over.”

Yeadon said in the interview:

“Were it not for the test data that you get from the TV all the time, you would rightly conclude that the pandemic was over, as nothing much has happened. Of course people go to the hospital, moving into the autumn flu season…but there is no science to suggest a second wave should happen.”

In a paper published this month, which was co-authored by Yeadon and two of his colleagues, “How Likely is a Second Wave?”, the scientists write:

“It has widely been observed that in all heavily infected countries in Europe and several of the US states likewise, that the shape of the daily deaths vs. time curves is similar to ours in the UK. Many of these curves are not just similar, but almost super imposable.”

In the data for UK, Sweden, the US, and the world, it can be seen that in all cases, deaths were on the rise in March through mid or late April, then began tapering off in a smooth slope which flattened around the end of June and continues to today. The case rates however, based on testing, rise and swing upwards and downwards wildly.

Media messaging in the US is already ramping up expectations of a “second wave.” 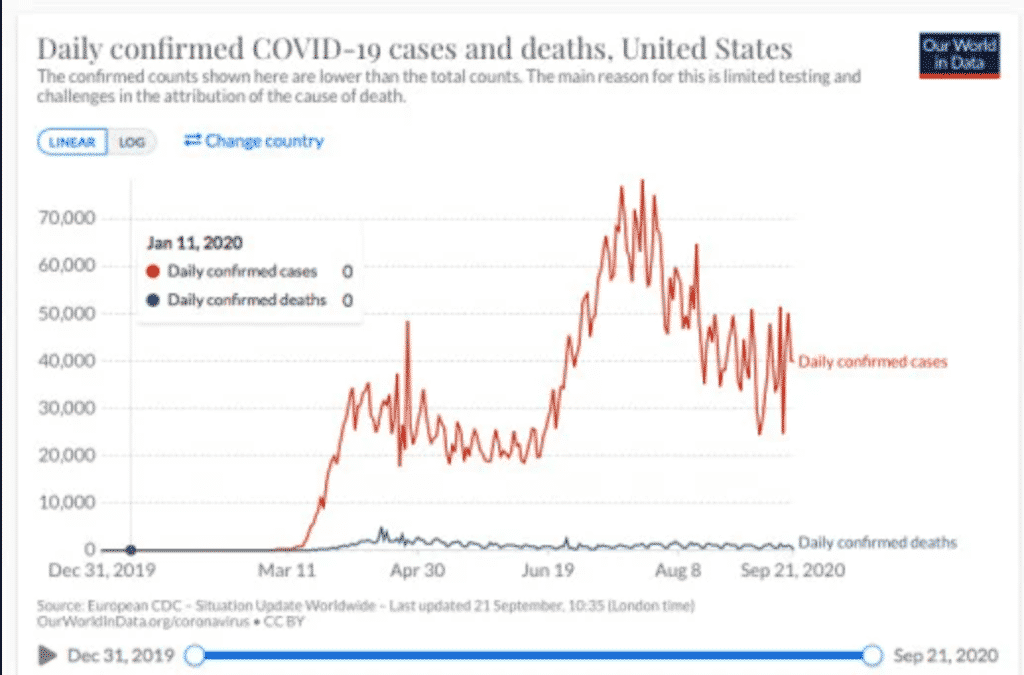 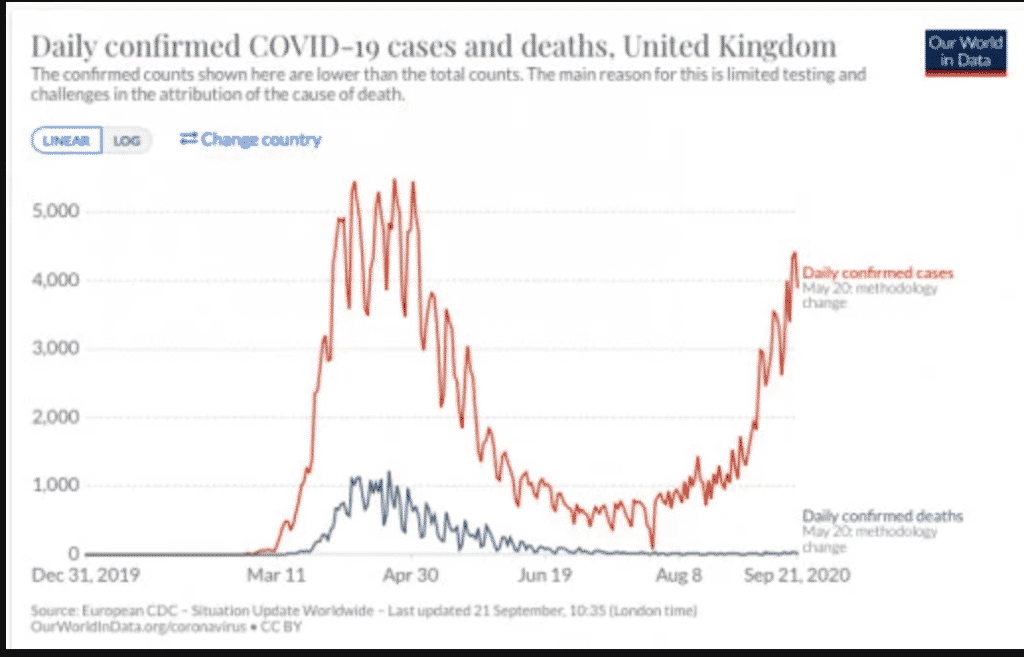 Survival Rate of COVID Now Estimated to be 99.8%, Similar to Flu, Prior T-Cell Immunity

The survival rate of COVID-19 has been upgraded since May to 99.8% of infections. This comes close to ordinary flu, the survival rate of which is 99.9%. Although COVID can have serious after-effects, so can flu or any respiratory illness. The present survival rate is far higher than initial grim guesses in March and April, cited by Dr. Anthony Fauci, of 94%, or 20 to 30 times deadlier. The Infection Fatality Rate (IFR) value accepted by Yeadon et al in the paper is .26%. The survival rate of a disease is 100% minus the IFR.

Dr. Yeadon pointed out that the “novel” COVID-19 contagion is novel only in the sense that it is a new type of coronavirus. But, he said, there are presently four strains which circulate freely throughout the population, most often linked to the common cold.

“There are at least four well characterised family members (229E, NL63, OC43 and HKU1) which are endemic and cause some of the common colds we experience, especially in winter. They all have striking sequence similarity to the new coronavirus.”

The scientists argue that much of the population already has, if not antibodies to COVID, some level of “T-cell” immunity from exposure to other related coronaviruses, which have been circulating long before COVID-19.

“A major component our immune systems is the group of white blood cells called T-cells whose job it is to memorise a short piece of whatever virus we were infected with so the right cell types can multiply rapidly and protect us if we get a related infection. Responses to COVID-19 have been shown in dozens of blood samples taken from donors before the new virus arrived.”

Introducing the idea that some prior immunity to COVID-19 already existed, the authors of “How Likely is a Second Wave?” write:

“It is now established that at least 30% of our population already had immunological recognition of this new virus, before it even arrived…COVID-19 is new, but coronaviruses are not.”

They go on to say that, because of this prior resistance, only 15-25% of a population being infected may be sufficient to reach herd immunity:

“…epidemiological studies show that, with the extent of prior immunity that we can now reasonably assume to be the case, only 15-25% of the population being infected is sufficient to bring the spread of the virus to a halt…”

In the US, accepting a death toll of 200,000, and an infection fatality rate of 99.8%, this would mean for every person who has died, there would be about 400 people who had been infected, and lived. This would translate to around 80 million Americans, or 27% of the population. This touches Yeadon’s and his colleagues’ threshold for herd immunity.

I cannot believe people STILL believe there is ANY danger from this alleged Virus, which has not been identified or isolated, and accept that a Test which CANNOT test for a virus they dont even know of, and seeing it is only the debri from dying cells in the human normal ‘clear out’ of our immune system, which is bound to show what ever they wish it to show to make the numbers look good. Why do you thinl they used the OLD Peoples ‘Waiting for God’ Homes, where the occupants were treated so badly and died off quicker than… Read more »

B Boru
Reply to  Rodney

As often they do, man makes the claim of others shortcomings and their own understanding as superior. Such is the way of men to see error in others that they themselves do not think they possess. This writer finds it beyond belief. Sad state of affairs when poorly skilled writers get to offer their poor understanding in a way that my eyes can seek out with ease.

Great article! But isn’t this man worried at all, about putting news like this, out? This news needs to be spread around to everyone!! But I’d be worried if the elite would shut this man down. Anyone and everyone else who has talked about this “fake” virus, has had things happen to them, or done to them. This man has to be brave….but it’s great that he’s getting it out there! More people need to read this! And technocracy news gets a grade A, too…of course. But there’s also news out there, that I’ve archived, that this 5G is going… Read more »

There was no first wave. Germ Theory is false. A ‘virus’ is a reaction to disease, not a cause.

How can anyone say there is such a thing as covid-19 when the virus has never been properly isolated? All they have ever done is sequence a bunch of ubiquitous genetic material and called it a “virus” That’s like going into a mixed forest, counting the oak trees and proclaiming the forest has an oak virus. The science of virology is largely a lie. They are claiming that a bundle of RNA and /or DNA that is encapsulated by protein/structured water is something that can cause disease when it is more likely akin to a garbage bag to be taken… Read more »

Most people don’t do any. Critical thinking because they are brain desensitized…. The plan has been in action for many years…the power to control the masses….by repeating……. This comes straight out of Germany… Russia.. And etc.master plan is Satan total destruction of Man…..the game is almost over for this upside down world…… You see the plan is total destruction…. Only one way out….most people don’t have a clue…. But deadth is knocking on the door ….so it’s Heaven or hell.. For eternity….. Many believe in everything but The Creator of Heaven and Earth….. Man is but chaff blowing in the… Read more »

Science Lies Told by Liberals
We have man made global warming.
We have man made climate change.
Homosexuality is Genetic and cannot be changed.
Gender is a false construct and can be changed whenever.
Covid is going to kill 10’s of millions of people around the world.
Covid won’t kill you if you are protesting against White people, the police or the USA.

Your alternative update on #COVID19 for 2020-10-05. Uncleared and unapproved new antigen ‘test’ will be worse than 35+ cycle PCR | paulthepaperbear