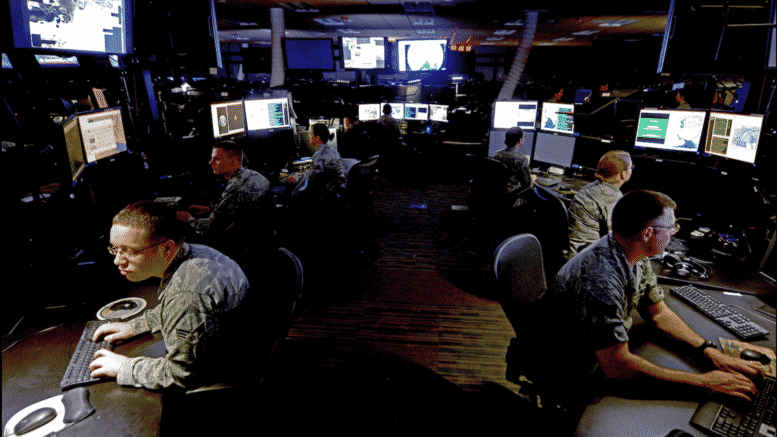 Please Share This Story!
PDF 📄
When Google abandoned Project Maven in 2018 over ethical concerns, it was snapped up by Palantir. Its CEO is a self-avowed progressive socialist, but said he would not sell the AI surveillance software to adversaries of the U.S.

Project Maven is an AI system used by the military to dominate its enemies. Google was caught working with China as well as the U.S. and to ‘save face’, it sold the project to Planatir. Technocrats of a feather, flock together. ⁃ TN Editor

Denver-based Palantir Technologies, Inc. forecasts a major increase in the company’s share of DoD, intelligence community, and other federal software business, as the company seeks to become the “central operating system for all U.S. defense programs,” per last month’s prospectus for the company’s initial public offering (IPO).

While the company has been a significant player in the provision of artificial intelligence (AI) capabilities for the Pentagon, Palantir has also had trouble turning a profit. For example, while Palantir had revenues of nearly $743 million last year–25 percent higher than 2018, it reported net losses of nearly $580 million. That is starting to change, per Palantir, as it has recently seen a “significant decrease in the time and number of software engineers required to install and deploy” the company’s software.

Co-founded by PayPal entrepreneur Peter Thiel and several colleagues in 2003 “to provide software for use in counterterrorism operations,” per the Palantir prospectus, the company has expanded its footprint to include contracting with the U.S. Army, Navy, Air Force, Special Operations Command, intelligence community, and federal agencies, such as the Department of Homeland Security, Centers for Disease Control, Department of Agriculture, Food and Drug Administration and Securities and Exchange Commission (SEC).

The big data analytics provided by Palantir may be of particular use in Project Maven, which has looked to develop an artificial intelligence tool to analyze full-motion video (FMV) surveillance footage collected by unmanned aircraft and decrease the workload of intelligence analysts.

Google was the prime contractor for Project Maven but dropped out in 2018 after receiving pushback from employees about the company’s tools being used for an AI drone imaging effort. Palantir has assumed Google’s role, Business Insider has reported.

On May 20, 2017, nearly a month after the start of Project Maven, former Deputy Defense Secretary Robert Work assigned to the Algorithmic Warfare Cross-Functional Team (AWCFT) under the Undersecretary of Defense for Intelligence the task of the automation of Processing, Exploitation, and Dissemination (PED) of tactical and mid-altitude full-motion video from drones in support of operations to defeat ISIS insurgents.

A recent paper for the Modern War Institute at West Point by Tufts University Prof. Richard Shultz and United States Special Operations Commander Army Gen. Richard Clarke said that Project Maven could serve as a springboard to transform DoD “from a hardware-centric organization to one in which AI and ML [machine learning] software provides timely, relevant mission-oriented data to enable intelligence-driven decisions at speed and scale. When that happens, U.S. commanders will be able to gain decisive advantage over current and future enemies.”

Agile Condor is to undergo classified testing over the next year after a recent flight on the General Atomics Aeronautical Systems, Inc.(GA-ASI) MQ-9 Reaper at GA-ASI’s Flight Test and Training Center in Grand Forks, North Dakota.

Palantir’s AI investments are apparently full steam ahead. Billionaire Thiel and current Palantir CEO Alex Karp, Thiel’s classmate at Stanford Law School, are at opposite ends of the political spectrum, as Thiel has supported President Trump, and Karp is an avowed progressive “socialist” who has adamantly opposed Trump. They nevertheless have come to a meeting of the minds in supporting U.S. military forces and intelligence agencies.

This was developed by ISrahell, wasn’t it?