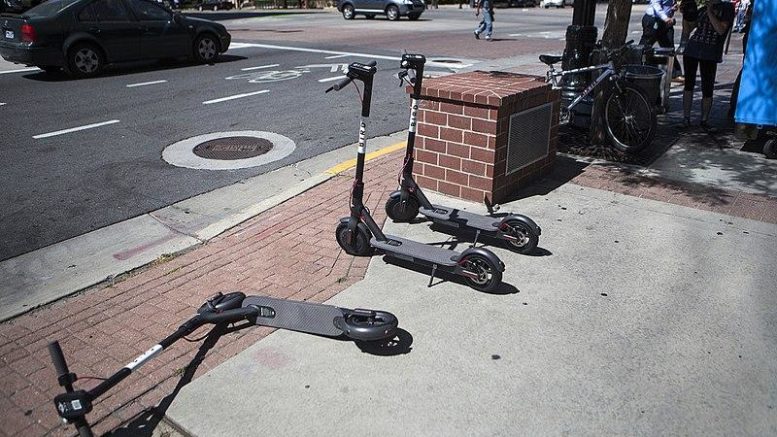 Please Share This Story!
PDF 📄
Scooters, e-bicycles and ride sharing companies are invading public space in cities with ugly consequences, and a war is brewing between cities, their citizens and the Big Tech companies who have barged in to disrupt. ⁃ TN Editor

Summer is here and the electronic hum of scooters is filling city sidewalks all over the world. From L.A. to D.C., many American downtowns have hit their one-year anniversary with scooters, and European capitals have begun to allow them.

The benefit is obvious: Scooters provide on-demand, affordable mobility to any able-bodied smartphone user. As the vehicle’s fan base grows, however, so do the frustrations that provoke other urbanites to detest them — abandoned scooters left on walkways and even scooter-pedestrian collisions. Paris Mayor Anne Hidalgo says escalating tensions are leading to “anarchy” on her city’s boulevards and footpaths. And an even bigger issue looms over arguments for and against this revamped child’s toy. Scooters may well be the Trojan Horse with which big tech colonizes the world’s public space.

Scooters (and dockless e-bikes) inhabit cities like few other consumer products ever have. Through location-tracking and app-based transactions, scooter barons oversee their business from a distance while storing their entire inventories on our streets and sidewalks for next to nothing. When in use, scooters generate revenue for Bird, Lime or some other “micro-mobility” company. When not in use, they just sit there, wherever there happens to be: a bike lane, a doorway, a neighbor’s front yard. Citizens have no lawful recourse, leading some to resort to micro-vandalism.

Scooters’ success in spite of the persistent backlash is a warning about whether tech can succeed in leveraging public space. A playbook seems to be taking shape. First, identify a point of friction in urban life (such as “the last-mile problem” in public transportation). Next, develop a profitable solution and deploy it in cities and ask for permission later. When people howl, let your early adopters fight the battle for you — use them as a shield whenever critics speak ill of your business model. Finally, push aggressive expansion while voicing support for sensible regulations that are essentially unenforceable.

Like Uber and Airbnb before them, scooter companies aim to satisfy their customers with little regard for how their businesses affect our cities’ ecosystems. All three services tamper with neighborhood norms in ways that are annoying at first and deeply disturbing upon further inspection. Via Airbnb, for instance, a quaint bungalow surrounded by family homes suddenly becomes a bachelor party pad replete with fresh groups of drunken idiots each weekend. Annoying. But what’s far more worrisome is recent data indicating that Airbnb is worsening the housing crisis in cities like Los Angeles and New Orleans. Landlords love Airbnb: Why lease a place to lower-income tenants for $900 a month when you can earn double by renting it out here and there to well-off tourists? When residential units are converted into the equivalent of chic motels, the pool of long-term housing decreases and rental prices rise.

As for Uber and other ride-sharing apps, originally framed as a solution to urban congestion, they are instead putting more cars on the road, making traffic worse. A San Francisco study found that bumper-to-bumper delays soared 62% from 2010 to 2016, and roughly half of this increase was caused by ride-sharing vehicles. Very few riders are choosing to share trips with other passengers and rates of car ownership in the city remain steady. The big loser has been public transit, particularly buses, whose ridership has decreased nearly 13% — a drop that presents grave challenges to a service that is both more affordable and energy efficient than Uber’s fleet of vehicles.