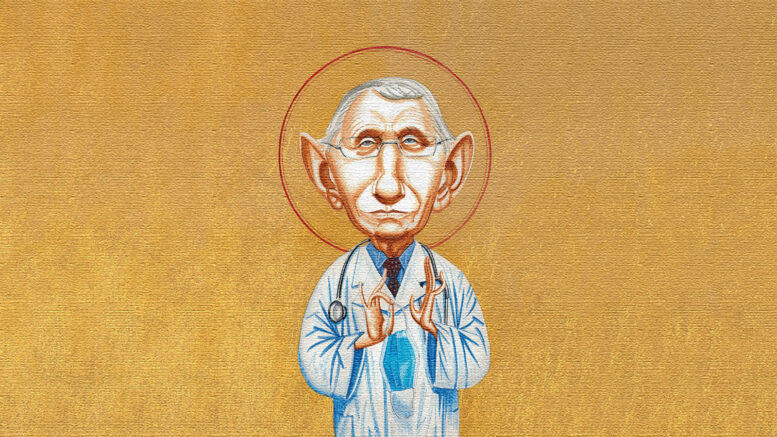 Dr. Anthony Fauci is now in full defensive mode as critics are responding to the trove of emails recently secured by a Freedom of Information Act (FOIA) request. It is a desperate attempt to salvage his public reputation and trust.

Chances are he will never see either again in his lifetime.

“It’s very dangerous, Chuck, because a lot of what you’re seeing as attacks on me, quite frankly, are attacks on science. Because all of the things that I have spoken about consistently from the very beginning have been fundamentally based on science. Sometimes those things were inconvenient truths for people, and there was pushback against me.

So if you are trying to get at me as a public health official and scientist, you’re really attacking not only Dr. Anthony Fauci, you are attacking science. And anybody that looks at what is going on clearly sees that. You have to be asleep not to see that.”

As a dyed-in-the-wool Technocrat, Fauci has a warped perception of reality. Much of what he considers science is, in fact, pseudo-science. In other words, fake. Yes, of course we readily attack fake science, as we should. But we also attack liars and manipulators who abuse their position of influence and trust to abuse their subjects.

When a teacher, for instance, commits sexual abuse against a minor student, we first regurgitate over the act of abuse itself. Secondly, we recoil over the abuse of the trusted position that the teacher had over his/her students. In combination, it is the most egregious act of criminal behavior possible. Such are sexual predators and hunters of young prey. They not only have no moral compass but they are masters at maintaining a facade of propriety and innocence.

Fauci is not a sexual predator, but he exhibits the same characteristics. He abused his power when he blatantly lied to Congress, the President and the American people. Hundreds of medical professionals and scientists questioned Fauci’s “science” from the very beginning, but they were shamed and ridiculed as being incapable of understanding the “true science”. Fauci lied about alternative treatments for COVID such as hydroxychloroquine (HCQ), flatly claiming that it was unsafe. It is now understood that its early use could have saved hundreds of thousands of deaths.

Fauci’s self-defense is ridiculous. He says he as spoken “consistently’ from the beginning, but in fact he has flip-flopped as much as any politician could hope for. He hints that his “science” is somehow immutable (never changing) like God. Nobody can question Fauci’s god, and why would you if this god is always correct? Fauci clearly believes that he is the priest (chief spokesman), if not the high priest of his god, and that he has accurately revealed to the masses what this god has spoken to him.

This is a revealing look at the outcome of Scientism, the philosophy behind both Technocracy and Transhumanism. I have written extensively about both. The father of Scientism, French philosopher Saint-Simon, stated in the early 1800s that,

Saint-Simon then called for a priesthood of scientists and engineers to serve as spokesmen and enforcers for science.

In 2017 I wrote in The Mind Of A Technocrat Is Rooted In The Religion Of Scientism,

It is a fatal error to equate Scientism with science. True science explores the natural world using the time-tested scientific method of repeated experimentation and validation. By comparison, Scientism is a speculative, metaphysical worldview about the nature and reality of the universe and man’s relation to it.

If there were not enough examples to prove this point back then, Fauci has given us a unique opportunity to understand it now.

Why Does China Collect Americans’ DNA?

Fraud fauci is satans minion. He is a Jesuit and a red shoe wearing member of the Illuminati. He knows nothing regarding true science and needs to hang for crimes against humanity along with gates and the msm.

“and man will make himself to be god”.

Can he please answer the simple question. What in the hell are you doing making deadly viruses that can’t be made naturally and financing germ warfare?

They don’t think like you or I do. Trying to make sense of their actions by applying your moral framework will always lead to a dead end. Engineering virus is totally acceptable to them. Morally, proponents of scientists might as well be an entirely different or parallel society.

Something about a greener earth. I have read some papers by Fauci gloating over how he and others can use the pandemic to restrict gatherings, ban animal husbandry/pets, limit human interactions, and keep them semi isolated forever. Also limit household sizes. The masks and antisocial distancing should help restrict procreation.

[…] Quelle: Shades Of Scientism: Fauci Likens Science To God, Himself As Priest […]

[…] Shades Of Scientism: Fauci Likens Science To God, Himself As Priest Dr. Anthony Fauci is now in full defensive mode as critics are responding to the trove of emails recently secured by a Freedom of Information Act (FOIA) request. It is a desperate attempt to salvage his public reputation and trust. […]

Take a closer look at this guy s face….pure evil, devil in disguise

I like to remind people that science isn’t moral or immoral, it’s amoral. Scientists only moralize for the benefit of the masses. In my opinion, that’s what makes technocracy and the scientism it’s rooted in so frightening and dangerous. You are simply a biological machine and losing a few units for the greater good, whatever they mean by that term, is totally acceptable under their belief system. This is how they justify idiotic research into virus modification. The ends always justify the means.