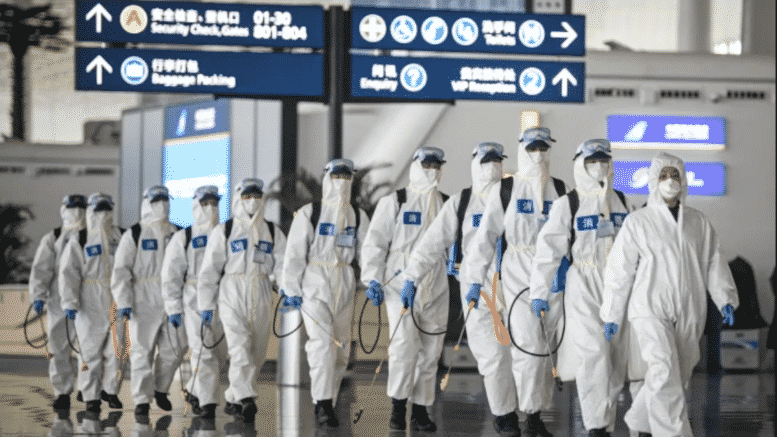 Please Share This Story!
PDF 📄
Don’t get too comfortable with any U.S. relaxation of COVID restrictions because China is not done with global panic, draconian lockdowns, prison terms for violators and crushing all dissent. China is the global model for Technocracy and Scientific Dictatorship. ⁃ TN Editor

China has followed variations of that formula for dealing with the coronavirus for more than a year — and a new outbreak suggests that they could be part of Chinese life for some time to come.

China appeared to get the coronavirus under control nearly a year ago. But hundreds of millions of Chinese people remain unvaccinated. New variants of the coronavirus have appeared, and questions remain about whether China’s self-made vaccines can stop them.

The latest cases have been found in Guangzhou, capital of the southern province of Guangdong. The authorities have blamed the Delta variant, which has caused widespread loss of life in India.

The city tested practically its entire population of 18.7 million between Sunday and Tuesday, some of them for the second time. It has also put neighborhoods with a total of more than 180,000 residents into total lockdowns, with practically no one allowed out except for medical testing.

The early infections appear to have jumped from person to person at a cluster of eateries. Each infected person has infected more other people than in any previous outbreak that China has confronted, Zhang Zhoubin, deputy director of the Guangzhou Center for Disease Control, said at a news conference.

“The epidemic faced by Guangzhou this time is an unprecedented opponent, and it requires more resolute and decisive measures to deal with it,” he said.

Test facilities in Guangzhou have been operating around the clock. Lines are long. Residents wake early to try to beat the rush, but still find delays.

Mandy Li, a longtime resident of the city’s Liwan District, where most of the infections have occurred, said she set her alarm clock for 3:30 a.m. She still had to wait an hour.

“In the queue, there was a family of three,” she said. “Some woke their kids to line up, and some had strollers. But everyone was cooperative and quiet, as we know some volunteers and medical workers worked very hard and they’ve been there all this time without rest.”

China’s approach has evolved since the coronavirus first emerged, when Beijing initially put harsh restrictions on hundreds of millions of people. Today its lockdowns are focused on neighborhoods rather than cities or provinces. China has made vaccination the centerpiece of its strategy.

Still, many of the core tenets remain for a huge and densely populated country: vast testing, strict limits on movement and intense scrutiny of arrivals from other countries.

Foreign businesses have worried that those limits on international travelers could snarl their plans. A European Union Chamber of Commerce survey released this week found that three-quarters of member companies said they had been adversely affected by travel restrictions, usually by hindering them from bringing in key engineers or executives.

“…To Fight New Outbreak…” Yeah, new boss same as the old boss. But where is the virus???

No one can get a “sample” because they do not want ppl to know about the nano tech in the bio weapon “Covid 19”. You want to cure your COVID? Taser yourself.

Let us now ban all travel from and to China.
Forever.

The US and Europe are NEXT, it was planned years ago at Davos manufactured PANDEMIC and FORCED VACCINATION to look like we are “fighting” the virus while hiding the real agenda : population reduction How many people died in China from COVID 19 lately ? Millions ? NOPE in the entire world as today 3,7 million died worldwide on a population of 7.8 Billion So how the Chinese government can get away with a FAKE PANDEMIC ? that has a 0,5% death rate? the same way western Governments do : forcing the population to take the unreliable RT PCR test… Read more »

Variants… you mean those which the fraud “vaccines” engender in the “Vaxxed” human Petrie dishes who become super carriers to infect those too smart to get the eugenics jab?

[…] China has to lock down a city and does mass testing due to a new outbreak of Covid 19.  Chinese politics.  China Redux: COVID Lockdowns Return To Fight New Outbreak – Don’t get too comfortable with any U.S. relaxation of COVID restrictions because China is not done… […]