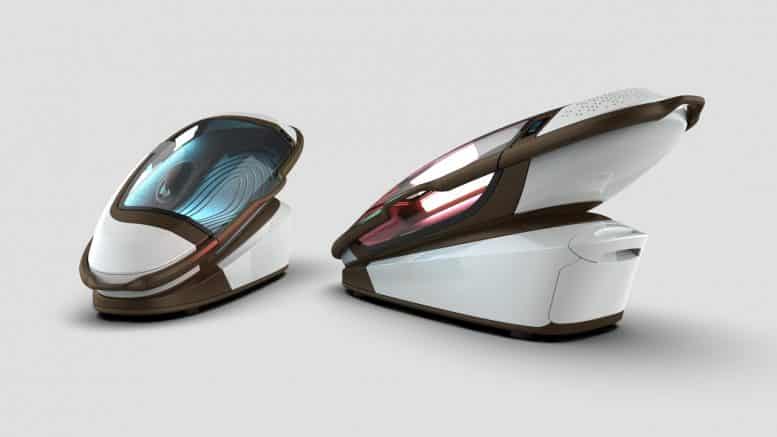 A rendering of the Sarco ‘suicide machine.’ Image: Philip Nitschke

With a twisted sense of value on human life, suicide machines will now be available as ‘open source’ plans for anyone in the world to download and create. Propaganda will convince many weakened minds that it is in the best interest of the planet if they were to check out early. This is reminiscent of the movie Soylent Green, where people voluntarily checked into euthanasia centers to be killed. ⁃ TN Editor

A controversial suicide pod that enables its occupant to kill themselves at a press of a button went on display at Amsterdam funeral show on Saturday.

Called the “Sarco”, short for sarcophagus, the 3D-printed machine invented by Australian euthanasia activist Philip Nitschke and Dutch designer Alexander Bannink comes with a detachable coffin, mounted on a stand that contains a nitrogen canister.

“The person who wants to die presses the button and the capsule is filled with nitrogen. He or she will feel a bit dizzy but will then rapidly lose consciousness and die,” said Nitschke, who has been dubbed “Dr Death” for his work to legalise euthanasia.

The “Sarco” is a device “to provide people with a death when they wish to die,” Nitschke told AFP.

The inventors put a model of the device on display, together with a set of virtual reality glasses to give visitors a true-to-life experience of what it would be like to sit in the pod, before ultimately pressing the button.

Nitschke said he aimed to build the first fully-functioning pod before the end of the year.

After that, the design will be put online as an open-source document for people to download.

“That means that anybody who wants to build the machine can download the plans and 3D-print their own device,” Nitschke said.

Asked about the controversy surrounding euthanasia and legal hurdles, Nitschke said: “In many countries suicide is not against the law, only assisting a person to commit suicide is.”

“This is a situation where one person chooses to press a button… rather than for instance standing in front of a train.”

“I believe it’s a fundamental human right (to choose when to die). It’s not just some medical privilege for the very sick. If you’ve got the precious gift of life, you should be able to give that gift away at the time of your choosing,” Nitschke said.