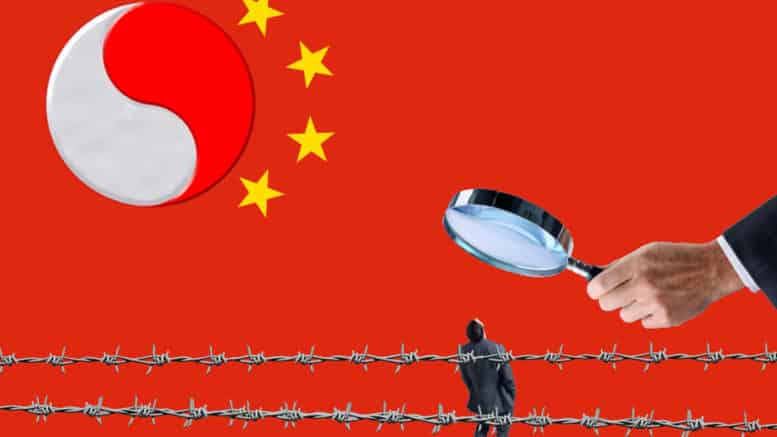 Please Share This Story!
PDF 📄
This is a thoughtful article, but it attributes China’s totalitarianism to Communism instead of Technocracy, which is a common misconception. China prizes Technocracy’s “science of social engineering” more than anything else and is creating a Scientific Dictatorship. ⁃ TN Editor

The 30th anniversary on June 4 of the Chinese regime’s 1989 massacre of pro-democracy protesters in Tiananmen Square served to highlight the extreme censorship in China under the leadership of the Chinese Communist Party (CCP) and President Xi Jinping.

The Tiananmen anniversary is referred to euphemistically in mainland China, as ‘the June Fourth Incident’. The regime there evidently fears that any talk, let alone public commemoration, of that historical event will stir up anti-regime unrest, which could endanger the Chinese Communist Party’s absolute power.

The internet in China is under control of the Chinese Communist Party, especially through the rigorous censorship practiced by the party’s top internet censor, the Cyberspace Administration of China (CAC), established in 2014. In May 2017, according to a Reuters report, the CAC introduced strict guidelines requiring all internet platforms that produce or distribute news “to be managed by party-sanctioned editorial staff” who have been “approved by the national or local government internet and information offices, while their workers must get training and reporting credentials from the central government”.

Freedom House, in “Freedom on the Net 2018,” its 2018 assessment of freedom on the internet in 65 countries, placed China dead last. Reporters without Borders, in its 2019 worldwide index of press freedom, ranked China 177 out of 180 countries, surpassed only by Eritrea, North Korea and Turkmenistan. The Committee to Protect Journalists (CPJ), at the time of its 2018 prison census, counted at least 47 journalists jailed in China, but according to the CPJ, the number could be much higher: “authorities are deliberately preventing information from getting out”. In March 2019, the CPJ was investigating at least a dozen additional cases, including the arrests in December 2018 of 45 contributors to the human rights and religious-liberty magazine, Bitter Winter, which China targets as a “foreign hostile website“.

Search terms are also blocked on such ‘sensitive’ occasions. In the past, even common, innocuous words such as ‘today’ or ‘tomorrow’ have been blocked.

For the anniversary of Tiananmen, the Chinese Communist Party reportedlybegan its crackdown in January 2019: On January 3, the Cyberspace Administration of China announced on its website that it had launched a new campaign against “negative and harmful information” on the internet. The campaign was to last for six months — coinciding with Tiananmen’s June 4 anniversary. The definition of “negative and harmful information” was all-inclusive: Any content that was “pornographic, vulgar, violent, horrific, fraudulent, superstitious, abusive, threatening, inflammatory, rumor, and sensational,” or related to “gambling,” or spreading “bad lifestyles and bad culture” had to be removed from every conceivable internet platform. The CAC added, “Those who let illegal behavior go free will not be tolerated but be severely punished”.

In China, censorship, now largely automated, has reached “unprecedented levels of accuracy, aided by machine learning and voice and image recognition”, according to a recent Reuters report. It quotes Chinese censors as commenting:

China’s severe censorship runs parallel to its severe suppression of religious freedom. The President of the Religious Freedom Institute, Thomas F. Farr, at a November 2018 hearing at the Congressional-Executive Commission on China, described China’s religious suppression as “the most systematic and brutal attempt to control Chinese religious communities since the Cultural Revolution”. As in other Communist regimes, such as that of the former Soviet Union, the Communist ideology does not tolerate any competing narratives.

“Religion is a source of authority, and an object of fidelity, that is greater than the state,” Farr wrote. “This characteristic of religion has always been anathema to history’s totalitarian despots, such as Stalin, Hitler, and Mao…”

The brutal religious and cultural oppression of Tibetans in China has been ongoing for nearly 70 years, but China has not only sought to destroy the Tibetan religion. Christianity, for instance, was seen from the beginning as a threat to the People’s Republic of China when it was established in 1949. “This was especially true at the height of the Cultural Revolution (1966–1976), when places of worship were demolished, closed, or reappropriated and religious practices were banned”, according to the Council on Foreign Relations. Some Christian clerics have been imprisoned for nearly 30 years. In recent years, oppression of Christians in China has apparently surged. Since the late 1990s, the Chinese regime has also targeted the Falun Gong.

China has been shutting down churches and removing crosses. They have been replaced with the national flag, and images of Jesus have been replaced with pictures of President Xi Jinping. Children, future bearers of the Communist ideology, have been banned from attending church. In September 2018, China shut down one of the largest underground churches, Beijing’s Zion Church. In December 2018, the pastor of the underground Early Rain Church, Wang Yi, and his wife were arrested and charged with ‘inciting subversion’, a crime punishable by up to 15 years in prison. Along with the pastor and his wife, more than 100 church members were also arrested. In April 2019, Chinese authorities forcibly took away an underground Catholic priest, Father Peter Zhang Guangjun, just after he celebrated Palm Sunday Mass. He was reportedly the third Catholic priest to be taken by the authorities in one month.

According to a confidential document obtained by Bitter Winter, China is currently also getting ready for a clampdown on Christian churches with ties with foreign religious communities.