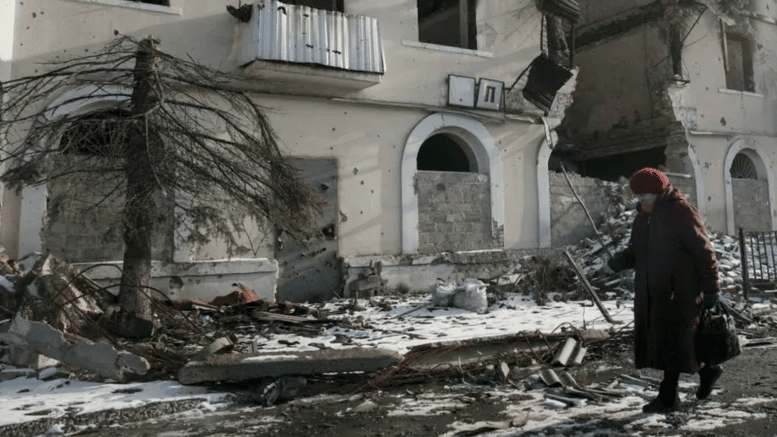 Please Share This Story!
PDF 📄
Those who provoked Russia to invade Ukraine in the first place would now have the American taxpayer rebuild the nation at a cost of $1 trillion, assuming that the war will eventually come to an end. ⁃ TN Editor

Ukrainian President Volodymyr Zelensky during a video address on Tuesday estimated it will cost more than $1 trillion to rebuild his country following the Russian assault, now over nine months in. If this number sounds absolutely shocking and unrealistic… it is, given this would be five times Ukraine’s entire GDP.

“The reconstruction of our country will become the most momentous economic, technological, and humanitarian project of our time. Even now, we engage dozens of our partner countries to rebuild Ukraine,” Zelensky said during his nightly video address Tuesday, translated by Newsweek. “The total volume of work amounts to over a trillion dollars.”

Further down in the article, it is mentioned that the Center for Strategic Studies (CSIS) is the “think tank” in question. CSIS is one of the premier agglomerations of Trilateral Commission members in the United States, with no less than six Trustees belonging to the “founding fathers” of the “New International Economic Order”, aka Technocracy, back in 1973. They are:

Notably, the former Speaker of the U.S. House of Representatives, Paul Ryan, is also a Trustee of CSIS. He is not a member of the Commission, however.

CSIS made the call to “invest” in Ukraine on November 22, 2022, arguing that critics who would wash their hands of the Ukraine sink hole, should realize that the abandoning reconstruction aid “ignores the fact that the U.S. has already obtained major strategic benefits from aiding Ukraine, and that such aid is one of the best investments the U.S. can make in competing with Putin’s Russia and in advancing its own security.”

CSIS says its our moral duty to throw hundreds of billions of dollars into Ukraine:

Quite from the moral and ethical nature of abandoning a democracy of more than 43 million people who did nothing to provoke a Russian attack, it is hard to believe that any current strategic partner or ally would then fully trust the United States.

CSIS is right to note that the citizens of Ukraine “did nothing to provoke a Russian attack” and to imply that the attack was actually provoked. We should be asking themn exactly who did provoke Russia to attack Ukraine and more specifically, what was CSIS’ role in that provocation?

Hunter will do the legal work. LOL

There is one blogger who thinks that Putin’s attack on Ukraine is a feint to make the West empty its arsenal. And when nothing is left but buckshot, Putin and his Chinese allies will directly attack the West.
https://onceuponatimeinthewest1.wordpress.com/2022/11/30/communist-bloc-military-updates-moscow-beijing-axis-continues-its-war-preps-against-usa-nato-allies-as-latest-joint-air-force-drill-intrudes-into-south-korean-adiz-rok-air-force-scrambles-fighter-j/

All politicians are filth. They are puppets for psychopaths. Thinks about it, these people were handed a plan to kill off most of humanity and enslave the rest and they all said “ok, no problem”. Not a moral fiber between them. Voting isn’t going to save you. Stop waiting for some hero to come along and fix everything. It’s not happening.