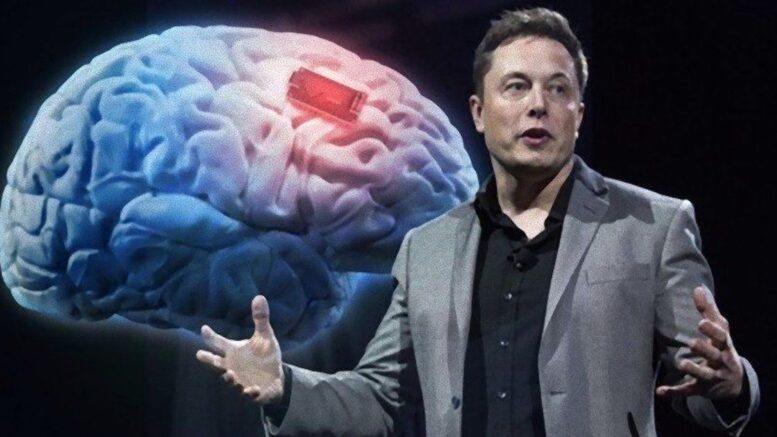 Please Share This Story!
PDF 📄
Elon Musk, the consummate Technocrat and Transhuman, is almost ready to connect your brain directly to the Internet: “According to Bloomberg, the billionaire is also aiming for the device to one day become mainstream and allow for the transfer of information between humans and machines. ⁃ TN Editor

At an event at its Fremont, California headquarters on Wednesday night, Elon Musk’s Neuralink Corp. announced that it is hoping to start inserting its coin-sized computing brain implant into human patients within six months.

According to Bloomberg, the brain-computer interface (BCI), will “allow a person with a debilitating condition — such as amyotrophic lateral sclerosis (ALS) or the aftereffects of a stroke — to communicate via their thoughts.”

The CEO of Twitter and owner of Tesla wrote on the social media platform Wednesday night in response to a write up by the outlet about the device, “We are now confident that the Neuralink device is ready for humans, so timing is a function of working through the FDA approval process.”

We are now confident that the Neuralink device is ready for humans, so timing is a function of working through the FDA approval process

The device translates neuronal activity into data that could be interpreted by a computer and during the event, Musk revealed the company is developing implants that can go into the spinal cord to potentially restore movement in someone who is paralyzed and an ocular implant to improve or restore human vision.

Musk said at the event, “As miraculous as that may sound, we are confident that it is possible to restore full-body functionality to someone who has a severed spinal cord.”

The product which consists of a small device and electrode-laced wires, is implanted into the brain using a robot that carves out a piece of a person’s skull then implants the wires into their brain tissue.

Neuralink’s recent focus has been on making sure the robot can perform surgeries quickly, with minimal harm to the human body. The billionaire is optimistic that one day a person can get brain implants as a quick outpatient procedure.

Is that before or after I’m held down in the gulag for non compliance with the great theft and all my wrong think needs sucking out of me along with my soul into the hands of some rich little elfs satanic agenda?

You first Elon Musk. I am happy with the way God designed me. I will not have any of Musk’s technology invade me. God save us from this psychopath.

Musk is making waves with his Twitter activities, promoting free speech. I wonder what is going on. Is he using Twitter to create a market for his brain implants, thinking that if he promotes free speech, it will give the impression that he is trustworthy, and that impression will rub off on his “brain implants”?

Twitter, now more than ever will be a honey pot. He wants free speech so that your local and state authorities can pinpoint you and delete you.

TWITTER – will it be transformed and rebuilt on BLOCKCHAIN? Is this the real reason Musk bought Twitter? I just found this French ad on youtube. It was linked to a page with a report to download. https://bit.ly/3uh4YwT Get an ENGLISH translation here: https://bit.ly/3OWkYhb https://www.youtube.com/watch?v=3z6JAbjlAQs On December 20, 2021, Technocracy.News quoted the Asia Times: “Flashback: Social Credit And The Dark Side Of Blockchain” https://www.technocracy.news/flashback-social-credit-and-the-dark-side-of-blockchain/ However, MUSK may have bought Twitter precisely to make it the first social network in history linked to blockchain. When transcribed and translated, this video says: “This is already crazy, but where it gets even more interesting is that he… Read more »

And so many see Musk as the hero for freedom.

People are, in most cases, very easily deceived, especially when provided with very little real information.

Not on me they won’t.