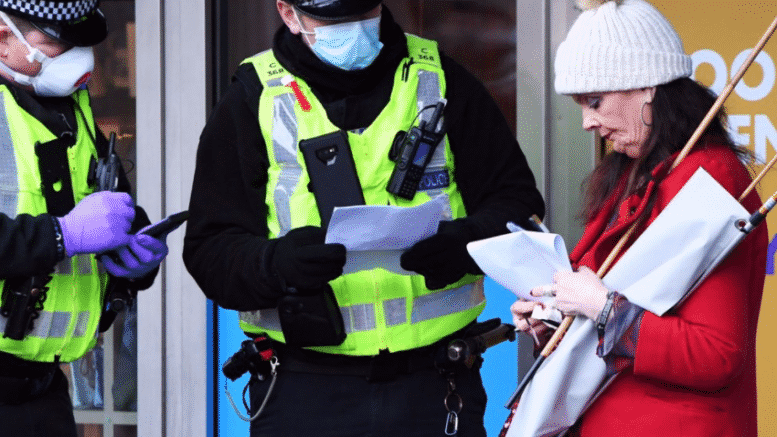 Please Share This Story!
PDF 📄
Those who took the vaccine had the expectation that they were “free” from government scrutiny and could return to normal life; they were sorely disappointed as they now discover a clandestine surveillance effort to track their every move. ⁃ TN Editor

The British government has been reported to have secretly surveilled the movements of millions of citizens to track changes in behaviour following the administration of coronavirus vaccines.

A report from the SPI-B committee of government scientists has revealed that the government tracked up to ten per cent of the British public’s phones in February, all without permission or notification to the public.

The report, which was seen by the Sunday Telegraph, said that researchers at Oxford University for the SPI-B — a subgroup of the British government’s SAGE quango — monitored the behavioural changes of vaccinated Britons through “CDR [call data records] with corresponding location observations”.

Through tracking “cell phone mobility data for 10 per cent of the British population”, the Oxford University team was able to determine that 4,254 people had received a coronavirus vaccine at the time.

Researchers went to track those individuals through forty “CDR [call data records] with corresponding location observations” daily. They studied the changes in the behaviour of those vaccinated by comparing the week before and the week after the administering of the jab.

The report revealed that “various robustness checks are undertaken by age, distance from home to vaccination point” by the government group, which also studied “gyration (radius of gyration on vaccination day), time (opening hours) and home (do they go home directly after vaccination)”.

Through the behavioural monitoring of vaccinated people compared to a control group, the researchers were able to determine that “average pre-vaccination mobility increased by 218 meters”.

Silkie Carlo, the director of the civil liberties pressure group Big Brother Watch said in response to the report: “No one expects that by going to get a vaccine they will be tracked and monitored by their own Government.

“This is deeply chilling and could be extremely damaging to public trust in medical confidentiality.

“Between looming Covid passports and vaccine phone surveillance, this Government is turning Britain into a Big Brother state under the cover of Covid. This should be a wake-up call to us all.”

I have read a number of articles and seen videos by the WHO, Fauci, and various other technocrats/globalist groups stating masks, rolling lockdowns, “social” distancing, and tracking and tracing our every move with vaccines (annually at least) must be accepted as permanent. Our new normal. That made me determine not to get jabbed–even before I found out the scary stuff I have.

I’m waiting in vain for somebody to say the obvious. If you don’t want to be tracked and traced and live in a digital prison for the rest of your life, then throw away your wretched smartphone. Our political masters have no need to chip you when you cling to your precious little widget like baby to its dummy. Bin the bloody thing. At a stroke you’ll get your brain and your life back, scupper the Great Reset and (oh, joy!) wipe that smug smile of Mark Zuckerberg’s ugly mug. What’s not to like.