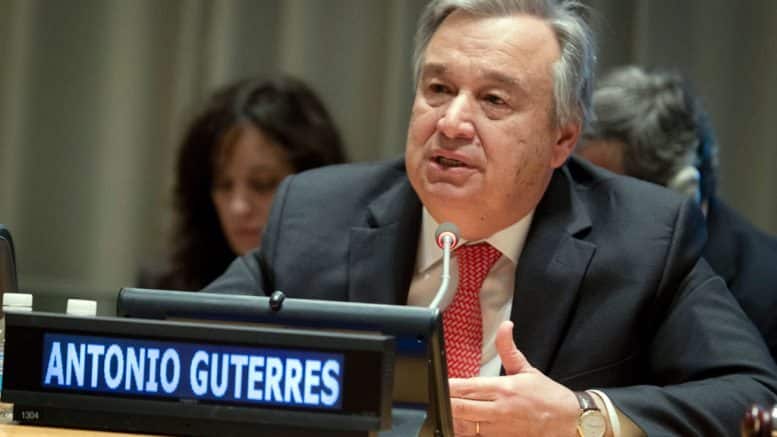 Please Share This Story!
PDF 📄
The head of the UN states, “We must make lying wrong again.” This global gaslighting is astonishing after the UN has amply displayed its own culture of continuous lies on every front, fabricating and corrupting data to show whatever emergency situation that drives their Technocrat agenda. ⁃ TN Editor

U.N. Secretary-General Antonio Guterres issued a dire warning that the world is moving in the wrong direction and faces “a pivotal moment” where continuing business as usual could lead to a breakdown of global order and a future of perpetual crisis. Changing course could signal a breakthrough to a greener and safer future, he said.

The U.N. chief said the world’s nations and people must reverse today’s dangerous trends and choose “the breakthrough scenario.”

The world is under “enormous stress” on almost every front, he said, and the COVID-19 pandemic was a wake-up call demonstrating the failure of nations to come together and take joint decisions to help all people in the face of a global life-threatening emergency.

Guterres said this “paralysis” extends far beyond COVID-19 to the failures to tackle the climate crisis and “our suicidal war on nature and the collapse of biodiversity,” the “unchecked inequality” undermining the cohesion of societies, and technology’s advances “without guard rails to protect us from its unforeseen consequences.”

In other signs of a more chaotic and insecure world, he pointed to rising poverty, hunger and gender inequality after decades of decline, the extreme risk to human life and the planet from nuclear war and a climate breakdown, and the inequality, discrimination and injustice bringing people into the streets to protest “while conspiracy theories and lies fuel deep divisions within societies.”

In a horizon-scanning report presented to the General Assembly and at a press conference Friday, Guterres said his vision for the “breakthrough scenario” to a greener and safer world is driven by “the principle of working together, recognizing that we are bound to each other and that no community or country, however powerful, can solve its challenges alone.”

The report — “Our Common Agenda” — is a response to last year’s declaration by world leaders on the 75th anniversary of the United Nations and the request from the assembly’s 193 member nations for the U.N. chief to make recommendations to address the challenges for global governance.

In today’s world, Guterres said, “Global decision-making is fixed on immediate gain, ignoring the long-term consequences of decisions — or indecision.”

He said multilateral institutions have proven to be “too weak and fragmented for today’s global challenges and risks.”

“And we need multilateralism with teeth,” he said.

In the report outlining his vision “to fix” the world, Guterres said immediate action is needed to protect the planet’s “most precious” assets from oceans to outer space, to ensure it is livable, and to deliver on the aspirations of people everywhere for peace and good health.

He called for an immediate global vaccination plan implemented by an emergency task force, saying “investing $50 billion in vaccinations now could add an estimated $9 trillion to the global economy in the next four years.”

The report proposes that a global Summit of the Future take place in 2023 that would not only look at all these issues but go beyond traditional security threats “to strengthen global governance of digital technology and outer space, and to manage future risks and crises,” he said.

It would also consider a New Agenda for Peace including measures to reduce strategic risks from nuclear weapons, cyber warfare and lethal autonomous weapons, which Guterres called one of humanity’s most destabilizing inventions.

He said the COVID-19 pandemic also exposed deficiencies in the global financial system.

To tackle these weaknesses and integrate the global financial system with other global priorities, Guterres proposed holding summits every two years of the 20 leading economies in the G20, the U.N.’s Economic and Social Council, the heads of international financial institutions including the International Monetary Fund and World Bank, and the U.N. secretary-general.

He also called for the correction of “a major blind spot in how we measure progress and prosperity,” saying Gross Domestic Product or GDP fails to account for “the incalculable social and environmental damage that may be caused by the pursuit of profit.”

“My report calls for new metrics that value the life and well-being of the many over short-term profit for the few,” Guterres said.

If they make it a world wide law to punish liars, the UN in it’s entirety would be doomed.

Nope! That jerk can go peddle his 💩💩💩 somewhere else, thanks just the same.

He said, “U.N. Secretary-General Antonio Guterres issued a dire warning that the world is moving in the wrong direction and faces “a pivotal moment” where continuing business as usual could lead to a breakdown of global order and a future of perpetual crisis. Changing course could signal a breakthrough to a greener and safer future, he said.” He is wicked, evil and a One World Government will not fix a thing. All the World Government will do is give them Power from Satan, everyone’s property, much wealth and a ticket to hell. Satan is a liar, he is the father… Read more »

This is something I’ve noticed. Now that the world has provided many years of worker bees making a few predators grotesquely wealthy, literally to the point they think they own the world? Now the predators are preventing the bees from making a profit, to keep them in place. The serfs don’t have to be bribed any longer – being allowed to make a profit for themselves – to put their persecutors in power any longer – it is done. Ketracel white for the botg…?

What happens if and when they achieve their dream of a world government with complete control? Actually, they’ll do something similar to what Alexander the Great was (correctly or incorrectly) reported to have done, once he’d finished conquering the known world at that time: he cried and said, “what now?” From here, there’s at least one outcome that’s guaranteed: they’ll start to turn on themselves.

The outcome is the fulfillment of Bible Prophecy. They will have one global leader who is a man completely possessed by Satan. Read the book of Revelation it will happen you can count on that. You want to escape? The good news: Christ died for your sins according to the scriptures and that he was buried and that he rose again the third day according to the scriptures. 1 Corinthians 15:1-4

They do turn on their group all the time. These greedy predators all want to run the world in their image–alone. Right now, for instance, they are infighting all ’round the globe as they present a consolidated front to the low-level thinkers in the FakeSM reports. DON’T BELIEVE IT. It’s all a lie. They are weak and arrogant.

The UNITED NATIONS spiritual litersture held at the UN’s spiritual center called Lucis Trust, it has a seat and owns the meditation room at the UN, also publishes and distributes UN material, the ENTIRE NEW WORLD ORDER ( globalization) agenda sits in this litersture and has been there for decades since the UN’s inception, in an article.called DESCENT AND SACRIFICE they say Lucifer is a misunderstood, sacrificing angel and savior of man!!!! In one of their books called EXTERNALIZATION of the HIERARCHY, they admit that something called THE SPIRITUAL HIERARCHY( whom they admit is not human, and does not work… Read more »

There is SO much wrong with his multiple statements and his focus, which begins with a ridiculously wrong assumption, that I can’t even address it. Apparently, he forgets that the very corporate bullies he addresses created the environment we sit in today–the pollution of the Earth. Of course, now it’s OUR fault, by association.

[…] UN Head Urgently States ‘We Need Multilateralism With Teeth’ This is the NWO looking to put together a world control army for control of the people. Those that resist will most likely be quickly killed. These are ruthless, murdering, psychopaths without any mercy. […]