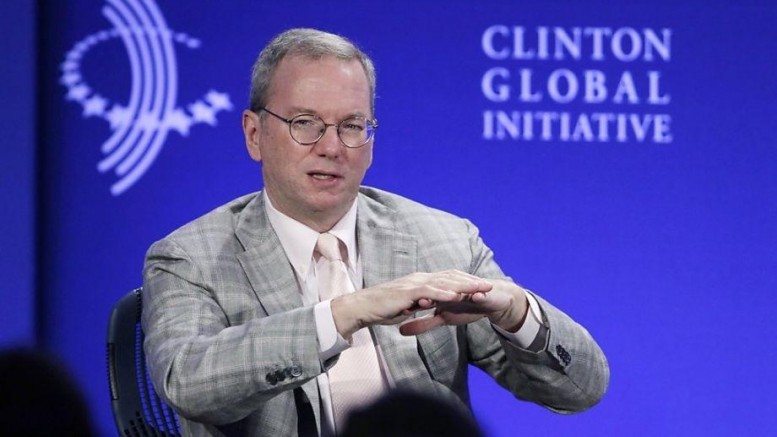 Eric Schmidt, CEO of Alphabet, Inc. and member of the Trilateral Commission (Wikileaks)

Ashton Carter, currently Obama’s Secretary of Defense, is a poster-boy for Technocracy. He is also a member of the elitist Trilateral Commission that has been promoting global Technocracy since its founding in 1973 by David Rockefeller and Zbigniew Brzezinski.

Carter has quietly assembled the Defense Innovation Advisory Board, which he claims will “advise the Pentagon on technology innovation issues.” As he recently announced new members, he stated,

[The board] “is charged with keeping DoD imbued with a culture of innovation in people, organizations, operations, and technology, to support people who innovate, those creative figures in our department who are willing to try new things, fail fast, and iterate; and also to ensure that we’re always doing everything we can to stay ahead of potential adversaries.”

According to Defense News, the members are:

While all of these could accurately be singled out as Technocrats, Carter has stacked the board with three of his elitist cronies from the Trilateral Commission.

Eric Schmidt is the head of Alphabet, which includes Google. Schmidt admittedly seeks to use technology to control the entire planet, and is the leading proponent of Transhumanism.

Marne Levine, the chief operating officer at Instagram, formerly served as Vice President of Global Public Policy for Facebook. At Facebook, Levine worked with governments and organizations to understand and adapt to its technology and global policies.

Jeff Bezos, founder and CEO of Amazon, Inc.,  is another tech titan who has dreams of taking over the world economically.

Collectively, these people represent many other companies and organizations through participation in their boards of directors.

Should the Trilateral Commission have this kind of access to and influence within the Department of Defense? Given their goal of creating a “New International Economic Order” (which is Technocracy, or Sustainable Development), certainly not.

Great research and information, thank you. Nothing to be concerned about at all…..or is it? What do a bunch of business guys and academicitions have to do with defense unless it is to line their pockets with contracts? Alternately have they used their business positions to gain military power and control? As an aside- I looked at the Clinton Foundation(CF) website because of the logo behind Eric Schmidt. One of the ways to help the world is to buy some carbon credits for $25 per credit that the CF is offering. They have about $2,313,750 worth of carbon credits for… Read more »