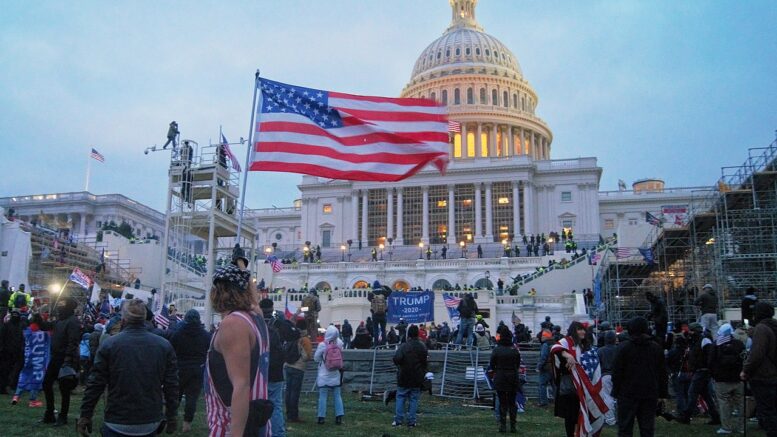 Please Share This Story!
PDF 📄
The focus on the 9/11 war on terror was radical Islamic militants. The 1/6 war on terror pivots internally to declare conservative Americans as domestic terrorists. Will the current Administration refocus the Intelligence and military communities against American citizens? There are already a chorus of calls to do just that. ⁃ TN Editor

The last two weeks have ushered in a wave of new domestic police powers and rhetoric in the name of fighting “terrorism” that are carbon copies of many of the worst excesses of the first War on Terror that began nearly twenty years ago. This trend shows no sign of receding as we move farther from the January 6 Capitol riot. The opposite is true: it is intensifying.

We have witnessed an orgy of censorship from Silicon Valley monopolies with calls for far more aggressive speech policing, a visibly militarized Washington, D.C. featuring a non-ironically named “Green Zone,” vows from the incoming president and his key allies for a new anti-domestic terrorism bill, and frequent accusations of “sedition,” “treason,” and “terrorism” against members of Congress and citizens. This is all driven by a radical expansion of the meaning of “incitement to violence.” It is accompanied by viral-on-social-media pleas that one work with the FBI to turn in one’s fellow citizens (See Something, Say Something!) and demands for a new system of domestic surveillance.

Underlying all of this are immediate insinuations that anyone questioning any of this must, by virtue of these doubts, harbor sympathy for the Terrorists and their neo-Nazi, white supremacist ideology. Liberals have spent so many years now in a tight alliance with neocons and the CIA that they are making the 2002 version of John Ashcroft look like the President of the (old-school) ACLU.

The U.S. Department of Homeland Security website, touting a trademarked phrase licensed to it in 2010 by the City of New York, urging citizens to report “suspicious activity” to the FBI and other security state agencies

The more honest proponents of this new domestic War on Terror are explicitly admitting that they want to model it on the first one. A New York Times reporter noted on Monday that a “former intelligence official on PBS NewsHour” said “that the US should think about a ‘9/11 Commission’ for domestic extremism and consider applying some of the lessons from the fight against Al Qaeda here at home.” More amazingly, Gen. Stanley McChrystal — for years head of Joint Special Operations Command in Iraq and the commander of the war in Afghanistan — explicitly compared that war to this new one, speaking to Yahoo News:

I did see a similar dynamic in the evolution of al-Qaida in Iraq, where a whole generation of angry Arab youth with very poor prospects followed a powerful leader who promised to take them back in time to a better place, and he led them to embrace an ideology that justified their violence. This is now happening in America….I think we’re much further along in this radicalization process, and facing a much deeper problem as a country, than most Americans realize.”

Anyone who, despite all this, still harbors lingering doubts that the Capitol riot is and will be the neoliberal 9/11, and that a new War on Terror is being implemented in its name, need only watch the two short video clips below, which will clear their doubts for good. It is like being catapulted by an unholy time machine back to Paul Wolfowitz’s 2002 messaging lab.

The first video, flagged by Tom Elliott, is from Monday morning’s Morning Joe program on MSNBC (the show that arguably did more to help Donald Trump become the GOP nominee than any other). It features Jeremy Bash — one of the seemingly countless employees of TV news networks who previously worked in Obama’s CIA and Pentagon — demanding that, in response to the Capitol riot, “we reset our entire intelligence approach,” including “look[ing] at greater surveillance of them,” adding: “the FBI is going to have to run confidential sources.” See if you detect any differences between what CIA operatives and neocons were saying in 2002 when demanding the Patriot Act and greater FBI and NSA surveillance and what this CIA-official-turned-NBC-News-analyst is saying here:

The second video features the amazing declaration from former Facebook security official Alex Stamos, talking to the very concerned CNN host Brian Stelter, about the need for social media companies to use the same tactics against U.S. citizens that they used to remove ISIS from the internet — “in collaboration with law enforcement” — and that those tactics should be directly aimed at what he calls extremist “conservative influencers.”

“Press freedoms are being abused by these actors,” the former Facebook executive proclaimed. Stamos noted how generous he and his comrades have been up until now: “We have given a lot of leeway — both in the traditional media and in social media — to people with a very broad range of views.” But no more. Now is the time to “get us all back in the same consensual reality.”

In a moment of unintended candor, Stamos noted the real problem: “there are people on YouTube, for example, that have a larger audience than people on daytime CNN” — and it’s time for CNN and other mainstream outlets to seize the monopoly on information dissemination to which they are divinely entitled by taking away the platforms of those whom people actually want to watch and listen to:

(If still not convinced, and if you can endure it, you can also watch MSNBC’s Joe Scarborough and Mika Brzezinski literally screaming that one needed remedy to the Capitol riot is that the Biden administration must “shutdown” Facebook. Shutdown Facebook).

Calls for a War on Terror sequel — a domestic version complete with surveillance and censorship — are not confined to ratings-deprived cable hosts and ghouls from the security state. The Wall Street Journal reports that “Mr. Biden has said he plans to make a priority of passing a law against domestic terrorism, and he has been urged to create a White House post overseeing the fight against ideologically inspired violent extremists and increasing funding to combat them.”

Meanwhile, Congressman Adam Schiff (D-CA) — not just one of the most dishonest members of Congress but also one of the most militaristic and authoritarian — has had a bill proposed since 2019 to simply amend the existing foreign anti-terrorism bill to allow the U.S. Government to invoke exactly the same powers at home against “domestic terrorists.”

Why would such new terrorism laws be needed in a country that already imprisons more of its citizens than any other country in the world as the result of a very aggressive set of criminal laws? What acts should be criminalized by new “domestic terrorism” laws that are not already deemed criminal? They never say, almost certainly because — just as was true of the first set of new War on Terror laws — their real aim is to criminalize that which should not be criminalized: speech, association, protests, opposition to the new ruling coalition.

This exactly what communist/fascist nations do, purge any and all resistance to their ideology and then they roll out their true face as to what and where they will be taking the country

this is one of the best site , i ever came across with truth about the illuminati plans , great job and thanks you ,

Does that mean we’ll see the end of the Portland-Seattle riots?