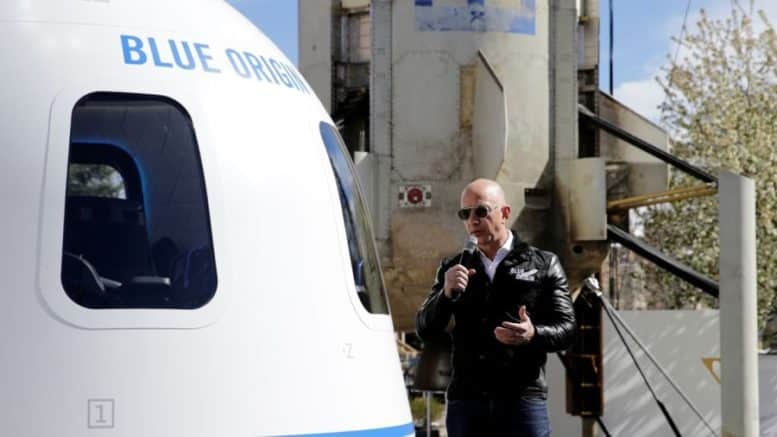 Posted By: Franklin Foer via The Atlantic October 11, 2019

This is the best article that I have yet seen that intentionally gets inside the head of Technocrat Jeff Bezos, head of Amazon and the richest man on planet earth. Bezos is building an empire that resembles Star Trek’s villainous Borg: swallowing entire societies by informing “You will be assimilated” and “Resistance is futile.” ⁃ TN Editor

Bezos’s ventures are by now so large and varied that it is difficult to truly comprehend the nature of his empire, much less the end point of his ambitions. What exactly does Jeff Bezos want? Or, to put it slightly differently, what does he believe? Given his power over the world, these are not small questions. Yet he largely keeps his intentions to himself; many longtime colleagues can’t recall him ever expressing a political opinion. To replay a loop of his interviews from Amazon’s quarter century of existence is to listen to him retell the same unrevealing anecdotes over and over.

To better understand him, I spent five months speaking with current and former Amazon executives, as well as people at the company’s rivals and scholarly observers. Bezos himself declined to participate in this story, and current employees would speak to me only off the record. Even former staffers largely preferred to remain anonymous, assuming that they might eventually wish to work for a business somehow entwined with Bezos’s sprawling concerns.

In the course of these conversations, my view of Bezos began to shift. Many of my assumptions about the man melted away; admiration jostled with continued unease. And I was left with a new sense of his endgame.

Bezos loves the word relentless—it appears again and again in his closely read annual letters to shareholders—and I had always assumed that his aim was domination for its own sake. In an era that celebrates corporate gigantism, he seemed determined to be the biggest of them all. But to say that Bezos’s ultimate goal is dominion over the planet is to misunderstand him. His ambitions are not bound by the gravitational pull of the Earth.

efore bezos settled on Amazon.com, he toyed with naming his unlaunched store MakeItSo.com. He entertained using the phrase because he couldn’t contain a long-standing enthusiasm. The rejected moniker was a favored utterance of a man Bezos idolizes: the captain of the starship USS Enterprise-D, Jean-Luc Picard.

Bezos is unabashed in his fanaticism for Star Trek and its many spin-offs. He has a holding company called Zefram, which honors the character who invented warp drive. He persuaded the makers of the film Star Trek Beyond to give him a cameo as a Starfleet official. He named his dog Kamala, after a woman who appears in an episode as Picard’s “perfect” but unattainable mate. As time has passed, Bezos and Picard have physically converged. Like the interstellar explorer, portrayed by Patrick Stewart, Bezos shaved the remnant strands on his high-gloss pate and acquired a cast-iron physique. A friend once said that Bezos adopted his strenuous fitness regime in anticipation of the day that he, too, would journey to the heavens.

When reporters tracked down Bezos’s high-school girlfriend, she said, “The reason he’s earning so much money is to get to outer space.” This assessment hardly required a leap of imagination. As the valedictorian of Miami Palmetto Senior High School’s class of 1982, Bezos used his graduation speech to unfurl his vision for humanity. He dreamed aloud of the day when millions of his fellow earthlings would relocate to colonies in space. A local newspaper reported that his intention was “to get all people off the Earth and see it turned into a huge national park.”

Most mortals eventually jettison teenage dreams, but Bezos remains passionately committed to his, even as he has come to control more and more of the here and now. Critics have chided him for philanthropic stinginess, at least relative to his wealth, but the thing Bezos considers his primary humanitarian contribution isn’t properly charitable. It’s a profit-seeking company called Blue Origin, dedicated to fulfilling the prophecy of his high-school graduation speech. He funds that venture—which builds rockets, rovers, and the infrastructure that permits voyage beyond the Earth’s atmosphere—by selling about $1 billion of Amazon stock each year. More than his ownership of his behemoth company or of The Washington Post—and more than the $2 billion he’s pledged to nonprofits working on homelessness and education for low-income Americans—Bezos calls Blue Origin his “most important work.”

He considers the work so important because the threat it aims to counter is so grave. What worries Bezos is that in the coming generations the planet’s growing energy demands will outstrip its limited supply. The danger, he says, “is not necessarily extinction,” but stasis: “We will have to stop growing, which I think is a very bad future.” While others might fret that climate change will soon make the planet uninhabitable, the billionaire wrings his hands over the prospects of diminished growth. But the scenario he describes is indeed grim. Without enough energy to go around, rationing and starvation will ensue. Over the years, Bezos has made himself inaccessible to journalists asking questions about Amazon. But he shares his faith in space colonization with a preacher’s zeal: “We have to go to space to save Earth.”

Interesting. Certainly puts him into a different light, as goals go. However, he is not nor are his buddies the humans I’d like to have represent our species in space. Since he owns everything and can do whatever he wants he should take-off as soon as possible leaving Earth to the rest of humanity. I’m sure we’ll manage without him. Safe journey Bezos and please, don’t come back.

No, Jeffy, we need to go into space to find another habitual planet like Earth but younger that we can repopulate. This one is doomed and global warming is NOT the reason. Our Sun will wear out and our system will eventually die.

I’m confused. It seems that Jeff wants to save the planet but not the people. Uhhh, Jeff … I think the purpose for the planet “IS” the people. This is what happens when godless people listen to demons who say that humanity is an infection.