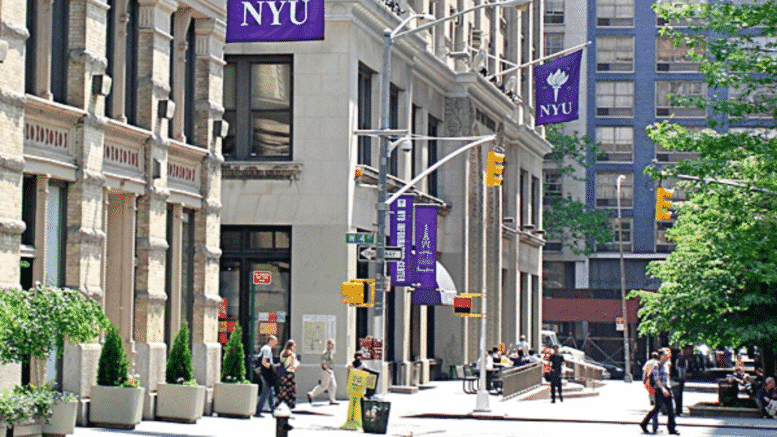 Please Share This Story!
PDF 📄
New York University Professor Mark Crispin Miller refuses to be cancelled by the propaganda-laced culture that he has forcefully exposed over the last 20 years. His battle is one that every American should be fighting to cancel the cancel culture. ⁃ TN Editor

In the video above, James Corbett of The Corbett Report interviews1 professor Mark Crispin Miller about mass persuasion and propaganda — topics he’s been teaching at the New York University Steinhardt School of Culture, Education and Human Development for the last two decades — and the current state of free speech.

Miller recently sued 19 of his department colleagues for libel after they signed a letter to the school dean demanding a review of Miller’s conduct. He points out that his course on propaganda is not focused on historical examples of mass persuasion but, rather, teaches his students to recognize and resist propaganda in real or recent times.

“This can be quite challenging,” he says. It’s rather easy to identify examples of propaganda that you do not agree with. It’s much more difficult when it’s something you care about, agree with or believe in; when it pushes your buttons. It requires you to detach, to take a bird’s-eye view and develop impartiality. You have to “make an attempt to think about it, critically,” Miller explains, and to look at both sides of the issue.

Unfortunately, as noted by Miller, getting the other side of the story is now becoming increasingly difficult, thanks to Big Tech censorship, which oftentimes filters out or blocks all but one viewpoint.

At the beginning of this last semester, Miller suggested his students take a deep dive into the current propaganda narratives at work. He pointed out that the COVID-19 crisis, which justified distance learning, self-isolation and separation from family and friends, was driven by very powerful propaganda narratives.

He stresses that he’s not saying the COVID-19 pandemic is a fraud or that the narratives are false — propaganda can be factually accurate — only that propaganda tends to be one-sided. It offers just one, nearly always biased, side of the story. Miller offered up the example of mask mandates. Previous randomized studies show that masks are ineffective as barriers against respiratory viruses such as influenza.

He instructed his students to read those papers, as well as more recent studies that might suggest there’s some benefit. He also instructed them to analyze potential conflicts of interest that might have influenced the findings, such as funding by Big Pharma or the Bill & Melinda Gates Foundation. He also warned them that when using Google search, biased articles will typically show up first, “as Google owns two pharmaceutical companies,” he explains.

As it turns out, one student asked to join his class late, which he accepted. Having missed these preliminary instructions and discussions about how to identify and study propaganda, the late-entry student took to Twitter to complain about the assignment to investigate mask narratives and demanded Miller be fired.

The department chair, without consulting with Miller, responded to the student’s tweet, saying the department would prioritize the matter and take steps to address it. The next day, the doctor who advises the NYU on its “insanely draconian COVID rules” and the dean emailed Miller’s students, without copying him on the correspondence, saying he had given them “dangerous misinformation” about masking.

Next, they demanded he cancel his propaganda course for the following semester. “I had no choice but to do that,” Miller says, “but I told them I’m doing it under protest.”

If this scenario strikes you as typical of the kind of intellectual and scientific censorship we’ve seen all around the world over the past year, you’re not alone. Miller recognized it too, and created an academic freedom petition,2 which at the time of this writing has been signed by nearly 36,000 people.

“All it asks is that NYU respect my academic freedom and set a good example for othr schools,” Miller says. “But I did it in the name of all professors, all journalists, all scientists, all doctors, activists and whistleblowers who have been gagged or punished for their dissidence, not just last year, but really, for decades.”

A month later, Miller received a letter from the dean, listing a number of accusations raised by 25 of his department colleagues, including “explicit hate speech,” “mounting attacks on students and others” in the community, “advocating for an unsafe learning environment,” “aggressions,” “microagressions” and discouraging his students from wearing masks.

“This is a very succinct description of the OPPOSITE of what I teach,” Miller says. “Every single one of these charges was false.” His colleagues had also demanded that a review of Miller’s conduct be performed to address these issues, which the dean approved, at the insistence of NYU lawyers. While the review was scheduled to wrap up in December 2020, Miller has yet to hear from the review board.

In response to that letter from the dean, Miller wrote a “cordial rebuttal,” in which he asked his colleagues to retract their accusations and issue an apology. He received no response. Getting no response after a follow-up letter, he then decided to file a libel suit against 19 of his 25 colleagues, excluding the junior members from the suit. He did it, he says, “because this kind of thing needs to end.”

At the time of this writing, Miller is waiting for the judge to rule on the defendants’ motion to dismiss the case. All of the documents relating to this case can be found on Miller’s website, MarkCrispinMiller.com.3 If you want to make a donation to help fund Miller’s legal case, you can do so on his GoFundMe page.4 Donations are held in an escrow account managed by his attorney and are reserved for legal expenses only.

As noted by Corbett, some of Miller’s students have clearly failed to live up to the adage that “It is the mark of an intelligent mind to entertain a thought without accepting it.” Indeed, this failure appears rampant these days, and is certainly not limited to the most naïve of students.

Interestingly, Miller cites a Japanese student, who some years ago told him that “Higher education in the United States is teaching students how to take offense,” which he thought was quite astute. “That’s absolutely true,” Miller says, “and students such as this young woman are used to being rewarded for saying these kinds of things.” He goes on to list “the censorship trifecta” — repressive tactics — that he was hit with:

Indeed, the CIA weaponized this catchphrase in 1967 to discredit writers who questioned the veracity of the Warren Report about the Kennedy assassination. To learn more about how conspiracy theory became “a thing,” read “Conspiracy Theory in America” by Lance deHaven-Smith.

2. “Hate speech and microagression,” which are a form of “social justice puritanism” that forbids discussing or questioning certain ideologies. Doing so means you’re mocking or ridiculing certain groups of people. This too is simply a way to shut people up and dissuade honest discussion that might reveal problems or chinks in whatever one-sided argument you’re told to blindly accept.

3. Spreading “dangerous misinformation.” Presently, and since the beginning of the COVID pandemic, questioning any part of the official narrative, no matter how incongruent, scientifically baseless or socially destructive it may be, means you are putting people in danger. Of course, at any other time, “dangerous misinformation” could refer to any narrative that the ruling class wants to maintain.

Part and parcel of all three of these tactics is the labeling of any science that deflates or disproves the propaganda narrative as “alternative science” or “fringe science.” It doesn’t matter if it’s published in prestigious peer-reviewed journals. It’s still dismissed as unreliable at best and misinformation at worst, incapable of standing up to the wisdom of the Dr. Fauci’s of the world.

The Deeper Significance of This Case

As noted by Corbett, Miller’s case goes beyond mere freedom of speech, which everyone ought to have, it goes into the issue of freedom of inquiry itself — the freedom to ask questions and ponder an issue or problem from multiple angles. Without the ability to think freely and express those thoughts, life itself becomes more or less meaningless.

An obvious question is, what is the source of this cancel-culture, censorship-embracing phenomenon? With regard to his own case, Miller believes it has been “steered,” although it is unclear by whom.

With just 79 followers on Twitter, the dissatisfied student’s tweet somehow spread like wildfire, resulting in three separate smear pieces in mainstream media. So, “it got some help,” Miller says.

Miller also questions the advice by NYU lawyers, who insisted the dean must set up a conduct review in response to the student’s complaint, even though the Foundation for Individual Rights in Education (FIRE) sent the president of NYU a detailed letter explaining why there were no legal, Constitutional grounds for Miller’s review.

Miller admits there may be several reasons — including financial and political — for the attacks on him, and reviews some of those details in the interview, but none of them has anything to do with what or how he teaches.

More broadly, it’s clear that the entire global COVID-19 narrative has been created and is steered from or by a core, unelected nongovernmental body. I often refer to this group as the technocratic elite, members of which are found in global NGOs, think-tanks, big business, academia, media, scientific centers, regulatory agencies and political strata around the world.

It is this thorough infiltration that allows for the global coordination we now see and experience — this lockstep activity around the world — which includes censorship of counter-narratives and divergent points of view, without regard for an individual’s background or expertise. Officially recognized, credible sources have been identified, and all others are dismissed as misinformation.