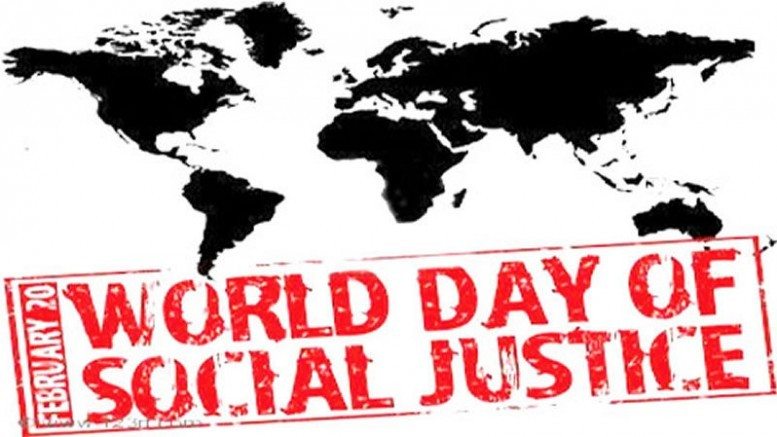 “Social Justice” is a phrase that you see everywhere today. Global Warming is all about social justice. The United Nations sponsors an annual World Day of Social Justice.  The Peaceful Uprising  website states that Climate Change Is A Social Justice Issue.

“For the United Nations, the pursuit of social justice for all is at the core of our global mission to promote development and human dignity. The adoption by the International Labour Organization of the Declaration on Social Justice for a Fair Globalization is just one recent example of the UN system’s commitment to social justice.” [emphasis added]

“As we strive for social justice and attempt to love our neighbors, are we relying on Christ, or are we relying on the military, political leaders, the government, church authorities, institutions, and abusive ideologies?” [emphasis added]

Social justice is a slippery bar of soap, but it surely sounds important, doesn’t it?

The term has a long history, definitive philosophy and uniformly disastrous results to any society who dared to embrace it. Plus, others have written extensively about it.

Spoiler ahead. According to famed Austrian economist F.A. Hayek, social justice is nothing more than “pseudo-ethics” that “fails every test which a system of moral rules must satisfy in order to secure a peace and voluntary co-operation of free men.”1

There are two historical threads that started in the same time-frame and have travelled forward like parallel train tracks.

The first attribution of the term went to a Jesuit priest, Luigi Taparelli in the 1840s and was based on the work of St. Thomas Aquinas. Taparelli argued that working for the common good was the highest calling. Redistribution of wealth was foreseen as the end, but he stopped short of calling for government intervention to get there.

The Catholic concept of social justice has not only matured, but is seen as the centerpiece of Pope Francis’ agenda for global harmony. The authoritative Jesuit organ, Ignatius Solidarity Network states clearly on its home page,

“Pope Francis’s emphasis on the plight of the poor and marginalized has brought new energy to the work of service and social justice in the Catholic Church.

“At the Ignatian Solidarity Network, our social justice education and advocacy mission is grounded in the spirituality of St. Ignatius of Loyola, Catholic Social Teaching and the prophetic call of the Gospels – each of which we see present in Pope Francis, both in word and action. His Jesuit formation, perspective as a Latin American and his gentle spirit provide inspire our work with individuals and institutions connected to the Jesuits and the larger church.” [emphasis added]

Also in the 1840s, Karl Marx and Frederich Engels were developing their ‘science of socialism’ that first produced The Communist Manifesto. To Marx, social justice would result by tearing down the elite class and raising up the oppressed class: in other words, stealing from the rich and giving to the poor. Today, we call this ‘wealth redistribution’.

For all of the altruistic goals of Marx and his followers, theory turned into practice and then the carnage began. Lenin and his Marxist revolutionaries “came to power with an ambitious programme of measures designed to ensure social justice and improve the lot of the poor.”2

“If one were to take paper and pencil to make an estimate of how many people were murdered or killed in battle because of the ideas of the French Revolution in their various stages, guises, and evolutionary forms, because of the ideas of equality, ethnic or racist identity, a ‘classless society,’ a ‘world safe for democracy,’ a ‘racially pure people,’ ‘true social justice achieved by social engineering’ – one would arrive at simply staggering sums. Even the Jewish holocaust offered by the National Socialists with five or six million dead would seem almost a drop in the bucket.” 3 [emphasis added]

Literally, at least 97 million died during the last century in the Communist dictatorships around the world: Russia, China, Southeast Asia, Africa, South America, etc. In fact, more died at the hands of their own Marxist rulers than died in all external wars, combined.

When the Catholic doctrine of social justice met the Marxist version in the 1970s, it gave full birth to the so-called Liberation Theology that ravaged large swaths of Africa and South America. This writer personally witnessed the horrible carnage in Rhodesia (now Zimbabwe) thanks to Liberation Theology.

Social justice is a major meme throughout the world, throughout the United Nations and throughout organized religions and even in the evangelical church. While the average person on the street would have a hard time defining social justice, it does have a very specific and historical doctrine that cannot be denied or minimized.

In short, social justice mostly focuses on economic justice, where income and wealth distribution is paramount. Ever-present is the notion that people as individuals are not worthy to serve their own needs, but rather they should serve the greater good and thus rely on the greater good to somehow meet their needs. This always elevates the needs of the community above the needs of individuals.

The United Nations is using social justice to promote its system of Sustainable Development, or Green Economy. This writer has carefully documented this to be the functional equivalent of Technocracy from the 1930s; a resource-based economic system without social classes, private property or liberty.

Churches are using social justice as a societal support system to justify the plans of the United Nations to transform the world into Sustainable Development. Do all church-goers recognize this? Hardly. But here is a tell-tale sign.

Whenever your pastor starts talking or writing about social justice, look out.

Whenever he or she starts quoting St. Loyola of Ignatius, the Catholic thought-leader preceding social justice in the 1840s, run.

The co-called ecumenical movement that brings various church movements together in “unity” (a social justice concept) has allowed the Catholic church to methodically and purposefully slip social justice dogma into the evangelical church. There is otherwise no Biblical mandate or support for the concept of social justice.

The world, including political, economic and religious, has seemingly gone mad over social justice.

However, We would do well to remember the lessons of the past century so that we don’t help to usher in the death of another 97 million world citizens. Social justice is an evil philosophy that must be repudiated at every opportunity.

Ed. Note: Shout-out and hearty thanks to Canadian researcher Carl Teichrib for his excellent research to document this important topic

A Fair Globalization Creating Opportunities For All (UN)

Great article, Patrick. Shocked by the turn that education is taking for implementing sustainable development, I recently wrote this Letter to the Editor: We should be clear that the new Victorian curriculum, to be operational in all state school communities and Catholic school communities by 2017, is a well constructed curriculum for making Victorian children and their communities socialist in thinking and practice for a one world economy. As a former teacher I am concerned that teachers shall be trained to question, analyse, and test children and their development will be measured and recorded. The new integrated curriculum aims to… Read more »

I know of no slogan by globalists that is not doublespeak. Social Justice means Heartless Tyranny. To have a one world government, a one world monoculture must be created, stripped of any inequality, especially family, as no two parents are equal, so get rid of them and have the state teach all the children the same ethics and culture. Our response is simple. Drop out and be independent. Arguing within the system perpetuates the system.

What about redistribution of wealth & income which goes to the top 2%, by manipulation & design? For 30 years? At the expense of everybody else, including Protestants? Leading to populism on the left and on the right?

I am not a defender of any “redistribution” schemes or “equality” schemes; I just believe in “one nation, under God, indivisible, with liberty and justice for all.”

Your understanding of “sustainability” is very skewed, & needs to be revisited. All the best.

Again, nothing is as it seems….
Organized religion is… organized!
Jesuits are not religious at all, they inherited the Templars’ occult science, and are in fact a highly organized, worldwide covert military order, specializing in deceit, murder and mega power plays.
And what better way then to usurp the educational system for throwing the masses off balance in regard with truth and reality…!
Everybody should read “The Extreme Oath of the Jesuits”, http://arcticbeacon.com/books/Extreme_Oath_of_the_Jesuits.pdf
And to obtain an extensive look into the history of the atheist Jesuits, see: http://amos37.com/jpoe/

Thank you for more fully reporting on the history of social justice. As a political buzz phrase, “social justice” is designed to be as irrefutably good as “mom” or “apple pie”. Yet for anyone with a deeper sense of history or economics, we are left with a sense of unease by such open-ended terms that so often have led to hatred, murder, and confiscation. The book which came to mind as I read this essay was _Why Nations Fail – The origins of Power, Prosperity, and Poverty_ http://whynationsfail.com/ History has shown again and again around the world that if people… Read more »