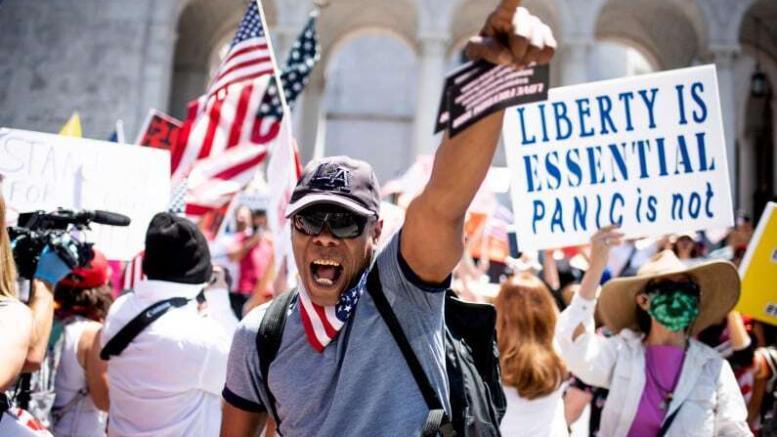 Constitutional sheriffs, judges and state legislators are rising up against tyrannical orders issued by state and local leaders and they deserve our support and encouragement. Here are just a few examples of courageous actions in the heat of battle to break the bands of tyranny.

In Oregon, a judge just declared Gov. Kate Brown’s emergency orders and lockdown to be ‘null and void’. A local story reported,

Baker County Circuit Judge Matthew Shirtcliff made the ruling Monday in a lawsuit brought by churches who had sued saying the social-distancing directives were unconstitutional.

The suit had also argued that emergency powers only last for a month and after that Brown would have needed legislative approval. The judge agreed. -KJW8

In a cold sweat, Gov. Brown convinced the Oregon Supreme Court to issue a stay on the lower court, while it considers the claims.

In Hood River, Washington, Klickitat County Sheriff Bob Songer is refusing to enforce some aspects of Gov. Jay Inslee’s social distancing order because they are unconstitutional.

The city council of Kelso, Washington, is considering a proclamation to defy Inslee’s continued shutdown order:

PROCLAMATION BY THE CITY COUNCIL OF KELSO, WASHINGTON IN REGARDS TO RECENT DIRECTIVES BY GOVERNOR JAY INSLEE

WHEREAS Governor Inslee’s recent Proclamation No.20-05 known as “Stay Home, Stay Healthy” and other follow-up Proclamations have caused confusion for business owners in Kelso and have failed to clearly identify which businesses are and aren’t allowed to operate and who is or isn’t allowed to reopen.

WHEREAS Washington State Citizens, Residents of Kelso, and State Lawmakers have challenged the constitutionality of the Governors Proclamations related to the “Essential and Non-Essential” businesses and a lawsuit has been filed in federal court.

WHEREAS business owners have become increasingly concerned over the duration of the proclamations with no clear and concise end to the orders and the failure of the orders to address the inherent differences between communities that differ in population density while inflicting major economic losses daily.

WHEREAS the proclamations require City of Kelso officials and Law Enforcement, passing the responsibility and the liability to the City.

NOW THEREFORE, BE IT RESOLVED that as the City Council of the City of Kelso, we hereby issue our own Proclamation to alleviate liability concerns to our city by instructing Law Enforcement and City Officials to not enforce Governor Inslee’s proclamations against businesses operating at any capacity.

The Governor does not have legal authority to force city employees, including Law Enforcement Officers to take action against businesses or citizens. Kelso City employees are not employed by the Governor of the state thus making the decision to enforce Governor Inslee’s orders a decision of the City Council regardless of the outcome of the Lawsuits determining constitutionality.

Businesses wishing to open and operate shall do so using responsible social distancing policies and procedures without fear of retribution or investigation from the City of Kelso.

“As Sheriff, I feel that my own 1st amendment constitutional right to free speech has been completely trampled on by a governor who has threatened my Offices’ reimbursement and grant funds as a tool to force me not to speak. I just can’t do this anymore. I stand with our citizens and businesses of DuPage County who have offered no trouble or no resistance to any rule we put upon them, no matter how strange.”

He correctly concluded, “We are not stormtroopers. We are peacekeepers.”

Police in New Jersey refused orders to shut down a gym that was practicing civil disobedience by opening its doors in defiance of the governor’s orders. The police did show up, but this is what they said:

“You’re all in violation of the executive order, but on that note, have a good day, everybody be safe.”

In Pennsylvania, Constitutional sheriffs in two counties are refusing to cite businesses that are defying Gov. Tom Wolf’s shutdown order.

“Our Office will not be enforcing any ‘order’ that violates our Constitutional Rights,” said the post on the Cumberland County Sheriff’s Department Facebook page. “Sheriff Anderson has stated ‘I have no intentions in turning local business owners into criminals’.”

“As your Sheriff, I have taken an Oath to uphold the Constitution of the United States and the State of Wisconsin. I have always respected the civil liberties of the citizens of Polk County.”

There are many more examples of the same types of resistance against tyrannical and unconstitutional orders by governors, mayors and other county officials.

It is reported that at least 60 sheriffs in more than twelve states are publicly opposing unconstitutional orders issued by governors.

Of course, you will not see any feature stories about the ‘resistance’ in America. To the contrary, major media is lambasting all such actions as ludicrous, short-sighted, selfish and harmful.

America, it’s way past time for you to rise up and follow the lead of courageous and constitutional judges, sheriffs, local and state legislators. They are out on a limb for YOU and they need your help and support.

Those that serve within our governments, state and federal, were never delegated such powers. “The Constitution of the United States is a law for rulers and people, equally in war and peace, and covers with the shield of its protection all classes of men, at all times, and under all circumstances. No doctrine involving more pernicious consequences was ever invented by the wit of man than that any of its provisions can be suspended during any of the great exigencies of government. Such a doctrine leads directly to anarchy or despotism.” The Supreme Court of the United States, 1866 “Emergency… Read more »

Here’s additional anecdotal info. re: this article. Adam Fortney, the Sheriff of Snohomish, 3rd largest county in WA, has also chosen not to enforce Gov Inslee’s Stay At Home COVID order. Fortney said he was elected to uphold the constitution and what the Governor is doing is unconstitutional so he won’t back down. As a result our AG Bob Ferguson is threatening legal action. In concert, a useful idiot liberal homeowner filed a recall petition against the Sheriff using GO Fund Me to finance professional petition gatherers. Finally, PA Fitness Gym, (also in Snoho. County) opened last week, following all… Read more »

http://johnadamscenter.com/why-john-adams/ This came about because our dear leader will not allow people to go to church. Course I guess it doesn’t matter anymore (church is full of false teachers), Oregon is ruled by devils as Democrats only get elected to fundamentally change America into a godless Utopia (which is ‘do what thou wilt’ said Crowley a devil himself). “The Constitution is for a moral people and it is wholly inadequate for any other”. Morality is called a conscience and it is written in our hearts by God. I don’t have to quote the 10 commandments which they removed in the… Read more »

Yes, it is more than time people react and lead the way out of tyranny that is coming, all over the world. Global tyranny needs global resistance.

I say amen! Looks like we have lots of wannabe Nazis and communists at the state and local levels in the U.S. I don’t know why these folks won’t move to a communist country and rule and reign there. I forgot. Their goal is to keep their God-given and constitutional liberties while they take pleasure in denying you yours. I have to wonder if each new virus will result in this much overreaction from the ruling class. US State and local leaders have shown their true colors this year. Hopefully all of them will lose their re-election bids, and never… Read more »

Dr Judy Mikovitz, who worked under traitor Fauci, exposes many crimes against humanity that those in DC are guilty of, and says the virus is from FORT DETRICK, not Wuhan! She also says that the vaccine for Covid will KILL MILLIONS.