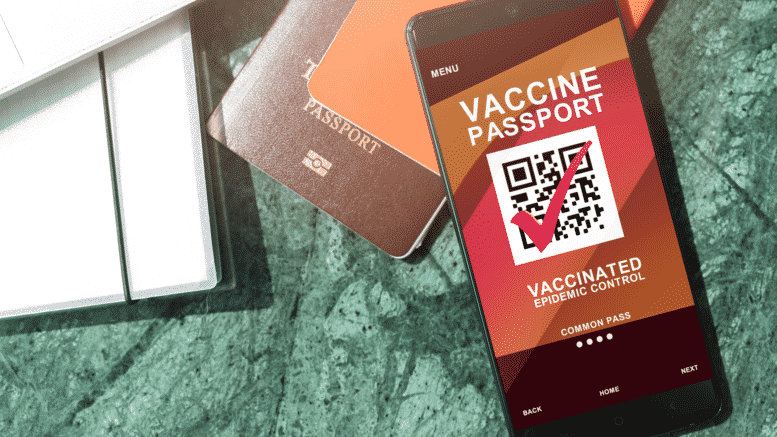 Please Share This Story!
PDF 📄
The singular Technocrat purpose of vaccine passports is to force holdouts to get vaccinated, ignoring and suppressing the fact that experimental gene therapy shots have already killed more recipients than all other vaccines since 2000, combined. ⁃ TN Editor

As the number of deaths continue to rise, this is now bordering on genocide. Experimental, untested and thus unapproved gene therapy shots have been delivered to 1.53 billion people, or roughly 20% of the world. The WHO quietly admits that it does not have an adequate global tracking and reporting system in place, so national figures must be extrapolated. In America, the CDC’s VAERS system has already recorded

Vaccine passports have been implemented, or are being developed, in a number of countries around the world. In February 2021, Israel introduced its “Green Pass,” which becomes “effective the week after receiving the second dose” of the vaccine and expires after six months. It was followed by China, which launched its digital “International Travel Health Certificate” in March. Subsequently, in April, Denmark implemented its “Coronapas” and Estonia introduced its “VaccineGuard.” Although the United States government recently dismissed the idea of a national vaccine passport, the state of New York has already launched its own “Excelsior Pass,” and several other states are developing similar programs, whereas South Dakota, Montana, Idaho, Utah, Florida, Texas and Arizona have banned the use of COVID-19 immunity passports within their borders.

Other countries have also announced their intentions to launch vaccine passports in the near future, including: the United Kingdom, which will be using an NHS (National Health Service) phone app as its COVID-19 vaccine passport starting on May 17th; and, the European Union, which is planning to “facilitate free movement inside the EU” with its “Digital Green Certificate” as of June.

In addition to prohibiting unvaccinated people from travelling (e.g., boarding airplanes, staying at hotels, etc.), these electronic documents are already being used to prevent them from attending social and cultural events at stadiums, theaters, and museums. Unvaccinated citizens are also not being permitted to enter a variety of other venues and businesses like gyms, dance clubs and studios, swimming pools, hair salons, wedding halls, tattoo parlours, restaurants, and coffee shops, among others. Essentially, the implementation of vaccine passports has led to a situation where governments protect the rights and freedoms of vaccinated citizens, while infringing upon those of their unvaccinated counterparts.

The ultimate goal of vaccine passports, which are based on the notion of “health paternalism,” is to coerce people into accepting injections of the experimental vaccines that have been incessantly promoted by politicians, mainstream news, and unelected medical experts for many months. However, those individuals that are not persuaded to submit themselves to unwanted medical procedures by sophisticated propaganda techniques will be forced to live a “life worse than death” through the suspension of their freedom, as well as the reasonable enjoyment of their lives within their private spheres. James M. Buchanan warned about coercive government measures that abolished liberty, as he argued that state regulations designed to protect individuals based on “scientific grounds” were “highly deceiving,” because the state is essentially using scientific authority to impose a single moral value on society.1

Similarly, Robert D. Tollison and Richard E. Wagner argued that allowing the state to impose regulations on the premise of protecting the health of its citizens presented “an open invitation to tomorrow’s arguments about the social cost of sugar, sunbathing, saturated fat, recreational injuries, obesity, and on and on. Down this road lies not a free society but a totally regulated society with only one acceptable lifestyle as prescribed by the health paternalists.”2 Milton Friedman was also opposed to “the health paternalists,” as he argued that if the government was given the responsibility to protect our health, “the logic surely calls” for protecting “us from using dangerous bicycles and cap guns, the logic calls for prohibiting still more dangerous activities such as hang-gliding, motorcycling, and skiing.”3 In his own opposition to “health paternalism,” Mises asked:

why limit the government’s benevolent providence to the protection of the individual’s body only? Is not the harm a man can inflict on his mind and soul even more disastrous than any bodily evils? Why not prevent him from reading bad books and seeing bad plays, from looking at bad paintings and statues and from hearing bad music?4

Vaccination passports support the idea that people can and should be coerced into making healthy choices, which would be condemned as “a form of health fascism” by Hayek, Buchanan, Friedman, Mises, and many other contributors to liberal theory across history. In fact, they would likely argue that vaccine passports eliminate freedom, because they allow an external authority to deliberately interfere in the lives of unvaccinated people in ways that prevent them from attaining their goals, and pursuing their personal interests. For instance, Hayek, Buchanan, Friedman, and Mises defined freedom as “the absence of coercion of a man by his fellow men.” With that in mind, they warned that the primary danger to freedom was any form of strong central power that intervenes in the private spheres of individuals and implements policies aimed at achieving a predetermined end based on expert scientific opinion.

Freedom from coercion, known as the negative concept of freedom (“freedom from”), was highly valued by Locke, Constant, Tocqueville, Hobbes, Bentham, Hayek, Mises, Friedman, and Buchanan, in addition to many other liberals. All of these prominent thinkers were preoccupied with answering one question: “How much am I to be governed?”5 In doing so, they were largely reacting against despotic and tyrannical rulers and governments. Proponents of the concept of negative freedom believed that ‘there should be always a frontier between public and private spheres, and that individuals should always be free to do as they please and live as they like when they are in their private spheres,’ where no one would be permitted to intervene.6 However, the implementation of vaccine passports would essentially mean that protected individual private spheres do not exist for governments and their so-called health experts. This is something that Hayek warned about when he argued that coercion would “be much more common” if there were no protected private spheres.7

Based on the concept of freedom advocated by Hayek, Buchanan, Friedman, and Mises, vaccine passports also violate economic freedom, which basically refers to the freedom to consume, produce, exchange, and cooperate spontaneously and voluntarily. They believed that “if one abolishes man’s freedom to determine his own consumption, one takes all freedoms away.”8 In other words, if coercive state actions violated or abolished economic freedom, then general freedom would essentially be taken away from individuals, including freedom of speech, freedom of expression, freedom of religion, freedom of assembly, freedom of the press, and intellectual freedom.

The concept of freedom defended by Hayek, Buchanan, Mises, and Friedman aimed to safeguard “the maximum degree of freedom for each individual separately that is compatible with one man’s freedom not interfering with other men’s freedom.”9 For them, a wider the area of non-interference and a broader the range of choices available to individuals corresponded to a greater degree of freedom. On countless occasions, these prominent liberals warned that in order to have freedom, the coercive power of any entity had to be limited, especially that of the government. They had faith that the legal system would be enough to avoid heading down “the road to serfdom” (road to unfreedom) by preventing state authorities from possessing unlimited powers that they could use to coerce as they please. However, since the onset of the pandemic, legal systems in country after country have failed to safeguard the private spheres of individuals from interference or coercion on the part of the state.

During this pandemic, much of the world has been subjected to the sudden and rapid implementation of poorly thought-out rules and policies, based on the incompetent and inexperienced central planning and design of the state. These decisions were often made by consulting only a handful of medical advisors who are not trained in areas like political science, economics, sociology, finance, history, demographics, psychology, philosophy, ethics, anthropology, and law, all of which offer important considerations for decisions that affect the whole society and the common good. In essence, politicians, in cooperation with their unelected health advisors, have managed to gain control over entire societies and reshape them in a failed effort to achieve the common good, while disregarding centuries of progress made by prominent liberal thinkers when it comes to protecting the rights and freedoms of individuals. Now, these same politicians are determined to impose vaccine passports, which will vastly expand oppressive state powers, while marginalizing unvaccinated people by suppressing their rights and freedoms, and robbing them of their ability to achieve happiness and self-development. Moreover, these oppressive governments and leaders that are pushing for vaccine passports will not forewarn those people who do not want to be injected with experimental substances about what awaits them:

You will think like me or die; he says: You are free not to think as I do; your life, your goods, everything remains with you; but from this day on you are a stranger among us. You will keep your privileges as a citizen, but they will become useless to you. If you aspire to be the choice of your fellow citizens, they will not choose you, and if you ask only for their esteem, they will still pretend to refuse it to you. You will remain among men, but you will lose your rights to humanity. When you approach your fellows, they will flee from you like an impure being. And those who believe in your innocence, even they will abandon you, for people would flee from them in turn. Go in peace; I spare your life, but I leave you a life worse than death.10