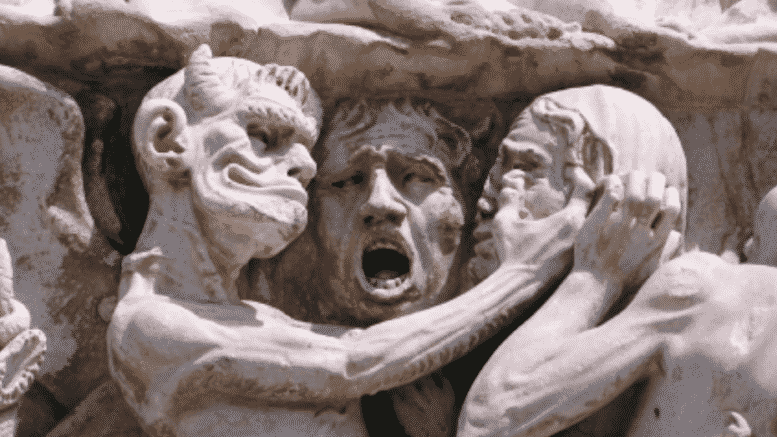 Please Share This Story!
PDF 📄
When the people who orchestrated the Great Panic of 2020 admit that they purposely used totalitarian fear tactics to manipulate their population into compliance with dystopian policies, then you are looking straight into the face of tyranny. ⁃ TN Editor

Scientists in the UK working as advisors for the government have expressed regret for using what they now admit to be “unethical” and “totalitarian” methods of instilling fear in the population in order to control behaviour during the pandemic, according to a report.

The London Telegraph reports the comments made by Members of the Scientific Pandemic Influenza Group on Behaviour (SPI-B), a sub-committee of the Scientific Advisory Group for Emergencies (Sage) the government’s chief scientific advisory group.

The report quotes a briefing from March 2020, as the first lockdown was decreed, that stated the government should drastically increase “the perceived level of personal threat” that the virus poses because “a substantial number of people still do not feel sufficiently personally threatened”.

One scientist with the SPI-B admits that “In March [2020] the Government was very worried about compliance and they thought people wouldn’t want to be locked down. There were discussions about fear being needed to encourage compliance, and decisions were made about how to ramp up the fear.”

The unnamed scientist adds that “The way we have used fear is dystopian.”

The scientist further confessed that “The use of fear has definitely been ethically questionable. It’s been like a weird experiment. Ultimately, it backfired because people became too scared.”

Another separate scientist on the subcommittee professed “You could call psychology ‘mind control’. That’s what we do… clearly we try and go about it in a positive way, but it has been used nefariously in the past.”

Another scientist warned that “We have to be very careful about the authoritarianism that is creeping in,” adding “people use the pandemic to grab power and drive through things that wouldn’t happen otherwise.”

According to the report, another researcher with the group acknowledged that “Without a vaccine, psychology is your main weapon,” adding that “Psychology has had a really good epidemic, actually.”

Yet another scientist on the subcommittee stated that they have been “stunned by the weaponisation of behavioural psychology” over the past year, and warned that “psychologists didn’t seem to notice when it stopped being altruistic and became manipulative.”

“They have too much power and it intoxicates them”, the scientist further warned.

The comments were collected by author Laura Dodsworth, for her book A State of Fear, out today, that explores the government’s actions during the pandemic.

When the Telegraph asked the subcommittee for comment on the findings, SPI-B psychologist Gavin Morgan replied “Clearly, using fear as a means of control is not ethical. Using fear smacks of totalitarianism. It’s not an ethical stance for any modern government.”

Morgan added that “By nature I am an optimistic person, but all this has given me a more pessimistic view of people.”

Commenting on the revelations, Conservative Steve Baker, a member of a group of anti-lockdown MPs said “If it is true that the state took the decision to terrify the public to get compliance with rules, that raises extremely serious questions about the type of society we want to become.”

“Do I fear that Government policy today is playing into the roots of totalitarianism? Yes, of course it is,” Baker urged.

Well, they must apologize to avoid present moral/legal repercussions. And they will be allowed to remain where they are. On some tomorrow they will do the same thing. Especially after they have spent the interim convincing the public via media that sometimes trickery and deceit are needed to save the world.

Agreed. I believe you. Honesty is not the best policy with these people.

Yes . It is mind control. However, the way many Americans bought into it hook line and sinker makes one wonder if those many had any minds in the first place.

Quote from article:
‘Commenting on the revelations, Conservative Steve Baker, a member of a group of anti-lockdown MPs said “If it is true that the state took the decision to terrify the public to get compliance with rules, that raises extremely serious questions about the type of society we want to become.”’

Steve Baker is wrong about ‘want to become’, it should read ‘have become’.

Is there nothing these human turds won’t do for ‘Them’ and a handsome pay check? One of the morally defunct named Morgan states “….but all of this has given me a more pessimistic view of people.” Take a good look in the mirror Mr. Morgan as to your new found pessimism with certain people. This seemed to escape the dear Mr Morgan that he himself has some serious responsibilities on this issue. A lengthy prison term might atone for your cruelties and give you enough time to look within and decide what you are as a human being…or not. He… Read more »

[…] Watson, Summit News | Technocracy.NewsWhen the people who orchestrated the Great Panic of 2020 admit that they purposely used totalitarian […]

What? This is some kind of admission as in ‘forgiveness not permission’? What a crock. These so-called professionals/scientists and their buddies deserve incarceration in a dark hole somewhere where the world no longer has to deal with their kind ever again.

I have been trying to convince people that we all need to learn as much truth about health (good and bad) as we possibly can learn for ourselves. There are various health summits held online throughout the year. I have recently purchase some online health docu-classes covering several health issues. Feel free to sign up at healthmeans.com to be notified of upcoming health summits. I have decided to become my own primary care physician since you can’t trust everyone to look out for your best interests. Learning as much as possible from trusted sources about prevention, treatments and possible cures… Read more »