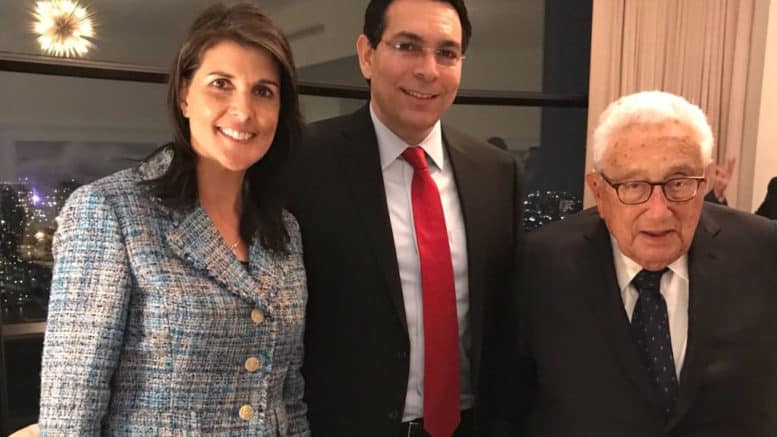 According to Harper’s Magazine, UN Ambassador Nikki Haley recently delivered a speech to the elite and secretive Council for National Policy (CNP).  On October 4, Haley had previously resigned her UN assignment as of the end of 2018.

Harper’s Magazine reported on the CNP speech as more or less recapping her 19 months of service in the Trump Administration. The article first states,

In a way, Haley had deployed a version of Henry Kissinger and Richard Nixon’s “madman theory,” holding up Trump as an unstable actor who might do anything. It seemed that she herself also genuinely had no idea what Trump would do. [emphasis added]

This suggests that President Trump was used as a prop to her UN agenda. But, who were the puppeteers? The article explains from her own words:

While learning on the job at the UN, Haley said, she sought out Henry Kissinger as her personal foreign policy mentor, meeting with him every two months to absorb his lessons. During a tense diplomatic standoff with North Korea, she appeared to have embraced a version of Kissinger and Nixon’s notorious “madman theory.” [emphasis added]

Henry Kissinger, of course, was one of the founding members of the elite Trilateral Commission. President Trump considers Kissinger a long-time personal friend, and has received him at the Whitehouse on multiple occasions.

The fact that both Trump and Nikki Haley are taking foreign policy queues from Kissinger is highly disturbing because it suggests that reality and perception of the Trump Administration are far apart.