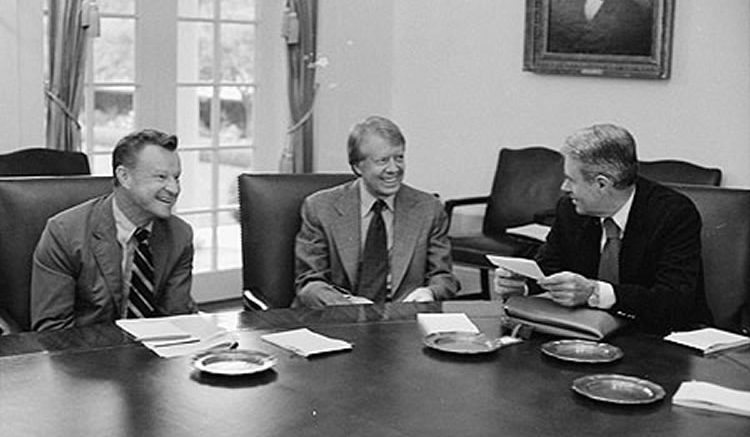 For some reason, a few recent articles have surfaced that resurrect a 1973 report of the Trilateral Commission titled, The Crisis Of Democracy.

Antony Sutton and I co-authored Trilaterals Over Washington, Volume I in 1979, fully exposing the plans of this elite group that was formed in 1973 by David Rockefeller and Zbigniew Brzezinski.

The Crisis of Democracy, by Trilaterals Michel Crozier (Europe), Samuel Huntington (US) and Joni Watanuki (Japan), was one of the very first authoritative reports issued by the Trilateral Commission. If you have a mind and the time to read this 168 page tome, it can be seen here.

Suffice it to say that Sutton and I did read every word in 1977 and referenced it several times in our subsequent books. Here are two excerpts.

With reference to the Trilateral takeover of the Carter Administration:

The significance of this lock on the legislative process is brought into focus when we examine the political ideology of Trilateralism as expressed by Crozier, Huntington, and Watanuki in The Crisis of Democracy.

– The democratic political system no longer has any purpose

– The concepts of equality and individualism give problems to authority

– The media is not sufficiently subservient to the elite

– Democracy has to be ‘balanced’ (i.e., restricted)

– The authority and power of the central government must be increased.

Weighing these totalitarian ideas which form the political philosophy of the Commission against congressional membership… (p. 22)

On the appointment of eighteen Trilaterals to the Carter cabinet and Administration:

The Crisis in Democracy is devoted to the theme that the American system needs to be discarded and totalitarianism central authority substituted. Why was there no public outcry? Simply because media reporting was superficial and stifled.

While the majority people today are wringing their hands over activities of the left or right (take your pick, depending on your orientation), virtually none of these realize that this was thoroughly exposed almost forty years ago!

Although Sutton and I sold over 75,000 volumes of Trilaterals Over Washington, spoke and lectured extensively and appeared on hundreds of radio programs, America did not listen, much less act on it. Nevertheless, because America was duly warned in time to take action, its destruction is now on its own head.

This applies to both the political left and right: you have both been suckered into thinking you must fight the “other” side. This has always been a false narrative and the Trilateral Commission has taken full advantage of it, having escaped any responsibility for bringing American to its knees.

If I were not an American, it would be tempting to say, “Good riddance”. But alas, I cannot: my own children and grandchildren are at stake. The clear and present danger  today (Technocracy, brought to us by members of the Commission) is far greater than the 1970s, and the window of opportunity is virtually closed. In the meantime, we must NOT succumb to apathy, fatalism or suppression, but rather we must sternly warn everyone who has an ear to listen.

If you have not read my book Technocracy Rising: The Trojan Horse of Global Transformation, I implore you to do so immediately. It is also available on Amazon.

i am amazed and yet not surprised, the people will win. sucks to have to fight this fight but what the hey.