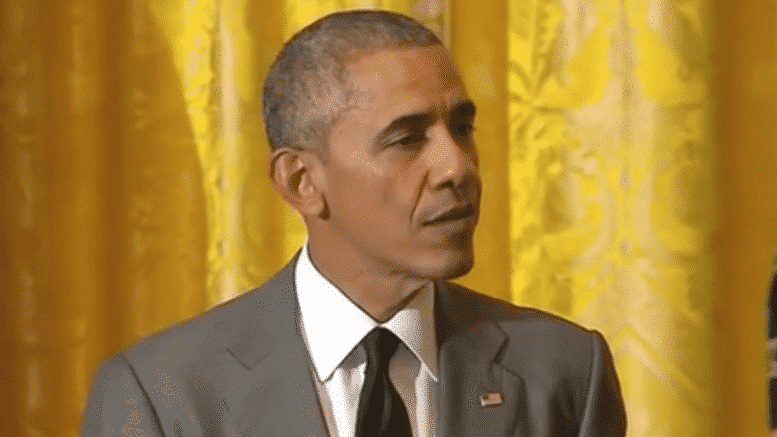 On July 15, President Obama addressed the Diplomatic Corps reception in Washington, D.C. Many Ambassadors to the United States attended.

Obama simply reflects his globalist handlers when he suggests that the solution to the world’s problems will be found in everyone’s submission to a single globalist power.

He believes that we should “build strong institutions to protect people from those impulses” of nationalism and cultural pride. In other words, all Americans should stop being so selfish and self-centered and surrender themselves to the global “common good”.

Furthermore, he says that “hatred and violence of a few ultimately is no match for the love and decency and hard work of people of goodwill and compassion.“

What happened to the War on Terror? In a war, the object is to crush the enemy into total defeat. In Obama’s war, we are supposed to crush them with love, decency, goodwill and compassion.

Actually, he says this again in the same speech: “We will defeat these ideologies by offering a better vision of development and economic progress.”

This is purportedly the same goal of the 2030 Agenda promoted by the United Nations, where the new Sustainable Development Goals (SDGs) are the answer to all of mankind’s problems. In the same context, Obama referred to “a new sustainable development set of goals to end extreme poverty and promote health and education and equality for all people, including women.”

The Technocrats behind Obama may well be invisible to the general public, but they are there. For the sake of implementing Technocracy, Obama is merely one of their many “useful idiots” who spew propaganda about things they know little about.

The full text of his remarks appear below.

Remarks by the President at Diplomatic Corps Reception

THE PRESIDENT:  Good afternoon, everyone.  I just had the opportunity to greet each of you in person.  And we welcome all of you.  Each year, the diplomatic corps comes so that we can say thank you for the partnership between our nations and our peoples, and reaffirm our shared commitment to promoting security and peace and human dignity around the world.

Obviously, we come here with heavier hearts than normal.  Overnight in Nice, we witnessed another tragic and appalling attack on the freedom and the peace that we cherish.

Today, our hearts are with the people of France and with all the innocent men, women and so many children who were hurt or killed in this sickening attack.  This includes Americans that we know of — a family from Texas, a father and young son, just 11 years old, who were there on vacation.  Their family, like so many others, are devastated.  They’re grieving.  They need all the love and support of our American family as they grapple with an unimaginable loss, and try to get through what are going to be very difficult days.

And so on behalf of all of us, I think, I want to welcome our friend, Ambassador Araud of France.  And I had a chance to meet with him right before I came out so that he knew that it’s not just the United States of America, but the entire world that stands in solidarity with the people of France during this difficult time.

I spoke with President Hollande earlier today.  And in addition to conveying deep condolences, I reminded him that France is America’s oldest ally and one of our strongest.  We owe our freedom to each other.  Americans and French have stood together for two centuries.  And I told President Hollande that we will stand united now — in our grief; in our praying for the many who are injured, many of whom are fighting for their lives.  And we pledge to stand with our French friends as we defend our nations against this scourge of terrorism and violence.

And this is a threat to all of us.  We don’t know all the details, but what we know is the capacity of even a single individual to do extraordinary harm to our people, to our way of life.  A lot of nations represented here today have been impacted this year and in previous years.  In recent weeks, we’ve seen heinous attacks, inspired or directed by ISIL, here in the United States, in Turkey, in Iraq, in Bangladesh, in Saudi Arabia.  And these terrorists are targeting and killing innocent people of all backgrounds and all faiths, including Muslims.  And I know I speak for all of us when I say that these individuals and these networks are an affront to all of our humanity.

And in contrast to these terrorists who only know how to kill and destroy, we’re going to win this fight by building; by never giving up on diplomacy to end the Syrian civil war; by working with partners around the world, including Muslim communities, to push back against hateful ideologies that twist and distort Islam — a religion that teaches peace and justice and compassion.  We will defeat these ideologies by offering a better vision of development and economic progress, so people, especially young people, have more hope and opportunity and are less susceptible to extremism and violence in the first place.  And we will continue to promote political opportunity and democracy so citizens have a say in their future.

And we will win this fight by staying true to our values — values of pluralism and rule of law and diversity and freedoms, like the freedom of religion, freedom of speech and assembly — the very freedoms that the people of Nice were celebrating last night on Bastille Day.  In the wake of last night’s attacks, we’ve heard more suggestions that all Muslims in America be targeted, tested for their beliefs; some deported or jailed.  And the very suggestion is repugnant and an affront to everything that we stand for as Americans.

We cannot give in to fear, or turn on each other, or sacrifice our way of life.  We cannot let ourselves be divided by religion — because that’s exactly what the terrorists want.  We should never do their work for them.  And here in the United States, our freedoms — including freedom of religion — help keep us strong and safe, and we have to be vigilant and defend our security and our freedoms.

And all of us — whatever nations we represent here — I think have to step back and reflect on what we are doing to eliminate this kind of chronic violence.  It’s been a difficult several weeks in the United States.  But the divide that exists is not between races and ethnicities and religions; it is between people who recognize the common humanity of all people and are willing to build institutions that promote that common humanity, and those who do not — those who would suggest that somebody is less than them because of their tribe, or their ethnicity, or their faith, or their color.  And those impulses exist in all our countries.  And those impulses, when we do not speak out against them and build strong institutions to protect people from those impulses, they can take over, they can be unleashed — so that all of us have responsibilities, not just a few.

I want to say that even as we are relentless against terrorists, it’s also worthy for us to recognize that our nations have worked together for security and peace and human dignity around the world.  I want to thank so many of your countries for the partnership that we’ve forged and the progress we’ve achieved together over these past eight years in rescuing the global economy and securing vulnerable nuclear materials.  A comprehensive deal to prevent Iran from obtaining a nuclear weapon.  Halting the spread of Ebola, and thereby saving countless lives.  In Paris, the most ambitious agreement in history to fight climate change.  A new sustainable development set of goals to end extreme poverty and promote health and education and equality for all people, including women.

And through the efforts of many of you, we’ve continued to try to move beyond old conflicts:  Supporting the transition to democracy in Burma.  Forging a new partnership with Vietnam.  Deepening our new chapter of engagement with the Cuban people.  Helping to support the efforts in Colombia to end the decades-long conflict.  That’s the power of diplomacy.  That’s what’s possible when our nations and our peoples work together in a spirit of mutual interest and mutual respect.

And what a contrast to the death and nihilism that terrorists offer.  What a powerful reminder of the progress and opportunity and hope that we can advance when, as nations and as peoples and as individuals, we refuse to be defined by our differences alone, and we remember that we are all part of one human race.  Even on difficult days like this, that’s what gives me hope.  And that’s what should give us all hope.  Because on this planet of more than seven billion people, the hatred and violence of a few ultimately is no match for the love and decency and hard work of people of goodwill and compassion, so long as we stand up for those values and so long as we answer those who would undermine those values.

I’m very proud of the work that we’ve done over these last seven and a half years in partnership with your countries.  And so long as I have the privilege of being the President of the United States, I will continue to stand alongside you to promote those values all across the world.

Thank you very much, everybody.

Obama is so damned clueless that he appears to not have a clue that he is clueless…..And those who voted for him have even less contact with anything that is real. True believers are truly scary people.

I do not know the exact figure and it may not include all of the legitimate governments that the USA has either destabilized or attempted to control but I think at least 50 to 60 violence actions across the world have been at the hands of the USA.

So here is my question:
Will sustainable development end the chronic violence of “Imperial Amerika”?

War is peace we can believe in.

No, it will not. Nor will it stop war in general.

Having skimmed Obama’s words, I agree – sustainable development, compassion, sharing for the greater good is all great and can truly help heal the world. The critical difference? It has to be achieved through locally and voluntarily means, not via force and the global consolidation of power to “Elites”. Using techniques like Permaculture, Open Source Hardware (see Marcin Jakubowski’s TED talk), alternative housing like Mike Renold’s Earthships, voluntary trade/sharing/cooperation and charity among friends and neighbors, true local militias, and a mutually-respectful liberty-oriented coevolution of local cultures that fit the people who comprise and create them, we humans can, over time,… Read more »