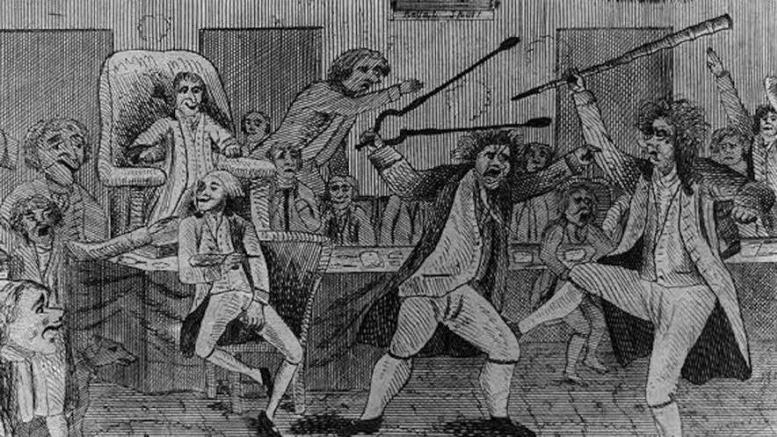 As their own actions demonstrate, social media companies are coming together to essentially overthrow the government of the United States. While it’s difficult to prove back-room collusion, it is not difficult to see these companies forming a like-minded mob that moves in unison toward some common objective.

In this case, the objective is to destroy a presidency, a person and a system of government that has served America for over 200 years.

Attacks are coming from all directions, large and small. Twitter, Google, YouTube and Facebook’s antics of censorship are well known. Now, lesser- known platforms are joining in, like Yelp, WordPress.com and Neighborside.

Censoring the speech and thoughts of citizens is a direct attack on the First Amendment in specific and the U.S. Constitution in general. This is designed to overthrow the Constitution.

The government, along with its elected officials, has the explicit and necessary right to communicate with the American people. Any private organization that interferes with this right to diminish, discredit or prevent unfettered communication is making a direct attack on the ability of the government to function properly.

It has also become clear that Big Social Media’s censorship is very selective. While censorship of government officials is being executed, there is no censorship of violent forces who are dedicated to the violent overthrow of the government.

Lastly, the personal attacks seen against a duly-elected President are serving only to overthrow him. Some such attacks are obvious and some are very subtle. For instance,  if you type the word”racist” into Twitter’s search bar, the first entry that comes up is “Donald J. Trump.” 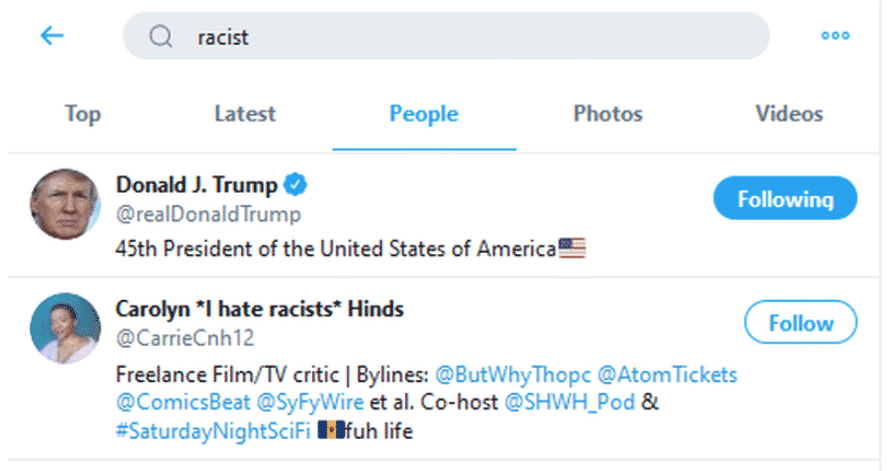 Sedition by any other name…

There is a fine line between free speech and sedition. According to Encyclopaedia Britannica:

Sedition may have the same ultimate effect as treason, it is generally limited to the offense of organizing or encouraging opposition to government in a manner (such as in speech or writing) that falls short of the more dangerous offenses constituting treason.

The publication of seditious writing (“seditious libel”) or the utterance of seditious speech (“seditious words”) was made a crime in English common law. Modern statutes have been more specific. The display of a certain flag or the advocacy of a particular movement such as criminal syndicalism or anarchy have been declared from time to time to be seditious.

To be more specific, however, one must look at the specific U.S. Code to get the details.

Whoever, owing allegiance to the United States and having knowledge of the commission of any treason against them, conceals and does not, as soon as may be, disclose and make known the same to the President or to some judge of the United States, or to the governor or to some judge or justice of a particular State, is guilty of misprision of treason and shall be fined under this title or imprisoned not more than seven years, or both.

Whoever incites, sets on foot, assists, or engages in any rebellion or insurrection against the authority of the United States or the laws thereof, or gives aid or comfort thereto, shall be fined under this title or imprisoned not more than ten years, or both; and shall be incapable of holding any office under the United States.

Whoever, with intent to cause the overthrow or destruction of any such government, prints, publishes, edits, issues, circulates, sells, distributes, or publicly displays any written or printed matter advocating, advising, or teaching the duty, necessity, desirability, or propriety of overthrowing or destroying any government in the United States by force or violence, or attempts to do so; or

Shall be fined under this title or imprisoned not more than twenty years, or both, and shall be ineligible for employment by the United States or any department or agency thereof, for the five years next following his conviction.

If two or more persons conspire to commit any offense named in this section, each shall be fined under this title or imprisoned not more than twenty years, or both, and shall be ineligible for employment by the United States or any department or agency thereof, for the five years next following his conviction.

Both of these statements make a point, but the line into Sedition is crossed when intentions become known. In this case, as noted above, social media is acting in concert to:

Technocracy by any other name…

I have communicated frequently in speech and writing that Technocracy is executing its coup d’etat to dominate the entire planet. America is the last nation on earth whose people naturally reject the Technocrat ideology. Social media companies are run mostly by Technocrats who only understand that the current status quo in America must be permanently destroyed. As such, the social media industry has risen to become the number one opponent of America and the American way of life.

(Note: As TN editor, I will be carefully timing how long before all social media bans, blocks or deletes this article. You are well-advised to make a printed copy asap.)

How You Can Beat Government And Hacker Surveillance

Hmmm. Actually social media is simply an agent of those who control government. The illusion it favors one party over the other is simply kayfabe. Its part of the script. Both parties are controlled by the globalists. Trump is a controlled agent of the globalists. He is their Trojan Horse IMO. He knows his fake wrestling and is a master of kayfabe

Agreed. To many things Trump has not done and should have by now. This is a clue. Remember the older pictures of the Bushes, Clinton, Obama, Carter, smiling for the camera opts. together. Hmm really! All of them have had a special assignment to do over the years. Both parties are controlled. So what happens in Nov. is really just a vote for the NWO.

Patrick, get a link to Parlor. This is where the Twitter banished are going. There isn’t any censorship, so far.

Over At Saker’s – vineyard of the Saker – he anticipated getting censored so he set up his website in Iceland where the laws are very much properly set up – maybe you should look into Iceland as your server – so instead of it saying patrick wood.com – or patrick wood.ca it would say patrick wood.is – http://thesaker.is/ – also they don’t spy so much I think.

We all have been wrongly mischaracterized as US Citizens or Citizens of the United States since you signed up for a social security card and got into their system. Before turning 21 you were lawfully called an American State National. You all need to correct your political status back to an American National because you do not have any constitutional rights at this time. You only have civil rights and subject to all the statutory laws of this corporate for profit defacto government passing itself off as our legitimate American government when it’s in fact being run by foreign owned… Read more »