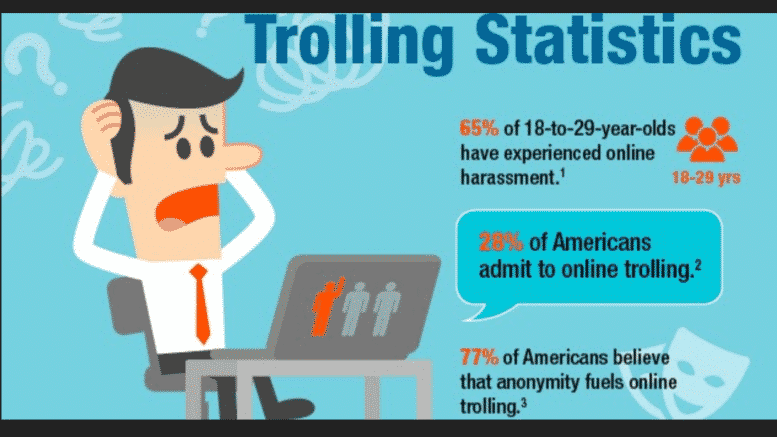 Please Share This Story!
PDF 📄
Trolls are a scourge to the Internet, vitriolically harassing people for only for the sake of seeing how much pain and suffering they can inflict. The collective troll culture is the largest source of pure hate speech and Big Tech social media giants could easily stop such trolls but do not. ⁃ TN Editor

As we enter the final hours of sport’s four-day online boycott, in protest at the social media giants’ pernicious failure to tackle hate, let’s try imagining an alternative reality. Just as now, it starts with trolls sending racist abuse at, say, Mohamed Salah or Marcus Rashford, or relentlessly attacking a female sports star or commentator. Only, in this parallel universe, a crack team of investigators spring into action.

What might happen next? First the investigators would find out the culprits’ names, telephone numbers, and where they lived. Then the authorities would be alerted. Shortly afterwards, accounts would be closed down. And, in the worst cases, the police would prosecute. Finally, as people began to realise that actions online had actual consequences, many would start modifying their behaviour. The tsunami of online hate might eventually become a sea swell.

A flight of fancy? Perhaps. But it is not as ridiculous as it sounds. Last May investigators at Sportradar, who spend most of their time identifying match-fixing, conducted a pilot scheme at two exhibition tennis tournaments where they tracked down trolls.

Those targeted included Taylor Townsend, who was abused by six trolls because of her skin colour, and a male tennis star who was threatened with physical violence against himself and his girlfriend. In total 44 people sent abusive messages to players during those weeks. Sportradar tracked down 21 of them.

They then alerted the appropriate authorities and helped them pursue an appropriate course of action – from kicking the trolls off social media platforms to working with law enforcement to bring legal proceedings. Of course the response was different depending on the severity of the threat and location. But it helped the victims feel as if someone was watching their backs.

Since then, the company has piloted similar schemes in two other sports, with Andreas Krannich, the managing director of Sportradar’s integrity services, telling me they have had about a 50% success rate. “It makes little difference whether you are looking for match-fixing or someone who is abusing players on social media,” he says. “At the end of the day it’s an investigation. And my guys come from the world of police, law enforcement and financial fraud, and, in particular, military defence and counter-terrorism. So they know how to find people.”

Such an approach is clearly the gold standard. But there are also simpler steps that social media companies could take. Look at Twitter. It insists: “Racist behaviour has no place on our service and when we identify accounts that violate any of the Twitter rules, we take enforcement action,” and yet its interpretation of what counts as racism is puzzling.

“Take the following racist tweets,” writes Sunder Katwala in this week’s New Statesman. “‘No blacks in the England team – keep our team white’ and ‘Marcus Rashford isn’t English – blacks can’t be English.’ I asked Twitter to confirm whether this racism is allowed on the platform. They confirmed that these kinds of racist tweets are not against the current rules.” Despite all this, Katwala says, Twitter’s rules are still stronger than Facebook’s.

Katwala himself says he receives far more racist abuse than he did 20 years ago, “despite fewer people holding racist attitudes”. Changes in technology have allowed racists to disseminate their poison far more easily – and directly. And while football has led the boycott, it also needs to take a good hard look at itself. A recent YouGov poll for Kick It Out, which surveyed more than 1,000 fans, found 30% of them had witnessed or heard racist comments or chants at a match in 2019. That is a shocking, shameful, figure.

Amen to that! I see trolls everywhere, especially on conservative and Christian media. Christian pretenders on Christian websites get by because they don’t use filthy language but they argue with anyone about anything, they lead people to debased links, (lots of New Agey stuff) and it is obvious who they are, they are best ignored. “Now the works of the flesh are manifest, which are these; Adultery, fornication, uncleanness, lasciviousness, Idolatry, witchcraft, hatred, variance; emulations, wrath, strife, seditions, heresies, Envyings, murders, drunkenness, revellings, and such like: of the which I tell you before, as I have also told you in… Read more »