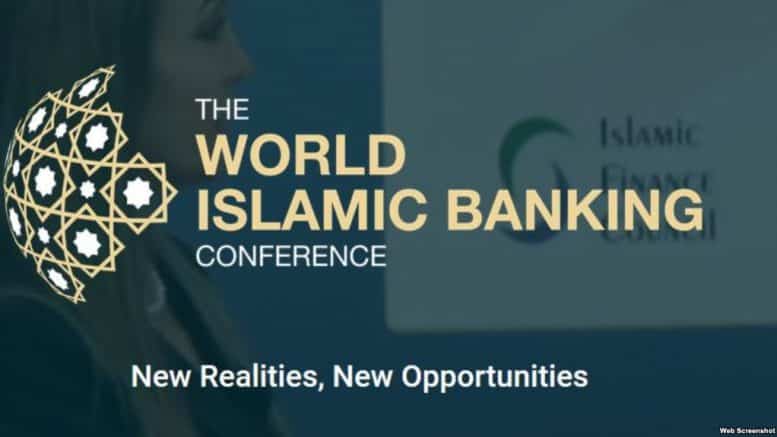 The Bible warns that “the love of money is the root of all sorts of evil” (1 Ti. 6:10). So, just when you think you have just about seen it all, something even more shocking turns up. Like this.

Either global bankers are seducing Islamic dictators, or vice versa. Even if they are seducing each other at the same time, the result will be the same: Islamic/Shari’a banking is coming to the United States and other western nations, thanks to global banks such as Citigroup, HSBC, Deutsche Bank, Morgan Stanley and Goldman Sachs.

Western banking met Islam many decades ago, but only began to sleep with her a few years ago. Since then, it is has become a wanton and open affair.

The implications for the west, and especially for the United States, are staggering. Because all Islamic banking products must be created and offered according to strict Shari’a law, global banks are doing for Islam what it could never do on its own: give legitimacy to Shari’a and infiltrate it into the fabric of western society.

What is Islamic banking?

Simply put, Islamic banking and finance creates, sells and services products that are in strict accordance with Shari’a. In the Islamic culture, it is referred to as “Shari’a finance” and covers the practices of banking, investment, bonds, loans, brokerage, etc.

To insure Shari’a compliance, banks must hire Shari’a scholars to review and approve each product and practice as “halal”, the Muslim equivalent of kosher in Judaism. Because there is a shortage of such scholars, there is competition between banks to find the best expert to sit on their boards of directors. This provides the highest legitimacy to each ruling because it is made at the director rather management level.

It should be noted that most of these scholars are from the school of radical Wahhabi/Salafi Shari’a in Saudi Arabia and elsewhere, holding views diametrically opposed to the basic values of Western civilization.

Shari’a finance has many differences from orthodox banking: Notably, it cannot charge interest (usury) and it calls for alms giving (zakat). It also calls for avoidance of excessive risk and may not be associated in any way with gambling, drinking alcohol, eating pork, etc.

Zakat demands a tithe of 2.5 percent of revenue be donated to Islamic charity. If western banks follow this rule, their contributions will be staggering. It is certain that a portion of this money will end up in the hands of radical Muslims who are sworn to destroy the U.S. and replace its government with Shari’a law.

Shari’a finance is a recent phenomenon. There were very few Islamic banks prior to 1980. However, with the Khomeini revolution in Iran in 1979, Shari’a was summarily imposed throughout Iran and Shari’a finance took off.

The dark side of Shari’a

Shari’a is the legal and judicial system of Islam that is brutally imposed on many Islamic countries in the middle east. It is the specific embodiment of the totalitarian ideology practiced by the Taliban, Iranian Mullahs and Saudi Wahhabis.

Shari’a is perpetuated by claiming to have its roots in the Koran, but in fact it is mostly the product of rulings and dictates made by Islamic scholars and caliphs over several centuries.

For non-Muslims, Shari’a is best known for its medieval, harsh brutality. Many rulings handed down by Shari’a courts have shocked the western world, for instance:

Shari’a demands total and unquestioned submission. Its subjects are told that Shari’a is given by Allah and that whatever befalls them (good or bad) is Allah’s will. To question a judgment under Shari’a (right or wrong) is to question Shari’a itself and will only bring harsher punishment. If a person receives harsh punishment for something they didn’t do, the rationale is that Allah could and would have prevented it if that had been his will. This fatalistic and deterministic approach allows Shari’a rulers to get away with virtually any thing that enters their head.

To the average western mind, Shari’a is no more than a medieval, barbaric code that somehow survived to the 21st century. It flies in the face of western law, philosophy, liberty and freedom. Furthermore, it is the vehicle used to call for the complete destruction of the west and in particular the United States of America, which then will be replaced by Shari’a dictatorships.

How the banking rocket took off

At the behest of global trade moguls, numerous Free Trade Zones (FTZ) were created throughout the Islamic world that were full of windfall conditions.

For instance, the Dubai International Financial Centre (DIFC), is a 110 acre free trade zone that was founded in 2004 in Dubai, UAE. According to the DIFC website, participants will enjoy “zero tax rate on income and profits, 100 per cent foreign ownership, no restrictions on foreign exchange or capital/profit repatriation, operational support and business continuity facilities.”

Not surprisingly, Morgan Stanley’s application was one of the first approved by the Dubai Financial Services Authority to operate within the DIFC.

This is a testimony to our status as an international financial centre of repute. Morgan Stanley is a highly reputed organisation and to have them here at the DIFC is a vindication of our strategy to create a world-class financial hub for the region. The opportunity available within the region, along with the state-of-the-art infrastructure and the international regulatory framework of the DIFC, provides the ideal platform for institutions such as Morgan Stanley to grow their business.” [Emphasis added]

DIFC and similar Free Trade Zones are a banker’s nirvana into which global bankers have rushed headlong to establish regional financial centers.

And the payoff? A chance to enter and then dominate the Islamic banking industry. Such banking has over $1.5 trillion on the table today, and is growing at a steady and explosive rate of over 15% per year.

Understanding that Islamic banking is a very recent phenomenon is underscored by the fact that its largest and most prestigious international conference, World Islamic Banking Conference (WIBC) has met for a mere 14 years. The most recent meeting just concluded in Bahrain and attracted over 1,000 banking delegates from 35 countries.

Who is Mullins? He is in the white-hot core of international banking. Mullins was Vice Chairman and Governor of the Board of Governors of the Federal Reserve System under Greenspan during George H.W. Bushï¿½s presidency. As governor, he represented the Fed at meetings of the G-10 Governors, the International Monetary Fund, the Organization for Economic Cooperation and Development, and the Bank for International Settlements. Prior to that, he was the Assistant Secretary for Domestic Finance at the U.S. Department of the Treasury.

The next topic at the Governor’s Table was “Industry in Transition: Trends & Innovations for Islamic Financial Institutions in an Increasingly Competitive Global Market,” where several speakers included Dr. Samuel L. Hayes III, Jacob Schiff Professor of Investment Banking Emeritus at Harvard Business School. According to Hayes,

The growing acceptance among Muslims of Halal savings and investment products over the past decade has been impressive. Consequently, a number of conventional Western financial institutions have eagerly moved into this market as the array of investment vehicles has broadened.

The closed-door CEO Strategy Session was centered around the McKinsey Competitiveness Report, developed in conjunction with the WIBC by the very elite McKinsey & Company based in New York.

In fact, McKinsey & Company was listed as a Strategic Partner of the WIBC, alongside of global accounting firm Ernst & Young and the consummate global investment banker, Goldman Sachs. (Remember that in 2005, Secretary of the Treasury Henry Paulson was CEO and Chairman of Goldman Sachs.)

Another key speaker was Dr. Robert Kaplan, Baker Foundation Professor at the Harvard Business School and acclaimed author of many management books like Balanced Scorecard and Strategy Maps. In a pre-conference press release, Kaplan stated

I look forward to presenting to Islamic banking leaders the latest ideas on strategy execution that delivers performance breakthroughs. I will present how successful organizations have built strategy maps around a common value proposition, communicated to and motivated the workforce, and installed a new Office of Strategy Management to sustain strategy execution.

More recently, on December 6, 2007, the general manager of the Bank for International Settlements, Malcolm Knight, addressed the Islamic Financial Services Board Forum in Frankfurt, Germany:

The west is giving away the know-how, with gusto, to enable Shari’a banking and guarantee its success throughout the world. And to what ends?

For one, Britain’s PM Gordon Brown has pointedly stated that he intends to make London the Islamic finance capital of the world. Further, he pledged that in 2008 the British government will issue its own “sukuk”, or Shari’a compliant bonds. Yes, government debt issued as Shari’a compliant.

Brown’s statements can only be taken as a challenge by the New York banking establishment to beat him to the finish line. It doesn’t matter who wins this race because the result will be the same: Shari’a banking is quickly encircling the globe and forcing a de facto acceptance of Shari’a law.

International bankers have long ago proven themselves to be completely amoral when it comes to money. They bankrolled the Bolshevik Revolution in 1918 just as blithely as they bankrolled Hitler in the 1930s. Fortunately for us, neither succeeded in conquering the world.

With Islam, odds of its succeeding are radically different. To start with, there are already 1.6 billion Muslims in the world, and it is the fastest growing religion in history. Secondly, the spread of Islam is richly financed by the oil that is extracted from mid-eastern countries. Thirdly, Islam has already infiltrated most of the west, especially in Europe.

And now, Islam has behind it the combined support and encouragement of the entire global banking community.

The unholy alliance between Islam and global banking may be the final leg on the age-old quest for global domination. Don’t be surprised at the silence of the global elite the next time you hear Islamist mobs chant “Death to America” their goals are now intertwined.

Since dark Luciferian scientism rejects traditional sources of the truth (orthodox religions, philosophy and logic), the world scientific dictatorship may well kill the Islamic donkey when it’s off the millstone of expansion and repression, to use the Chinese idiom xièmòshālǘ (卸磨殺驢), meaning to get rid of someone, or something, or both, once they have ceased being useful.