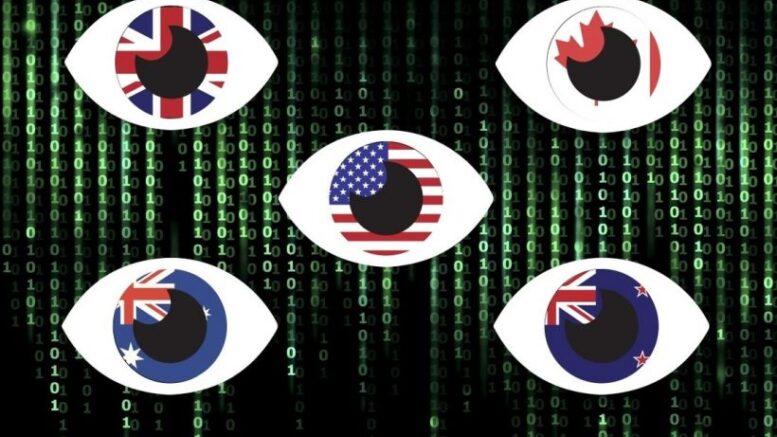 Technocrats in Big Tech have opened up governments like so many cans of sardines in order to aggregate virtually all data that exists in the world, including yours. Individual threats are just excuses to grab more data. This is the end result of Technocracy’s “Science of Social Engineering.” ⁃ TN Editor
For years, Americans have largely ignored corporate social media surveillance. But all of that is about to change, thanks to President Biden.
No one has taken the White House’s plan to turn Big Tech into a quasi-Five Eyes censorship program seriously despite repeated warnings from journalists and news websites.

Journalist Caitlin Johnstone warned, the White House is pushing for Facebook and Microsoft to censor any social media stories the Feds don’t like.

“After Press Secretary Jen Psaki admitted on Thursday that the administration has given Facebook a list of accounts to ban for spreading misinformation about the Covid vaccine, she has now doubled down saying that people who circulate such materials online should be banned from not just one but all social media platforms.”

The Feds want Big Tech to ban stories and people they do not approve of from social media.

“You shouldn’t be banned from one platform and not others for providing misinformation out there,” Psaki told the press on Friday.

Reuters revealed some of America’s biggest tech companies will let “Five Eyes” and the U.N. decide whose stories the “Global Internet Forum to Counter Terrorism” should censor.

“Until now, the Global Internet Forum to Counter Terrorism’s (GIFCT) database has focused on videos and images from terrorist groups on a United Nations list and so has largely consisted of content from Islamist extremist organizations such as Islamic State, al Qaeda and the Taliban.”

“Over the next few months, the group will add attacker manifestos — often shared by sympathizers after white supremacist violence — and other publications and links flagged by U.N. initiative Tech Against Terrorism. It will use lists from intelligence-sharing group Five Eyes, adding URLs and PDFs from more groups, including the Proud Boys, the Three Percenters and neo-Nazis.”

“The firms, which include Twitter and YouTube, share “hashes,” unique numerical representations of original pieces of content that have been removed from their services. Other platforms use these to identify the same content on their own sites in order to review or remove it.”

Three years ago the mass media warned us about Five Eyes demanding that tech companies give them backdoors to users’ encrypted data, and now they finally got their wish.

The dangers of Big Tech giving URLs, PDFs and personal information to a global intelligence agency will allow governments to secretly track and ID people and organizations they deem a threat.

Radio New Zealand said if one government has access to this information, then other government’s will request it as part of doing business with another country.

New Zealand’s Privacy Commissioner also warned that there is nothing stopping governments’ from abusing their access to people’s social media posts. And that is the real danger of letting Big Tech, Five Eyes and the U.N. decide who is a terrorist or extremist.

“Even then you don’t solve the technical challenge of allowing access for legitimate purposes while maintaining a secure network, and people in the tech industry tell me this is impossible” Privacy Commissioner John Edwards said.

The GIFCT claims to “bring together the technology industry, government, civil society, and academia to foster collaboration and information-sharing to counter terrorist and violent extremist activity online.” But what it does not tell you is how they decide to brand someone a terrorist or extremist.

GIFCT admits that Big Tech has been secretly compiling a database of “hashes” or unique digital fingerprints of suspected terrorist/extremist social media posts since 2016.

If the GIFCT’s secret social media database and CIP sounds familiar, that’s because it is.

The United States Postal Service and Fusion Centers across the country have been secretly spying on Americans social media for years.

Earlier this week, PayPal announced that they are working with the Anti-Defamation League (ADL) to investigate how extremist and hate movements in the United States take advantage of financial platforms to fund their criminal activities.

PayPal is basically setting up its own version of GIFCT to justify monitoring people’s transactions under the terrorist/extremist umbrella. As the article mentioned, PayPal and the ADL will “uncover and disrupt the financial flows of anti-government and white supremacist organizations” on their own!

“The information collected through the initiatives will be shared with other firms in the financial industry, law enforcement and policymakers, PayPal said.”

It is only a matter of time before GIFCT censorship will be used to monitor and stop protests that corporations and the White House disapprove of.

As Caitlin Johnstone so eloquently put it:

Using the GIFCT to allow corporations and Five Eyes to ban and censor whoever they want, put’s everyone’s freedom at risk.

Not sure why people engage in socialist media… but I do have a couple of theories.

[…] Biden is big brother or at least a very confused brother that still wants to know everything about you…Big Brother Biden “B3”https://www.technocracy.news/five-eyes-biden-authorizes-access-to-everyones-social-media/ […]

Freedom is gone, we just have not admitted it yet. The question now is how to we reclaim it.

Well as they said if you don’t like it just start your own social media platform. Then they shut down Parler and let’s face it, why you would rely on Amazon to operate Parler is just stupid! Disney didn’t start out as a woke, anti-human, anti-Christ monopoly, because they would have been soundly rejected by the principled society of the time and tipped off the people to what was coming. So they plagiarised old European fairy tales and packed them up in fancy lights and colors to make some bucks, then they gained credibility and started bearing fruitful alliances with… Read more »

Constitutionally he doesn’t have that kind of authority does he?