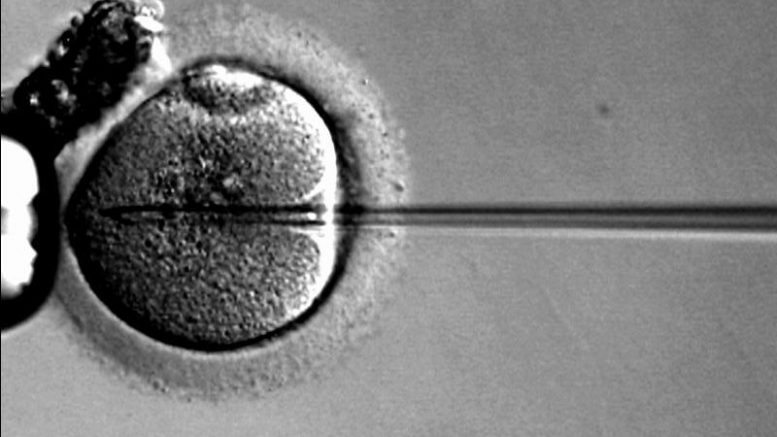 The human germline is in great jeopardy of permanent change as Technocrat scientists fiddle with life outside of any ethical debate on the wisdom of doing so. ⁃ TN Editor

Artificial human life could soon be grown from scratch in the lab, after scientists successfully created a mammal embryo using only stem cells.

Cambridge University mixed two kinds of mouse stem cells and placed them on a 3D scaffold. After four days of growth in a tank of chemicals designed to mimic conditions inside the womb, the cells formed the structure of a living mouse embryo.

The breakthrough has been described as a ‘masterpiece’ in bioengineering, which could eventually allow scientists to grow artificial human embryos in the lab without the need for a sperm or an egg.

Growing embryos would help researchers to study the very early stages of human life so they could understand why so many pregnancies fail, but is likely to prove controversial and raise ethical questions about what constitutes human life.

urrently scientists can carry out experiments on leftover embryos from IVF treatments, but they are in short supply and must be destroyed after 14 days. Scientists say that being able to create unlimited numbers of artificial embryos in the lab could speed up research while potentially removing some of the ethical boundaries.

“We think that it will be possible to mimic a lot of the developmental events occurring before 14 days using human stem cells using a similar approach to our technique using mouse stem cells,” said Professor Magdalena Zernicka-Goetz from the Department of Physiology, Development and Neuroscience at Cambridge, who led the research.

The embryos were created using genetically engineered stem cellscoupled with extra-embryonic trophoblast stem cells (TSCs) which form the placenta in a normal pregnancy.