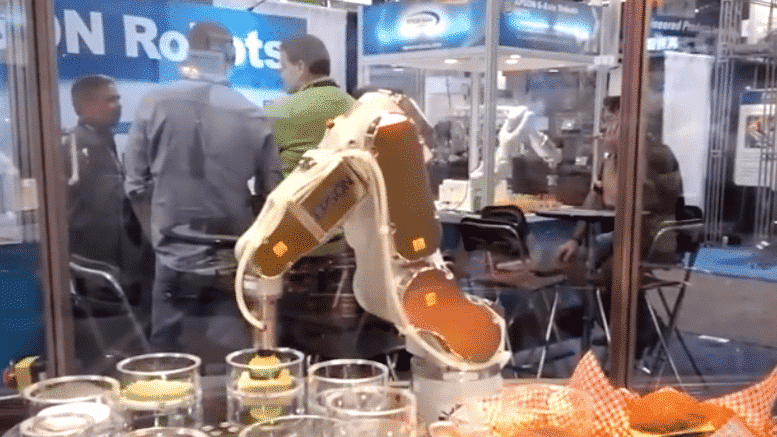 Technocrats working robotics are pushing hard for a Universal Basic Income throughout society because they understand the vast damage they will cause to the labor force. The ethical issue does not concern them, as they ‘invent’ simply because they can. ⁃ TN Editor

A secretive robotics startup has raised a new round of venture funding as part of its quest to replace humans with robots in the kitchens of fast-food restaurants.

Momentum Machines secured over $18 million in financing, according to a SEC filing in May. The startup has generated investments from top VC firms Google Ventures and Khosla Ventures in the past.

In 2012, Momentum Machines debuted a robot that could crank out 400 made-to-order hamburgers in an hour. It’s fully autonomous, meaning the machine can slice toppings, grill a patty, and assemble and bag a burger without any help from humans.

The company has been working on its first retail location since at least June of last year. There is still no scheduled opening date for the flagship, though it’s expected to be located in San Francisco’s South of Market neighborhood.

San Franciscans have been warming up to the idea of a restaurant experience with minimal human interactions for years. In 2015, futuristic food-chain Eatsa opened downtown. The vegetarian restaurant, which specializes in quinoa bowls, automates the ordering and pick-up process. It’s since expanded to New York and Washington, DC.

In San Francisco, robots also run food deliveries for Yelp’s Eat24 and pour coffee at Cafe X. These changes, along with other evidence that AI could displace huge swaths of workers, have even prompted a San Francisco politician to consider a “robot tax” to help offset the economic devastation a robotic workforce might bring.

fast food is neither fast nor food. and when it is prepared by robots it is not clean either.

We all should be resisting in two ways:
First – don’t use all the kiosks and smart phone ordering that are appearing in all the fast food and chain restaurants today and
Second – when people talk or writers use the words “universal basic income” reply back – “you mean welfare, right”. They are changing the language to program people to accept more people on welfare – the “dole”.

Robots may not have the human touch like a fast food employee, but at least they don’t spit in your hamburger when they’re having a bad day. As for myself, I would never eat in these joints anyway, human or robot, no matter how hungry I get.

Now all they need to do is to develop a robot to be their customer. I’m personally not going into a “restaurant” that doesn’t offer face-to-face service, with food prepared by a live human being.