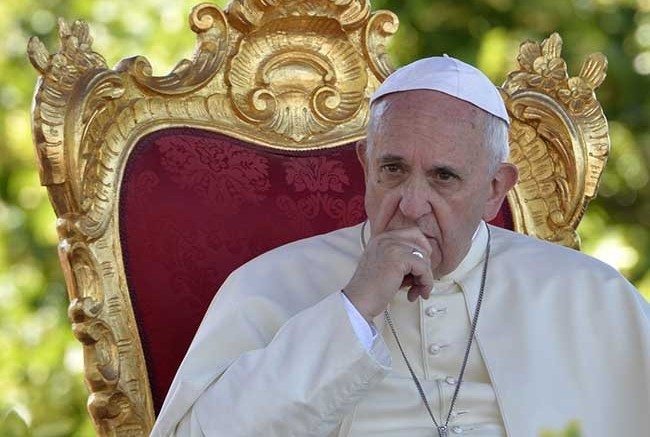 Pope Francis looks on during a meeting with youth of the diocese on July 5, 2014 in Castelpetroso, southern Italy, as part of his one day visit in the Molise region. (ANDREAS SOLARO/AFP/Getty Images)

For the first time in the history of America, a Catholic Pope will address a joint session of the U.S. Congress on September 24, 2015.

With approximately one-third of Congress being Catholic, including Speaker Boehner and former Speaker Nancy Pelosi, this promises to be a defining moment of the 114th Congress.
But, why is the Pope really here and what is his real mission?

First, he is here to address the opening session of the UN Summit for the Adoption of Post-2015 Development Agenda (2030 Agenda) that starts the next morning. This is arguably the most important meeting of the United Nations since the so-called Earth Summit in Rio de Janeiro in 1992 that produced the Agenda 21 document and the doctrine of Sustainable Development itself.

Second, the Pope will enshrine his major Encyclical on climate-change titled Laudato Si’, On Care For Our Common Home, which is a forcefull appeal for rapid implementation of all policies contained in 2030 Agenda, namely, Sustainable Development.
The 2030 Agenda promises the end of poverty and hunger, good education and jobs for every person, decent shelter and a life of personal dignity. These are lofty goals, but are they for real? Or do they sound like a bait-and-switch scheme that contains a potentially dangerous payload?

The 2030 Agenda document proposes 17 Sustainable Development Goals and 169 targets to their achievement. The framers claim that there was wide public consultation achieved to build consensus between all stake-holders, public and private organizations and citizens. Nonsense.

The actual creation of the 2030 Agenda is easily traced directly back to an earlier UN project called the High-Level Panel of Eminent Persons on the Post-2015 Development Agenda that met in July 2012 and concluded on May 30, 2013. There were only 27 elite members of this group, each handpicked from around the world and summarily appointed by the UN Director-General Ban Ki-moon.

The U.S. was represented by John Podesta, founder of the Center for American Progress and member of the elitist Trilateral Commission, who subsequently went to work for President Obama as a Senior Policy Consultant on Climate Change.

The committee of 27 “Eminent persons” delivered their concluding document to be ratified by another UN group, the High-Level Political Forum on Sustainable Development that met this summer from June 26 through July 8.

It is this very document that is to be presented for a global vote at the general plenary session of the UN on September 25. And, this is an all or nothing vote: Further changes will not be suggested or allowed.

2030 Agenda builds upon Agenda 21 and Sustainable Development that was first created at the Earth Summit held in Rio De Janiero in 1992. It not only extends the original goals, but it also gives them a definitive timeline – 2030 – to be fully implemented.
In simplest terms, Sustainable Development is a replacement economic system for

Capitalism and Free Enterprise. It is a system based on resource allocation and usage rather than on supply and demand and free economic market forces.

Christiana Figueres, Executive Secretary of the UN Framework Convention on Climate Change referred to this last March when she stated,

She amplified by adding, “This is probably the most difficult task we have ever given ourselves, which is to intentionally transform the economic development model, for the first time in human history”

In short, twenty-seven appointed and narrow-minded UN loyalists have created deeply transformative policies and timelines to literally overturn the world’s current economic system for a completely untried and untested one, and yet it boldly promises to “end poverty and hunger, in all their forms and dimensions,” ensure that “all human beings can enjoy prosperous and fulfilling lives,” and that an era of global peace will result.

This is dangerously absurd. Any honest economist would instantly balk at such Pollyannaish promises of Utopia, and the American public should do so as well. The fact is that these wild promises of prosperity for all are merely the candy coating to deceive the world into going along with its own economic destruction. Yes, the stakes are really that high.

And now you have an idea of why Pope Francis – the most visible religious figure in the world – has been called in to deliver the keynote address on September 25th and why he will smooth-talk Congress the day before to minimize any possible resistance to the plans of these globalist hucksters.