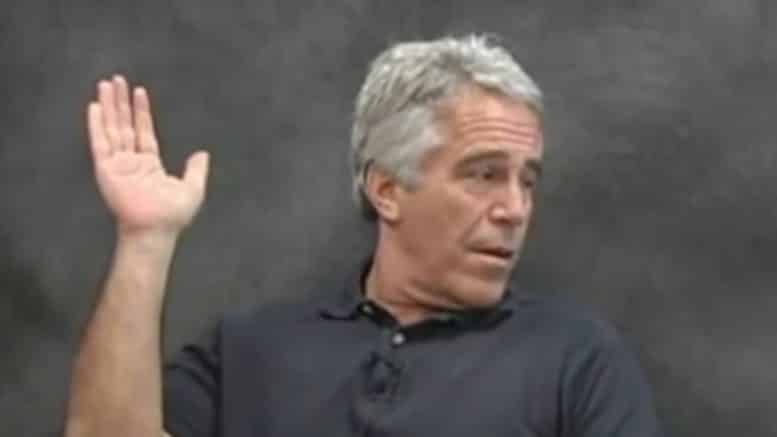 Jeffrey Epstein is both a Technocrat and a Transhuman, both of which are based on Scientism.

Scientism is a religion that believes all truth is derived from scientific inquiry and that all other truth is bogus. French philosopher Henri de St. Simon (1765-1825) figures prominently in Scientism, Technocracy and Transhumanism.

Transhumans are detached from reality because they believe that science and technology will allow them to escape death and live forever… like gods. Once convinced that you are a god (or at least headed in the right direction), your behavior is viewed as transcendent and ‘anything goes’. This would explain Epstein’s pedophile behavior that he did not try to hide but rather flaunted it to his elite cronies.

In addition to cavorting with untold numbers of beautiful underage females, Epstein planned on using his own semen to impregnate the chosen ones and thus improve the human race.

Epstein also planned to cryonically freeze his head and his penis, so that future science could bring him back to life to live forever. Apparently, he thinks that future resurrection would allow him to continue his sexual behavior with future juveniles.

With the large number of global elite who participated in Epstein’s follies and who are at risk for being exposed, arrested and convicted, there is likely a huge price on Epstein’s head, frozen or not.

Below are two recent articles…

Financier and alleged sex trafficker Jeffrey Epstein confided to prominent scientists and businessmen a vision of seeding the human race with his DNA by impregnating women at his sprawling New Mexico ranch. The disgraced hedge fund manager, who was charged in July with sex trafficking dozens of underage girls as young as 14, had discussed the idea since the early 2000s at assorted dinners and gatherings — outlining a plan wherein women would be inseminated with his sperm and birth his children, four unnamed sources told The New York Times.

While there is no evidence of such activities, Epstein reportedly told numerous individuals about the plan, which likely stems from his interest in transhumanism: a science (similar to the discredited eugenics) that involves “improving” humans through methods like genetic engineering and artificial intelligence. Epstein’s lawyers did not respond to the Times‘ requests for comment.

Author and virtual reality creator Jaron Lanier recalled to the Times that a scientist (who claimed to work at NASA) told him Epstein aimed to impregnate 20 women at a time at his New Mexico property. The scientist told Lanier that Epstein based the concept on the Repository for Germinal Choice, the now-defunct California sperm bank commonly believed to include sperm from only Nobel laureates. (The only publicly known Nobel contributor was physicist William Shockley.)

Scientists cited in the report say Epstein discussed the idea freely in certain settings — including a 2001 dinner and a 2006 conference in the Virgin Islands. Alan M. Dershowitz, a professor emeritus of law at Harvard, recalled a lunch Epstein hosted in Cambridge, Massachusetts at which the financier discussed the idea of how to genetically improve humans.

Jeffrey Epstein was a transhumanist. Here’s what that means

Jeffrey Epstein, who was charged earlier this month with trafficking dozens of underage girls, reportedly told various scientists in the early 2000s that he wanted to “seed the human race” with his DNA, according to The New York Times.

Epstein said he’d do this, The Times reports, by impregnating 20 women at a time at his ranch in Santa Fe, New Mexico.

There is no evidence to suggest that Epstein took any steps toward making this vision a reality. But the idea reportedly stemmed from Epstein’s interest in tge philosophy of transhumanism: The belief that people can (and should) artificially enhance the human body using modern technology.

Transhumanists herald genetic engineering and artificial intelligence as promising ways to improve human performance. They advocate, essentially, for the use of technology — including nanomedicine, robotics, brain-computer integration, and more — that alters typical human physiology in order to better our body and brain.

Accused sex trafficker Jeffrey Epstein toyed with an unorthodox plan for shaping the future of the human race: He imagined impregnating as many as 20 women at a time at his New Mexico ranch, distributing his DNA for the betterment of our species, The New York Times reported today (July 31).

Epstein is thought to have drawn inspiration from an ideology that had purportedly intrigued him for decades. Known as “transhumanism,” it describes manipulating or augmenting human genetics using technologies such as artificial intelligence and gene-editing, according to the Times.

But Epstein’s plan had closer ties to a precursor of transhumanism: eugenics. This now-discredited movement, once popular in scientific and academic circles in the Western world, also championed shaping a “better” human race, through selective breeding for certain traits. However, so-called undesirable traits were generally those associated with minorities and people who were poor and uneducated, according to the Historical Collections at the Claude Moore Health Science Libraries, at the University of Virginia(UV). [9 Absolutely Evil Medical Experiments]

Over many years, Epstein wined and dined a number of notable scientists and peppered them with questions and his own opinions about human genetics, according to the Times. He invited scientists to lavish parties and dinners, sponsored their attendance at conferences and even funded their research.

At many of these gatherings, Epstein would talk to researchers about DNA, “superior humans” and his plans for inseminating women at his ranch.

Disgusting to me but ultimately to God Almighty who will judge him righteously. He is no different than Hitler then. Atheism is a religion, a religion of self and it came from the devil himself who thinks he can be God. Yes there are those who worship him but Satan is going into the lake of fire which was created just for him and his evil angels. We don’t have to join him. Those who do not believe in the true God of heaven are no different than this man. All will go into judgement, there is none righteous no… Read more »

I certainly hope that all this by-line subterfuge which is beginning to form-up in the news does not derail the public mind from the FACTS and allow Epstein to fly away either through release or an insanity plea. (typical, left hand, right hand diversion technique) Of course, Epstein has a superiorly bent mind or he wouldn’t have been thumbing his nose at the convention of not “doing children”. No surprise there. Epstein being in jail forever or dead is not the larger issue here. What grows more important every day is the exposure of his network of self-appointed, self-loving elitists… Read more »