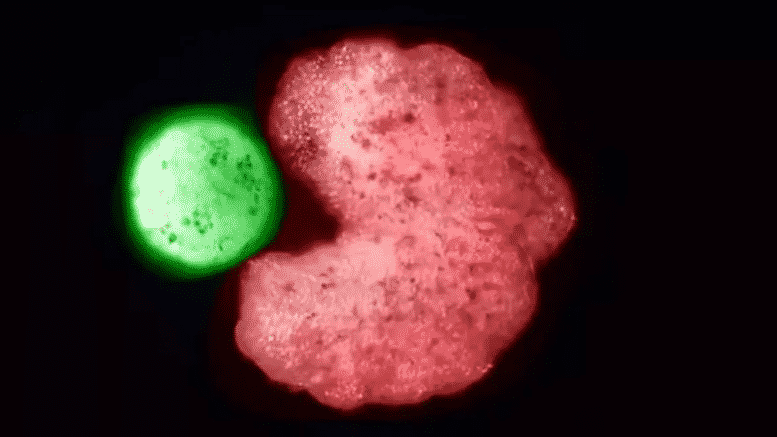 Please Share This Story!
PDF 📄
Technocrats invent because they can, not because there is a demonstrated need to do so. Synthetic life designed by AI is a holy grail of both Technocracy and Transhumanism, taking humanity closer to the Great Reset. It is not known what will happen when synthetic cells interact with organic tissue. ⁃ TN Editor

In a potential breakthrough for regenerative medicine, scientists have created the first-ever living robots that can reproduce.

The millimetre-sized living machines, called Xenobots 3.0, are neither traditional robots nor a species of animal, but living, programmable organisms.

Made from frog cells, the computer-designed organisms, created by a US team, gather single cells inside a Pac-Man-shaped ‘mouth’ and release ‘babies’ that look and move like their parents.

Xenobots are the work of biologists and computer scientists at Tufts University and the University of Vermont (UVM), who have detailed their creation in a new study.

Xenobots 3.0 follow the original Xenobots, reported in 2020 as the first living robots, and Xenobots 2.0, which can self-propel using hair-like ‘legs’ called cilia and have the ability to keep memories.

‘We’ve discovered that there is this previously unknown space within organisms, or living systems, and it’s a vast space.’

Xenobots will help develop computer-designed organisms for intelligent drug delivery, according to the team.

‘If we knew how to tell collections of cells to do what we wanted them to do, ultimately, that’s regenerative medicine – that’s the solution to traumatic injury, birth defects, cancer, and aging,’ said Michael Levin at Tufts University.

‘All of these different problems are here because we don’t know how to predict and control what groups of cells are going to build. Xenobots are a new platform for teaching us.’

In 2020, the scientists revealed they’d hand-built the original computer-designed Xenobots, adapted from stem cells of Xenopus laevis, a species of frog found in parts of Africa.

Stem cells – which can turn into any tissue or organ – were harvested from the embryos of the frogs and left to incubate.

Then, with tiny forceps and an even smaller electrode, a microsurgeon cut and joined the single cells under a microscope into the shapes specified by a computer.

Assembled into body forms never seen in nature, the cells began to work together, powered by embryonic energy stores.

At the time, they showed that the bots were programmed to perform a range of tasks including delivering medicine directly to a point in the body.

Self replicating, never ending, one can only foresee the many problems with just this alone. Let crazy people act like their God your asking for trouble.

Some times it seems they’re trying to make bible prophecy come to fruition.

The size of the microspheres means they can be injected into heart muscle. The researchers say their method, which was tested in rats, could help cure heart failure. Hmm… First create the problem, then sell the cure! What is the most common side effect of the gene therapie being coerced onto billions of people right this moment? Myocarditis, or heart nectrotization, or your heart muscle turning into dust from all the spike proteins forced through its valves. Once introduced to the brain and bloodstream, humans, like the frogs, will simply be “reprogrammed” to turn into monsters who will mine the… Read more »

Whenever darwinists-tehnocrats claim they created “living organism”, I immediately know that they used already living organism (frog cells in this case) to announce “great news”. I am never wrong about it and they never disappoint me about it!

Remember when Stephen Hawking warned us about AI? 😆 This is what he meant. Once this genii is out of the bottle, — O wait, it already is. . .

This is totally a world of Sodom and Gomorrah, the world is getting darker and darker, but our God said Arise for your light has come and the glory of the Lord has risen upon you.