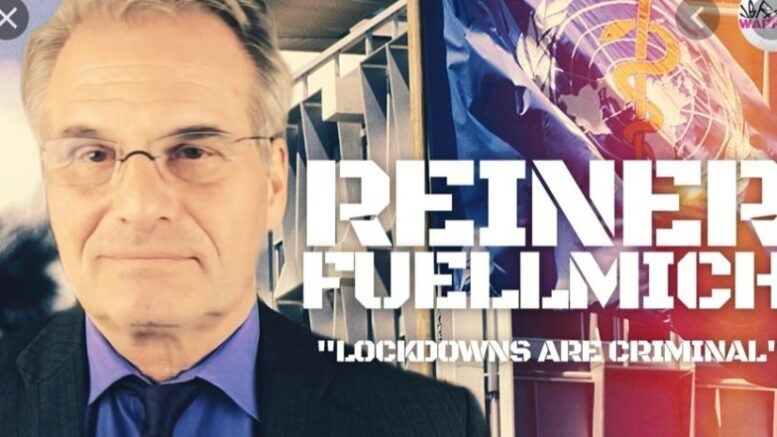 Please Share This Story!
PDF 📄
Medical and other Technocrats have ignored the original Nuremberg Code that requires informed consent for any experimental drug/medical procedures. An international legal case is being pursued to convene another Nuremberg Tribunal for Crimes Against Humanity. ⁃ TN Editor

Should the technocrats who pushed governments to lockdown their citizens be tried for crimes against humanity?

One prominent German lawyer, who is also licensed to practice law in America, thinks they should. And he is organizing a team of thousands of participating lawyers who want to prosecute a “second Nuremberg tribunal” against a cadre of international elites responsible for what he calls the “corona fraud scandal.”

Targeting the Davos, Switzerland-based World Economic Forum and its devotees among global political leaders, attorney Reiner Fuellmich says they are guilty of crimes against humanity for their perpetration of COVID-response policies that led to forced shutdowns, destroyed businesses, impoverished families, broken lives and a spike in suicide rates.

He has formed the German Corona Investigative Committee to pursue civil charges against the main perpetrators, among them being the head of the United Nations World Health Organization Dr. Tedros Adhanom. He hopes a successful class-action lawsuit will also lead to criminal charges.

Fuellmich was on the legal team that won a major lawsuit against German automaker Volkswagen in a 2015 case involving tampered catalytic converters in the U.S. He also was involved in a lawsuit that exposed one of Germany’s largest banks, Deutsche Bank, as a criminal enterprise. The bank was recently ordered by the U.S. Justice Department to pay $130 million to resolve corrupt practices that included money laundering, bribery and fraud between the years 2009 and 2016.

Fuellmich is licensed to practice law in Germany and the state of California.

He believes the frauds committed by Volkswagen and Deutsche Bank pale in comparison to the damage wrought by those who sold the Covid-19 crisis as the worst viral outbreak to hit the world in more than a century and used it to cause media-driven panic, government overreach and human suffering on a scale still not fully quantified.

The truth is revealed in the numbers, Fuellmich said, citing figures that show COVID-19 has not caused any statistically significant increase in the 2020 death counts over previous years.

The scam perpetrated on humanity hinged on one dirty little secret, he said – the PCR Test.

Not only are these tests not approved for diagnostic purposes but the inventor of the PCR Test, the late Kary Mullis, explicitly stated in an interview that this was never the purpose of his test.

Fuellmich explains in the video below how the coronavirus response of governments worldwide working in cahoots with the Bill Gates-funded U.N. World Health Organization “are probably the biggest crimes against humanity ever committed.”

“A number of highly respected scientists [he names several in the video including a Nobel Laurette from Stanford University] have concluded there has never been a coronavirus pandemic but only a PCR test pandemic,” he says.

“If someone tests positive it does not mean they are infected with anything, let alone with the contagious SARS-COV-2 virus,” Fuellmich says in the video.

He said persons harmed by the PCR-induced lockdowns are entitled to full compensation for their losses.

“The crimes committed by Mr. Christian Drosten [an epidemiologist and Germany’s version of Dr. Anthony Fauci] and Mr. Lothar Wieler, a veterinarian and head of the German equivalent of the CDC, and Tedros Adhanom, head of the WHO, must be legally qualified as actual crimes against humanity as defined in Section 7 of the International Criminal Code.”

He said the class-action lawsuit is the best avenue to try the case.

In a Feb. 24 article about Fuellmich’s effort, the journal Principia Scientific International quoted him saying “this COVID-19 crisis should be renamed the ‘Covid-19 Scandal,’ and all those responsible should be prosecuted for civil damages due to manipulations and falsified test protocols. Therefore, an international network of business lawyers will plead the biggest tort case of all time, the COVID-19 fraud scandal, which has meanwhile turned into the biggest crime against humanity ever committed.”

Here is a summarized translation of the most-recent update Fuellmich put out on his German website on Feb. 15:

“The hearings of around 100 internationally renowned scientists, doctors, economists and lawyers, which have been conducted by the Berlin Commission of Inquiry into the COVID-19 affair since 10.07.2020, have in the meantime shown with a probability close to certainty that the COVID-19 scandal was at no time a health issue.  Rather, it was about solidifying the illegitimate power (illegitimate because it was obtained by criminal methods) of the corrupt ‘Davos clique’ by transferring the wealth of the people to the members of the Davos clique, destroying, among other things, small and medium-sized enterprises in particular. Platforms such as Amazon, Google, Uber, etc. could thus appropriate their market share and wealth.”

Was the vaccine the reason for the virus?

Perhaps the most egregious outgrowth of the coronavirus scam has been the fear-mongering that not only led to devastating and non-scientific shutdowns but also the rush to market of an unproven, experimental vaccine, which is now making billions of dollars for Big Pharma.

Just like the lockdowns, the vaccine is unnecessary because there are already several well-documented treatments involving long-established drugs that are proven safe and widely available. Also just like the lockdowns, this vaccine carries potentially devastating long-term effects on human health. There are questions about its effects on the fertility of men and women, and it has already led to more than 600 deaths in the U.S. and more than 250 deaths in the U.K.

To make matters worse, it is becoming plainly obvious that the intent is to make this experimental vaccine mandatory for all of humanity. It was billionaire vaccine investor Bill Gates who originally floated the idea, in April 2020, that humanity could never return to “normal” until “we have a vaccine that we’ve gotten out to basically the entire world.”

This reporter predicted last April that the vaccine would eventually be made mandatory, largely by corporations using coercive tactics.

Wow! Please Lord expose this evil! I will not obey these evil people. We need to be strong and resist at all costs. Gates, Fauci, and the WHO are NOT elected officials, neither is the media, and it is so crazy that all this has been foisted on us. We all must stand in resistance against this evil cabal. They are laughing at all the people in the world, they are smug because their lies have been obeyed. Like little gods they enjoy the POWER, because Satan promised it to them. Not only did Satan promise them power, but riches.… Read more »

I agree with Dr. Fuellmich 100%! A Nuremberg principles to prosecute these gov’mnt, corporate, big pharma criminals to include THE BIG MEDIA & tech companies! especially that crazy CIA Youtube for censoring the world!

I am very glad this tribunal will be going after this movement.

“Nuremberg Tribunal” People should understand that the Nuremberg Tribunals were dictated by the victorious powers. Nothing was fair about these tribunals. They were show trials. Open, cheeky lies by the Allies had to be accepted as facts and were not allowed to be questioned or exposed as lies. No one needs such mendacious tribunals, because it is to be feared that the same criminals who now dominate the political stage will turn the victims into perpetrators in such tribunals.

IMO to understand sabout The Nuremberg Code is the Code writtend own after hearings about unvoluntarily injections in the CCs by the NAZIs in WWII. That is it, nothing show about it, all facts spoken out by the victims. It means it is THE guide for the judiciary world to make practices like the false PCR tests and then decide you have Corona-19 is done to control you but the main thing: it is a big money making exercise for Health Services and of course investors like Kill Gates and his foundations. The next thing is vaccination forced upon people… Read more »

A PCR test scamdemic indeed. Stop testing people for something that is completely made up and fictitious. Their tests are violating your rights on this earth. There has always been people sick and dying, they are just dressing it up as being COVID-19 aka certificate of vaccination PLANdemic. Do not let them metaphorically suffocate you with their demands to wear dog muzzles and recieve innoculations from stabby needles containing dangerous ingredients. Do not let them treat you like lab animals. It is utter madness what is going on in the world. Turn off the televisions, do not listen to the… Read more »

Call it out for what it is, world! Your home is being robbed and ransacked. The thieves will be torching it on their way out. They want total destruction of you and everything connected with you. But don’t call the police, or fight them, or even yell at them. They might be offended! Here are the CEO’s of the four pharma companies pushing the deadly toxxine: Stephane Bancel (Moderna) Albert Bourla (Pfizer), Alex Gorsky (Johnson & Johnson), Pascal Soriot (Astra Zeneca). See a common thread? Who owns, runs, programs, controls the MSM? From all I’ve learned, the central bankers are… Read more »

Imagine if the inventor of the PCR test were alive to see how they are using his test. But, strangely (and conveniently), Kary Mullis died in August 2019, just before the whole thing began.

Probably the 21st of April this year!

As much as I’d love to have some hope here, the parasite class have long ago sealed off an ways to link these scandals to them .There are no doubt many insiders on the parasite’s payroll ready to stall, obfuscate, distort, lie and manipulate anyone who tried to get this thing moving. I’ll never lose hope but it’s beginning to wane.

Trust The Man and his Plan. We are winning!

The Silent, Obedient, Radical Protester. Is this you? - RAY OF TRUTH

[…] does not give you the right to harm and even kill your patients. There are already legal procedures afoot to put you all before a court, a modern-day Nuremburg Trial, and sentence you for your crimes. Think about […]