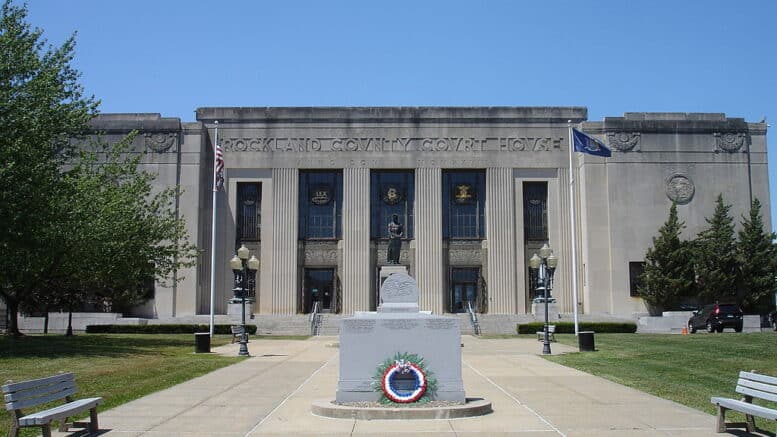 Please Share This Story!
PDF 📄
Rockland County, New York is ramping up to issue subpoenas to Constitution-minded citizens who tell contact tracers to pound sand. If you don’t obey the subpoenas, the court can issue an arrest warrant and the police show up at your door.

Those who were actually served with subpoenas didn’t have as much backbone as they professed: “County officials said Thursday that after issuing eight subpoenas, all eight people were now cooperating with contact tracers.” ⁃ TN Editor

Sources tell News 4 they’re aware of at least three large parties in Rockland in recent weeks; one was held by someone with COVID June 13

Health officials are investigating a new cluster of eight or more COVID-19 cases in Rockland County tied to a large party earlier this month, but they’re running into trouble with contact tracing because people refuse to cooperate.

The county plans to resort to subpoenas, as it did during its measles outbreak some years ago, to compel people to work with contact tracers as they work to contain a new potential outbreak. It may mark the first time in the tri-state area that such a measure has been taken over COVID contact tracing noncompliance.

That party linked to the new potential cluster was the first of three large parties in Rockland County in the last two weeks. It was hosted June 13 by someone in New City who was sick with coronavirus at the time, sources say. County officials said Wednesday that the host knew they were symptomatic and held the party anyway.

Officials trying to contain further spread say multiple people who attended one or more of the three parties have refused to cooperate with contact tracers. That strategy, along with testing, is critical to mitigating future spread, officials say.

With all of New York state in some phase of reopening, Gov. Andrew Cuomo is shifting his focus to monitoring test results on a daily basis across each region to identify potential hotspots before they emerge. Here’s the latest tracking data by region. For the latest county-level results statewide, click here

Rockland County has the highest percentage of daily positive tests (1.2 percent as of Wednesday) of all seven counties in New York’s Mid-Hudson region. While that is still a low number compared with the metrics seen earlier in the crisis, health officials are leery it could quickly surge upward — especially if they can’t find the emerging positive cases early and isolate them through tracing efforts.

The rolling seven-day average of positive daily tests for the Mid-Hudson region is at 1 percent, the same as the rest of the state. That seven-day average isn’t available to a county level on Gov. Andrew Cuomo’s website. Mid-Hudson, which is now in Phase III of the reopening process and recently resumed indoor dining, also includes Westchester County, the source of a separate new cluster.

Coronavirus is a sham. Think about it The media lies to the American people incessantly for as long as I can remember, COVID-19 shows up and they do an about face and start telling the truth? Are we really that gullible? We’re told this “highly contagious,” often fatal pathogen has a two week incubation period? If the virus is that powerful why does it take two weeks to manifest? What a crock! Wake up people before it is too late! You are walking around like a bunch of damned drones with masks on! You look like fools! STOP OBEYING THIS… Read more »

A medium lies; the media LIE.

Try that crap on me, wouldn’t be the first subpoena I have ignored. They can bang on my door all day but I won’t be home.

LMAO! I’m 77 and I will use the Hildabeest/ Biden reply…I can’t remember! Let them prove I can!

Dont worry. We have an forced injection which can make old people remember for their own sake and safety.
This new nano-gmo-dna technology can hack the software of memory and dig into your dark consciousness brain barrier and collect all your short term memory……..LOL.
And we are doing it for your safety and you will be happy when we have done it.

There’s nothing to sink my teeth into here. The outbreaks are baked into the hoax. Bill Gates et al aren’t giving up hoax. We know that. He’s winning. We know that. The world is ruined. I know that. It’s time for Armageddon.

only you can let him win

Carpenter v. US, they have to have a warrant for all phones. And it violates the 4th amendment. We the people are the ones in charge and the government works by our consent, I don’t consent to big Pharma, Bill Gates and others are not my boss.

It’s easy, tell them you went to city hall then over to democrat headquarters then on to the local college campus

Good idea. I was thinking about going to Capital Hill, the US House and Senate areas, governors mansions, state legislatures, the CDC, FDA and local goverment offices too to add to my contact list.

5 minute listen
WOW! This is an analogy everyone should truly think about… 🤔
https://www.facebook.com/christicrain/videos/10224667839262676/
#CoronaVirusHOAX #StopLockdown #EconomicCollapse

I haven’t been bothered with any contact tracers in my area yet. How are we supposed to know they’re not infected? Seems pretty lame to me for the government to be sending people out to meet with people that may be infected with CV19. This virus is allegedly so deadly and contagious the MSM tells us. They say you can even spread it by breathing among other things. First of all. I have no intentions of letting strangers into my house. If I have to let them inside. I will be spraying Lysol from the time they walk into my… Read more »