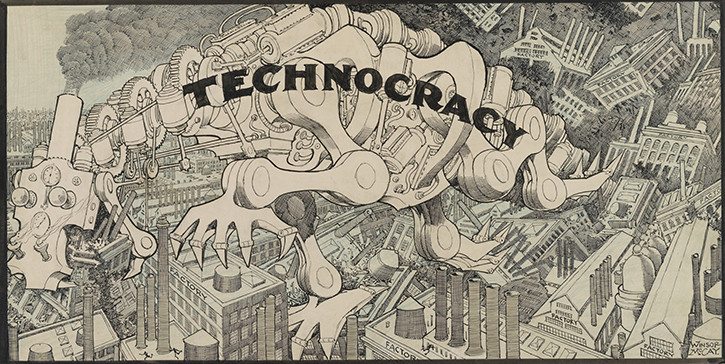 TN Note: The goal of historic Technocracy of the 1930s was to completely replace Capitalism. The goal is the same today. Technocracy and global elite futurist Jeremy Rifkin wrote about it 2006 in Radical New Economic System Will Emerge From Collapse Of Capitalism. Christiana Figueres, head of Climate Change at the United Nations, spoke about it last year: “This is the first time in the history of mankind that we are setting ourselves the task of intentionally, within a defined period of time to change the economic development model that has been reigning for at least 150 years, since the industrial revolution.” So, what more do we need to know about those who are actually cheering for the demise of Capitalism and the rise of Technocracy? If you don’t immediately get the picture of what is happening here, please buy and read Technocracy Rising: The Trojan Horse of Global Transformation.

They bounce back after terrorist attacks, pick themselves up after earthquakes and cope with pandemics such as Zika. They can even handle years of economic uncertainty, stagnant wages and sky-high unemployment. But no developed nation today could possibly tolerate another wholesale banking crisis and proper, blood and guts recession.

We are too fragile, fiscally as well as psychologically. Our economies, cultures and polities are still paying a heavy price for the Great Recession; another collapse, especially were it to be accompanied by a fresh banking bailout by the taxpayer, would trigger a cataclysmic, uncontrollable backlash.

The public, whose faith in elites and the private sector was rattled after 2007-09, would simply not wear it. Its anger would be so explosive, so-all encompassing that it would threaten the very survival of free trade, of globalisation and of the market-based economy. There would be calls for wage and price controls, punitive, ultra-progressive taxes, a war on the City and arbitrary jail sentences.

For fear of allowing extremist or populist parties through the door, mainstream politicians would end up adopting much of this agenda, with devastating implications for our long-term prosperity. Central banks, in desperation, would embrace the purest form of money-printing: they would start giving consumers actual cash to spend, temporarily turbo-charging demand while destroying any remaining respect for the idea that money needs to be earned.

History never repeats itself exactly, but the last time a recession was met by pure, unadulterated populism was in the Thirties, when the Americans turned a stock market crash and a series of monetary policy blunders into a depression. President Herbert Hoover signed into law the Smoot-Hawley Tariff Act, dreamt up by two economically illiterate Republican senators, slapping massive taxes on the imports of 20,000 goods and triggering a global trade war. It was perhaps the most economically destructive piece of legislation ever devised, and it took until the Nineties before the damage was finally erased.

That is why we must all hope that the turmoil of recent days in the financial markets, and the increasingly worrying economic news, will turn out to be a false alarm. It would certainly be ridiculously premature, at this stage, to call a recession, let alone a financial crisis. But at the very least we are seeing a major dose of the “dangerous cocktail of new threats” rightly identified at the turn of the year by George Osborne, a development which will have political repercussions even if the economy eventually muddles through.

What brought on the global stock market crash in 1929, was that the Central bankers had too much control over governments economic systems. President Franklin D Rosevelt and other US political leaders put bank regulating controls on the Federal reserve and banks that stabilized bank industry for nearly 70 years until one such main stabilizing pillar of the financial market was changed in 1999, this being the Glass and Steagall Act. This policy seperated savings and loans from the securities and investment divisions. The removal on this division in the banking divisions, created a situation were trading of toxic assets… Read more »

Bring it on i say, sick and tired of all the noise, rip the puss stained covers off so the festering infection can finally see the light of day! They say sunlight is the cure! Maybe the real people who produce real things will be the new kings just as they are already supposed to be under the term Democracy “kings, queens, princesses & princes without subjects” is written in the deal, so what happened?