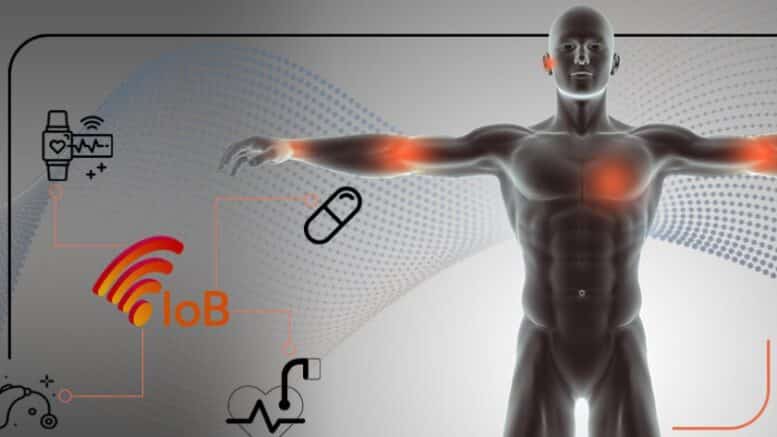 Please Share This Story!
PDF 📄
The conclusion to this detailed explanation of the Internet of Bodies (IoB) correctly states, “Be warned that this technology may make your life easier in the short term, but its long-term purpose is to make you a dehumanized slave.” ⁃ TN Editor

The RAND Corporation, the think tank behind some of the world’s most influential and frightening ideas and technologies, has released a report titled

RAND was, and is, the essential establishment organization. Throughout its history, RAND has been at the heart of that interweaving of Pentagon concupiscence and financial rapacity that President Eisenhower aimed to call the military-industrial-legislative complex. RAND has literally reshaped the modern world—and very few know it.

With this understanding, there is much cause for alarm with the issuance of this new report.

What is the Internet of Bodies (IoB)?

RAND defines the IoB as “a growing industry of devices that monitor the human body, collect health and other personal information, and transmit that data over the Internet.” In order to qualify as an IoB device, the technology must:

An IoB device must also satisfy one or both of the following:

The technology that Hollywood has presented over the years in dystopian sci-fi fantasies is now a reality. In the very near future, the technocratic overlords of science, health, finance, and Big Tech desire humanity to go from wearable devices to devices embedded within our bodies.

How IoB intersects with IoT

IoT devices such as smart meters, smart watches, virtual assistants, and self-driving cars connect directly to the Internet or through a local network. As IoT devices become more commonplace, experts predict that acceptance of and desire for IoB devices will also increase. The RAND report predicts:

By 2025, there will be more than 41 billion active IoT devices, generating 2.5 quintillion bytes of data daily on environment, transportation, geolocation, diet, exercise, biometrics, social interactions, and everyday human lives. This explosion in IoT devices will result in further popularity of IoB devices.

IoB Products in Use or Being Developed 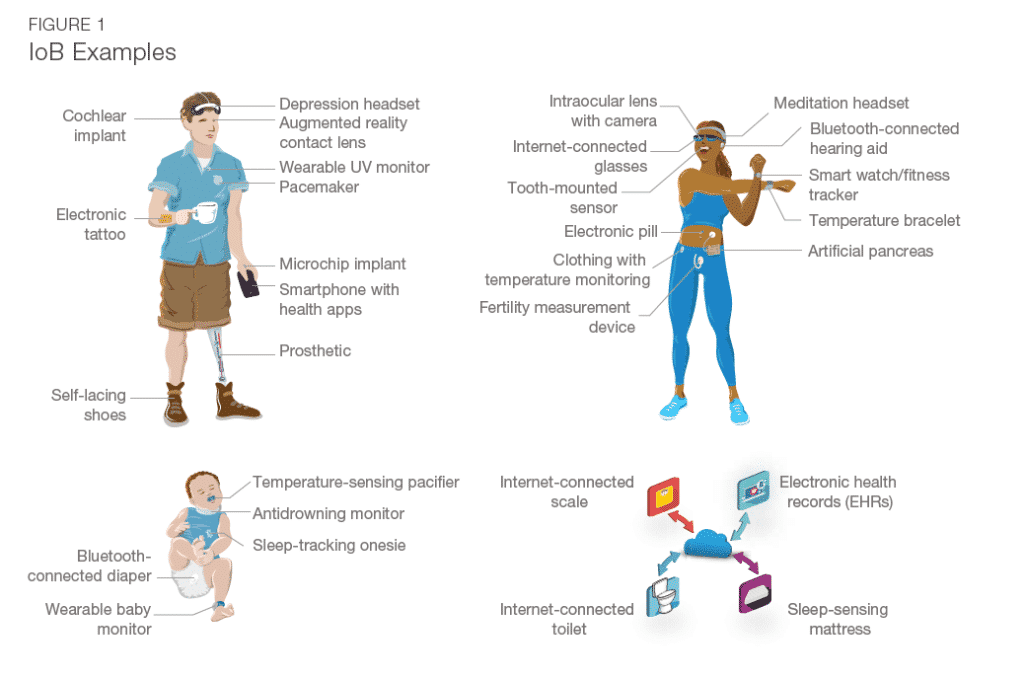 Figure 1 from the RAND report shows just how invasive and pervasive IoB technology can become. By the time it is fully unleashed, no part of the human body will escape its interference. They even plan to have our toilets connected to the Internet where they will monitor our waste using BioBot technology to determine what we eat, what drugs we may take, and analyze our genetic material!

Here are just a few examples of the technology currently being developed:

Not even babies will be able to escape this nightmare where every bodily function is constantly tracked and monitored. The sad part is that many people will welcome these intrusive technologies because they’re convenient and timesaving. However, exchanging bodily sovereignty for convenience is never a fair transaction. It almost always serves to benefit those who desire more control over our lives. Through adoption of technological advancement, humans are consenting to allow technocrats to dictate every facet of life. Soon doctors will be able to know if you are taking prescribed medication appropriately, and will have tools to report you if you aren’t. Digital pills will be used to record your medical compliance as the RAND report signals:

In 2017, the FDA approved the first digital pill: an aripiprazole tablet with an ingestible sensor embedded in the pill that records that the medication was taken. The product is approved for the treatment of schizophrenia, acute treatment of manic and mixed episodes associated with bipolar I disorder, and for use as an add-on treatment for depression in adults… The system works by sending a message from the pill’s sensor to a wearable patch. The patch transmits the information to a mobile application so that patients can track the ingestion of the medication on their smartphone. Patients can also permit their caregivers and physician to access the information through a web-based portal.

If you’re wondering what will power all of this forthcoming technology, the answer lies in a combination of 5G, next generation Wi-Fi, and satellite Internet. These advanced systems will increase data transfer speeds and offer extra-low latency so that those audio and visual dropouts on Zoom calls will be relegated to the dust bin of history. Combined, these systems will provide the power and resources necessary to create a control and surveillance grid that can be monitored in real time. RAND confirms this purpose, illustrating that:

These advancements will enable consumer IoT technologies, such as smart home systems, to connect to IoB devices so that, for example, one’s smart thermostat will be linked to her smart clothing and automatically can regulate the temperature in her home. Greater connectivity and the widespread packaging of IoB in smartphones and appliances—some of which might collect data unbeknownst to the user—will increase digital tracking of users across a range of behaviors.

As 5G is widely being rolled out in the U.S. and other parts of the globe, plans are already being made to perfect and implement 6G. According to author Thomas S. Rappaport, 6G technology “will usher in the ability to send wireless signals at the rate of human computation”… and “could mean that human intelligence could eventually be sent over the air instantaneously.” Experts predict 6G will be widely available by 2030.

To top it off, nanobiotechnology is being used to manipulate cells and interconnect human bodies to the Internet. Scientists, researchers, and tech geniuses are attempting to play God by reengineering our cell structures, causing them to communicate with IoB devices. According to an article in News Medical, nanotechnology has “enabled several types of next-generation vaccines” such as the mRNA coronavirus vaccine being developed by Moderna. 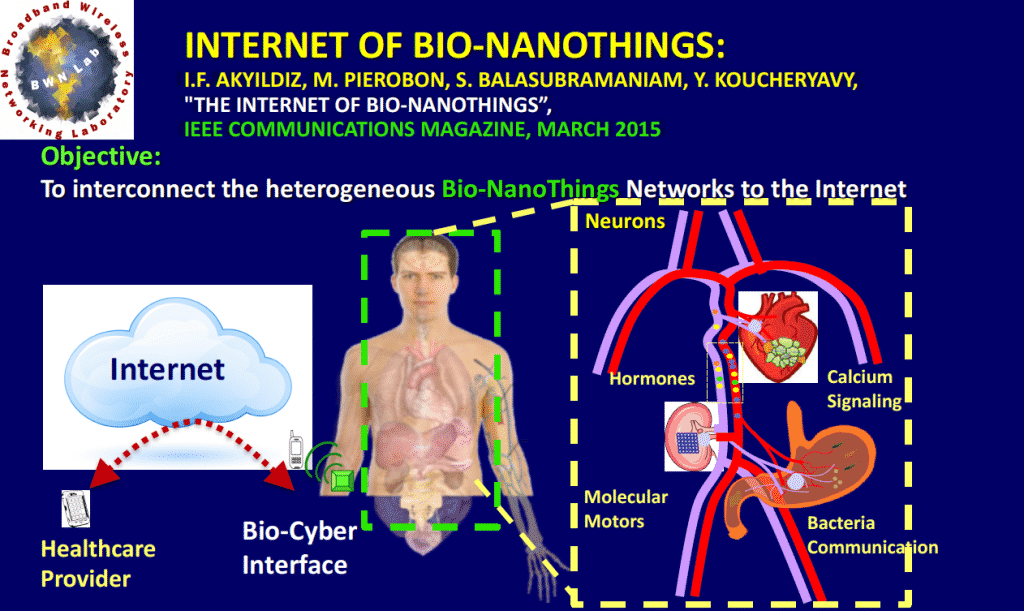 The potential downside of IoB technology has been clearly established, but can anything good come out of this? There is no way IoB could be sold to the masses if it didn’t promise to improve quality of life. As RAND indicates:

IoB might enable wider access to health care by enabling inexpensive “distributed” or “democratized” health care or by decreasing the need for risky or costly medical intervention. Through greater health awareness, improved prevention, and more-effective intervention, IoB even has the potential to drive down health-care costs. It was hypothesized that early detection and intervention through remote monitoring were the primary drivers of the reduction. IoB devices can gather vital data to provide medical alerts to doctors, patients, and caregivers. IoB devices might also prove useful in guiding treatment for those who cannot speak or articulate their symptoms or thoughts, such as infants, stroke victims, or dementia patients, by alerting caregivers to significant changes in vital signs, for instance. IoB is a promising approach for developing real-time remote health monitoring systems for noncommunicable disease patients, most immediately diabetics and heart patients.

If any of these scenarios helps save and improve lives, then maybe IoB is a worthy endeavor. However, a careful reading of this quote reveals that IoB benefits are described with phrases such as “might enable,” “has the potential,” “might also prove useful,” and “is a promising approach.” In other words, IoB technology is still experimental and many things can go wrong if implemented on a wide scale.

We already know that radiation from mobile phones causes cancer. What happens when IoB devices powered by tech with even greater levels of radiation are implanted in the human body? Where are the long-term safety studies? If they already exist or are currently being conducted, who is sponsoring them? If the studies originate from the same industries poised to profit from their use, then malfeasance is all but guaranteed.

Unfortunately, it seems as though the negative consequences of IoB devices will far outweigh their advances. There are just way too many things that can go wrong as indicated in Table 4. 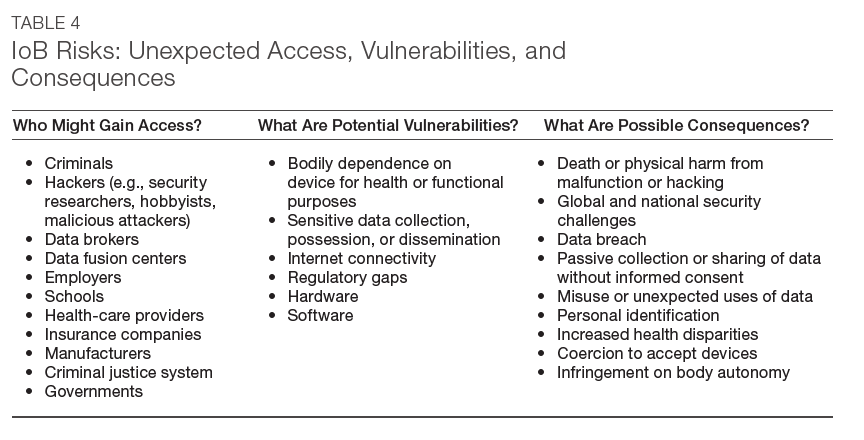 But the human body is a think in their view. Everything is a think, except the masters of course, they are godly.

Are they ever going to LEAVE US ALONE!

The RAND Corporation, the very corporation that has offices in most town as they write regulations and orders for local councils with their SUSTAINABLE BS AND SPEECHES FOR PM’s AND GOVENORS, and all the while this corporation woeld wide rules our govenments and councils and all by the ROTHSCHILD’S…… let hope their latest Agenda 2030 with its fascist/communist Great Reset to take ALL your private property away and any thing else, you will have to rent it all clothing too, OH and you WILL be happy…lol the double speak this scum comes out with, I see CHINA has rejected GATES/Faucci… Read more »

We are bathed in electromagnetic radiation. Cannot rule out IoB is entirely mechanical. Microbes found in all series of sealed spike protein “vaccines” by Dr. Pablo Campra Madrid. https://www.orwell.city/2021/10/microbiota.html Known graphene oxide (already proved in Japan) appears to be incorporating into these unknown microbes inside the bloodstream. Very similar to the Morgellon’s disease structures growing out of the skin. Unknown egg structure photographed in Pfizer and AstraZeneca. These microbes are NOWHERE near anything that is stated to be inside the subzero deep frozen vials or in ingredients list for potential uses. Graphene oxide is used for building nanostructures. Once migrated… Read more »

Neom’s “The Line” – City of the Dead – OffGuardian

[…] No part of their human bodies will escape its interference. Even the toilets will no doubt be connected to the Internet where they will monitor citizens’ waste using BioBot technology to determine what they eat, what drugs they take, and analyze their genetic material. […]

Neom’s “The Line” – City of the Dead - United Push Back

[…] No part of their human bodies will escape its interference. Even the toilets will no doubt be connected to the Internet where they will monitor citizens’ waste using BioBot technology to determine what they eat, what drugs they take, and analyze their genetic material. […]