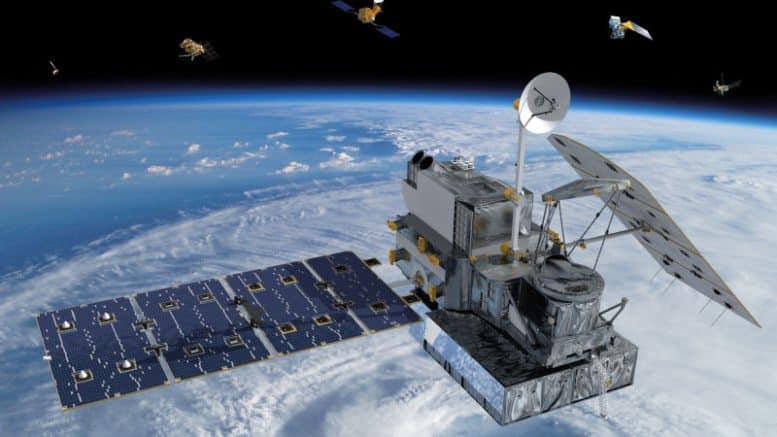 Bill Gates and his Technocrat buddies must be in data heaven over this announcement. Buried on EarthNow’s website is one telling purpose that is in the middle of a larger list: “Help ‘Smart Cities’ become more efficient.” Honestly, TN doesn’t think they really care about the first offering: “catching illegal fishing ships in the act.” The entire EarthNow press release is here. ⁃ TN Editor

EarthNow is a new company looking to provide satellite imagery and live video in virtually real-time. Its unsettling pitch describes a network of satellites that can see any corner of the globe and provide live video with a latency of about a second. And a look at the startup’s top investors gives a lot of confidence that this thing is happening.

On Wednesday, EarthNow announced that it will emerge from the Intellectual Ventures ISF Incubator to become a full-scale commercial business. Its first round of investors is comprised of a small group of complimentary powerhouses: AirBus, the SoftBank Group, Bill Gates, and satellite-industry vet Greg Wyler.

The amount of the initial investment hasn’t been disclosed, but the announcement says the funding “focuses primarily on maturing the overall system design to deliver innovative and unique real-time Earth observation services.” That makes it sound like the company is in its very early stages, but don’t be so sure. Wyler’s OneWeb has already deployed highly advanced satellites with a blazing fast 130ms latency and its goal is to have a constellation of hundreds of satellites beaming broadband around the globe by 2020.

EarthNow will use an upgraded version of OneWeb’s technology with a lot of hardware power packed into a 500-pound unit. “Each satellite is equipped with an unprecedented amount of onboard processing power, including more CPU cores than all other commercial satellites combined,” the announcement says. The satellites will also do an onboard analysis of the live imagery using machine learning, but the company doesn’t go into detail about what it will analyze or why it would be necessary to dedicate that processing onboard.

CEO Russell Hannigan told The Wall Street Journal that EarthNow will not only have a head start with OneWeb’s technology, it will also be able to use that company’s assembly line and manufacturing process. Hannigan estimated the total cost of the final system will be around $1 billion. SoftBank alone has put $1.5 billion into OneWeb, so that figure should be easily achievable. The Japanese investment giant sunk $1.25 billion into Uber this year, so it’s definitely not afraid of losing massive amounts of cash.

Notably, Gates’ contribution to the project isn’t mentioned, but it should be obvious. He’s rich, of course, but he’s also well-connected and brings a lot of global goodwill. The company’s goal is to make money selling its service to government and enterprise clients—and that’s kind of terrifying. Sure, governments have their own individual satellite operations, but the scale of what EarthNow is promising is jaw-dropping. Who better to calm worries and work through regulatory hurdles than the world’s most prolific philanthropist? He wouldn’t do anything immoral with that tech, would he?

For the record, the company lists a lot of potential uses for its network, including:

Catching illegal fishing in the act, watching hurricanes and typhoons as they evolve, detecting forest fires the moment they start, watching volcanoes the instant they start to erupt, assisting the media in telling stories from around the world, tracking large whales as they migrate, helping “smart cities” become more efficient, providing on-demand data about crop health, and observing conflict zones around the world.

Watching every step and move we make, in real time. This should make the people over at the UN very happy. Under UN Agenda 21 the satellites will keep an eye on people so they don’t leave their city concentration camps. Also since living or even going to the rural areas will be completely banned this will spot those trying to live in the woods for easy rounding up. The eye in the sky. Literally.