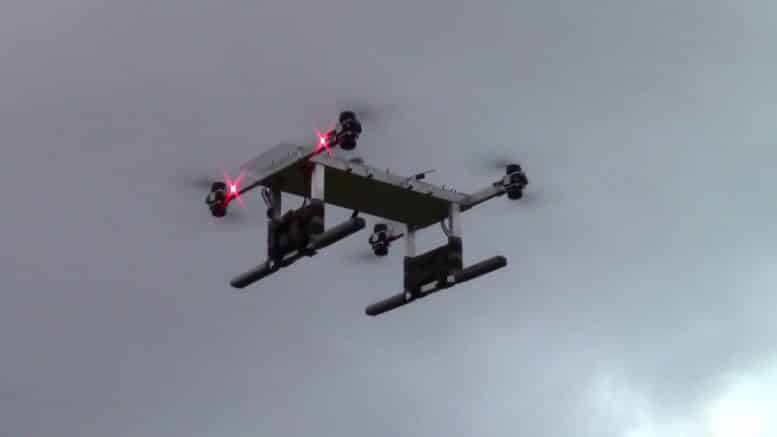 Boeing is the consummate military contractor, and one would expect this high-powered drone to have warfare implications, like delivering logistics to forward bases or troop movements. Reportedly, the drone will be able to transport up to 500 pounds per mission. ⁃ TN Editor

Most likely, your expectations for the age of drone delivery involve cute li’l quadcopters that descend onto your porch with a gentle bzzzz, deposit a box of diapers or a pizza or whatever else you just ordered online, before zooming back to base, ready to deliver the next whim. That’s the vision pitched by the likes of Amazon, UPS, and DHL, and it’s an appealing one.

Boeing has a different idea for delivery drones, one that’s bigger by an order of magnitude. Last week, the aerospace giant revealed a prototype for an electric, unmanned cargo air vehicle that it says could haul as much as 500 pounds—that’s 400 large Domino’s pizzas or 11,291 newborn-sized diapers—as far as 20 miles. But this big buzzer isn’t going to your house.

In fact, Boeing isn’t quite sure where it’s going. “It’s a concurrent exploration of a nascent market and nascent technology,” says Pete Kunz, the chief technologist for HorizonX, the Boeing skunk works-venture capital arm hybrid division that built this thing (the marketing team hasn’t given it a catchy moniker yet).

A team of 50 engineers spent three months building what looks like a car-sized Erector Set, fitted with eight spinning blades (each six feet from tip to tip), and weighing in at an auspicious 747 pounds. It navigates and looks for obstacles using components and software provided by Near Earth Autonomy, a Pittsburgh-based company in which HorizonX invests.

Now that the drone has completed its initial round of testing, done indoors at Boeing’s autonomous systems lab in Missouri, the team can start building up its skills. This first prototype can fly for about 15 minutes and carry 150 pounds, but Kunz and his team are confident they’ll reach that 250-500 pound capability before long. They predict it will fly between 60 and 70 mph and as high as a few hundred feet, plenty fast and high to do short hop deliveries.

Exactly what it will carry and where it will take it remains an open question. Boeing doesn’t have any concrete plans or timelines for commercialization yet, but Logan Jones, HorizonX’s senior director, says it could tote supplies to offshore oil rigs, or any other “dull, dirty, and dangerous” work now done by helicopters, which require expensive human pilots. It could take pallets from a port to a distribution center, or from a distribution center to a store. “This won’t show up at your door,” Jones says. (This is a commercial project, but it’s easy to see potential military applications, like moving supplies around combat areas.)