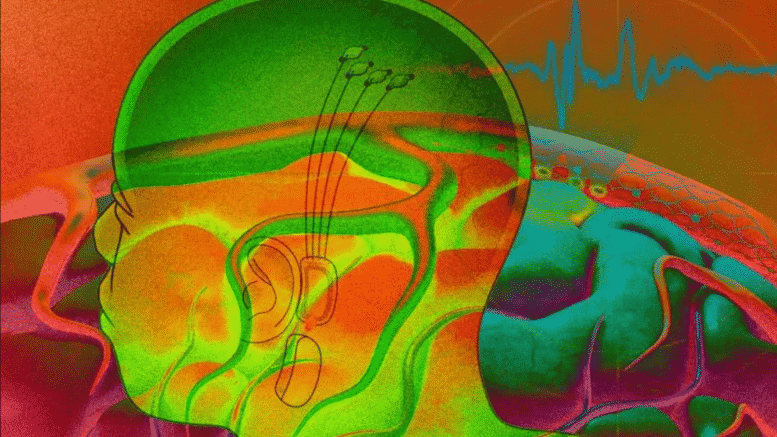 Posted By: Sarah McBride via Bloomberg May 4, 2022

Please Share This Story!
PDF 📄
The first human trials are in view, and it isn’t Elon Musk’s Neuralink Corporation that is leading the charge.  Synchron vision is “to transform medicine with unprecedented access to brain data” collected by using the blood vessels of the brain as “natural highways”. It is “the science of restoring, treating, and mapping the electrical activities of the brain.” ⁃ TN Editor

Synchron Inc., which develops a so-called brain-computer interface and competes with Elon Musk’s Neuralink Corp., enrolled the first patient in its U.S. clinical trial, putting the company’s implant on a path toward possible regulatory approval for wider use in people with paralysis.

The early feasibility study is funded by the National Institutes of Health and will evaluate the safety of the device, known as the Stentrode, the New York-based company said. It will also assess how effective the Stentrode is in helping patients control digital devices hands-free.

The trial represents a landmark for Synchron, the first startup working on brain-machine interfaces to begin a clinical trial seeking approval to sell its product. It also puts Synchron ahead of Neuralink, which is better funded but is still recruiting a trial director. Neuralink raised $205 million last year. Synchron has raised $70 million total.

Brain-computer interfaces, or BCI, could empower millions of disabled people to more easily communicate and engage in modern life. Paralysis affects more than 5 million people in the U.S. alone, according to researchers at the Centers for Disease Control. Farther in the future, Musk and other technologists talk of a world where anyone could receive implants to achieve a sort of superintelligence.

Synchron’s device, once implanted, travels to the brain through blood vessels. (Neuralink’s is implanted directly into the skull.) After it reaches the brain, the Stentrode translates brain activity into signals designed to allow texting, emailing, online shopping or other activities using an external device, Synchron said.

In the past, other BCIs have received regulatory approval to treat patients on a temporary basis. Synchron’s trial, if successful, would secure approval from the U.S. Food and Drug Administration for long-term use, not just for experiments like those in a lab.

Who is surprised? All the usual suspects were listed: NIH, FDA, Musk and the newcomer who is not well known. And! It’s all for SAFETY, SECURITY, DISABLED HEALTH!! Let’s all be sad, now. WHA, WHA, WHA.

What a load of crap. These once trusted and now uncovered as untrustworthy, creepy organizations use the same propaganda every single time. I would never believe anything they said, ever, even if the principals were hooked to a lie detector when saying them. They are liars and have proven to humanity that they are also mass murderers. No sale here.

Synchron Inc is Neuralink’s competitor. Synchron second largest shareholder is Blackrock. Neuralink is owned by Elon Musk. Anyone who thinks that brain-computer interface in the hands of technocrats, transhumanists, and the NIH will be used exclusively to help the disabled is simply not paying attention. It is a colossal bait and switch humanitarian hoax.

Absolutely. And, who exactly, is participating in these ‘trials’? I’d love to know how much they are getting paid to potentially become brain dead.