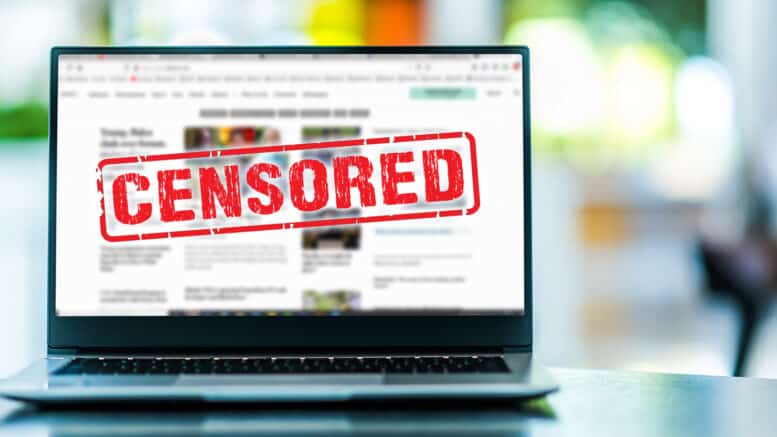 Image courtesy of The Defender

Posted By: Whitney Webb via The Defender November 18, 2020

Please Share This Story!
PDF 📄
Anti-vaxxers are positioned as a threat to national security.  Bully tactics further threaten them with economic destruction such as being placed on “no-fly” lists by airlines, other travel restrictions, loss of employment, no school for kids, no access to commercial institutions, etc. This is the face of Scientific Dictatorship, aka Technocracy. ⁃ TN Editor

News organizations and journalists who raise legitimate concerns about Operation Warp Speed will be de-platformed to make way for the “required” saturation of pro-vaccine messaging across the English-speaking media landscape.

In just the past week, the national-security states of the U.S. and UK have discreetly let it be known that the cyber tools and online tactics previously designed for use in the post-9/11 “war on terror” are now being repurposed for use against information sources promoting “vaccine hesitancy” and information related to COVID-19 that runs counter to their state narratives.

A new cyber offensive was launched on Monday by the U.K.’s signal intelligence agency, Government Communications Headquarters (GCHQ), which seeks to target websites that publish content deemed to be “propaganda” that raises concerns regarding state-sponsored COVID-19 vaccine development and the multinational pharmaceutical corporations involved.

Similar efforts are underway in the U.S., with the U.S. military recently funding a CIA-backed firm — stuffed with former counterterrorism officials who were behind the occupation of Iraq and the rise of the so-called Islamic State — to develop an AI algorithm aimed specifically at new websites promoting “suspected” disinformation related to the COVID-19 crisis and the U.S. military–led COVID-19 vaccination effort known as Operation Warp Speed.

Both countries are preparing to silence independent journalists who raise legitimate concerns over pharmaceutical industry corruption or the extreme secrecy surrounding state-sponsored COVID-19 vaccination efforts, now that Pfizer’s vaccine candidate is slated to be approved by the U.S. Food and Drug Administration (FDA) by month’s end.

Pfizer’s history of being fined billions for illegal marketing and for bribing government officials to help them cover up an illegal drug trial that killed eleven children (among other crimes) has gone unmentioned by most mass media outlets, which instead have celebrated the apparently imminent approval of the company’s COVID vaccine without questioning the company’s history or that the mRNA technology used in the vaccine has sped through normal safety trial protocols and has never been approved for human use. Also unmentioned is that the head of the FDA’s Center for Drug Evaluation and Research, Patrizia Cavazzoni, is the former Pfizer vice president for product safety who covered up the connection of one of its products to birth defects.

Essentially, the power of the state is being wielded like never before to police online speech and to deplatform news websites to protect the interests of powerful corporations like Pfizer and other scandal-ridden pharmaceutical giants as well as the interests of the U.S. and U.K. national-security states, which themselves are intimately involved in the COVID-19 vaccination endeavor.

The U.K. newspaper The Times reported that the U.K.’s GCHQ “has begun an offensive cyber-operation to disrupt anti-vaccine propaganda being spread by hostile states” and “is using a toolkit developed to tackle disinformation and recruitment material peddled by Islamic State” to do so. In addition, the U.K. government has ordered the British military’s 77th Brigade, which specializes in “information warfare,” to launch an online campaign to counter “deceptive narratives” about COVID-19 vaccine candidates.

The newly announced GCHQ “cyber war” will not only take down “anti-vaccine propaganda” but will also seek to “disrupt the operations of the cyber-actors responsible for it, including encrypting their data so they cannot access it and blocking their communications with each other.”  The effort will also involve GCHQ reaching out to other countries in the “Five Eyes” alliance (U.S., Australia, New Zealand and Canada) to alert their partner agencies in those countries to target such “propaganda” sites hosted within their borders.

The Times stated that “the government regards tackling false information about inoculation as a rising priority as the prospect of a reliable vaccine against the coronavirus draws closer,” suggesting that efforts will continue to ramp up as a vaccine candidate gets closer to approval.

It seems that, from the perspective of the U.K. national-security state, those who question corruption in the pharmaceutical industry and its possible impact on the leading experimental COVID-19 vaccine candidates (all of which use experimental vaccine technologies that have never before been approved for human use) should be targeted with tools originally designed to combat terrorist propaganda.

Some folks won’t believe it. But I’m convinced that the covid19 vaccine incorporated with 5G and digital currency plans are a part of the coming mark of the beast system. Folks better wake up. There has been recent talk about denying people food stamps who refuse to take the cv19 vaccine. One thing I know for sure. When governments, bureaucrats or technocrats begin to mandate that people put something anywhere in their bodies in order to be allowed to conduct financial transactions I.e., buy or sell goods or services. No doubt in my mind that the mark of the beast… Read more »

Anne is correct. What sent alarm bells off in my mind is how many times the word ‘vaccines for all’ are mentioned in the UN Agenda 2030 and Sustainable Development program. Moderna is a new company. Founded just a few years ago and has NEVER produced a vaccine until this point in time. I looked into the bio of the founders/investors early in the history of the company and one of the people was a signer of the Sustainable Development agenda. This is truly biblical and I am not a religious person. So many odd coincidences with the Satanic agenda.… Read more »

Anne, the mark is associated with the worship of Satan, this cannot happen until the church has gone to heaven. If that happened right as we speak this mark will not come for at least 3 1/2 years, as the tribulation lasts 7 years. The Tribulation starts when Israel signs a peace treaty with the anti-Christ. “And the third angel followed them, saying with a loud voice, if any man WORSHIP the beast and HIS IMAGE, and receive HIS MARK in his FOREHEAD or in his hand, The same shall drink of the wine of the wrath of God, which… Read more »

i watch my Microsoft news they present daily and can easily pick the pro vax propaganda. theres an article everyday. and a closer inspection of the author etc finds it wasnt a “mum from the suburbs” but a government media consultant etc. they dont even try to hide it. the ggreat reset features well with articles appearing that getting chipped is great for ease of banking.

Another cogent article. I recommend your books and emails regularly. I deeply appreciate your work. Many, many thanks.