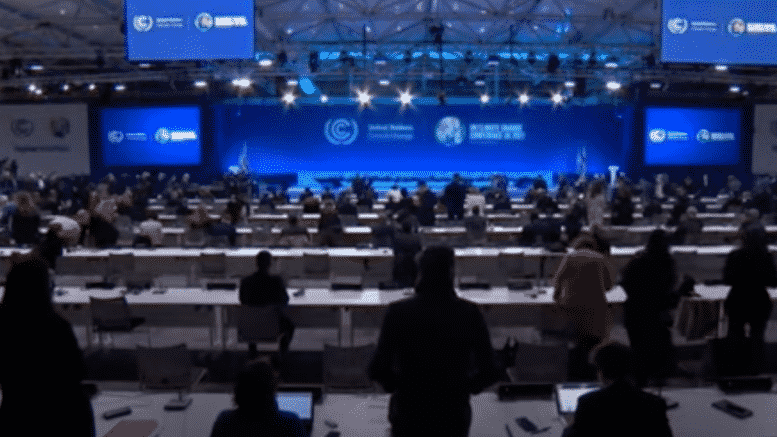 Please Share This Story!
PDF 📄
But, he says don’t worry, that his agenda will help Americans save energy by installing solar panels on their homes to make them more energy efficient. This is patently insane Technocrat babbling about saving the world by destroying the world. In the end, the anti-carbon rhetoric will be seen as anti-human. ⁃ TN Editor

The president spoke to the summit after struggling to stay awake for the opening remarks from world leaders about the importance of addressing the issue of global warming.

Biden said he was planing “a marathon” for the United States economy that would “transform the largest economy in the world into a thriving, innovative, equitable, and just clean energy engine of net zero for a net-zero world.”

The president previously expressed his disappointment that the leaders of Russia and China did not attend the summit to join the world in reducing carbon emissions in their economies.

But during his speech, Biden outlined his goal to make the United States into a “net-zero emissions economy” by 2050, promising “bold action” to lead the world on climate change:

That’s why today I’m releasing the US long-term strategy, which presents a vision of achieving the United States goal of net-zero emissions economy-wide by no later than 2050 and reinforces an absolutely critical nature of taking bold action with — in the decisive decade.

Biden alluded to former President Donald Trump walking away from climate commitments in the past and said his administration was “working overtime” to demonstrate action on the climate crisis.

Biden used his speech to outline his “Build Back Better” agenda as evidence he was serious about climate change, even though it remains stalled in Congress. He argued his proposals would help the climate by offering more taxpayer subsides for electric vehicles and by electrifying school buses. He also promoted the idea of building more electric charging stations, windmills, and solar powered infrastructure that would improve the production and use of green energy.

Blah, blah, blah. Puppet Biden is at it again. I think more favorably of Putin than Biden these days, not that either deserves favorable thought.

President Biden is a moron. Despite what mass media is telling you solar, at the end of 20 years or less if you are installing used panels, is going to cost you more money and cause more pollution and non-renuable resources than buying your energy from a utility. Yeah yeah yeah, you get all those rebates from going solar and it looks like your energy costs are going down but when you figure in all the costs of going solar and non-renewable resources expended, most of what you think is being saved is totally wasted and you actually cause more… Read more »

YOU WILL OWN NOTHING and you WILL be happy. I think the technocrats will find food shortages and freezing to death are VERY unpopular. By the time they crash the currency they will be going door to door to round up the unvaxxed and send the rest to the resettlement camps (which they’ve already built in Australia and New Zealand). Half the voters who went deranged hissy fits about the orange man will GLADLY accept big brother force suffocating and jabbing them and their children and the other half will run out of ammo. Maybe we can hide in the… Read more »

I understand that Canada already uses the internment camps.

[…] supports the “Build Back Better” agenda, which is actually the WEF agenda to change our economic system from free market capitalism to stakeholder capitalism, a euphemism for […]

[…] supports the “Build Back Better” agenda, which is actually the WEF agenda to change our economic system from free market capitalism to stakeholder capitalism, a euphemism for […]