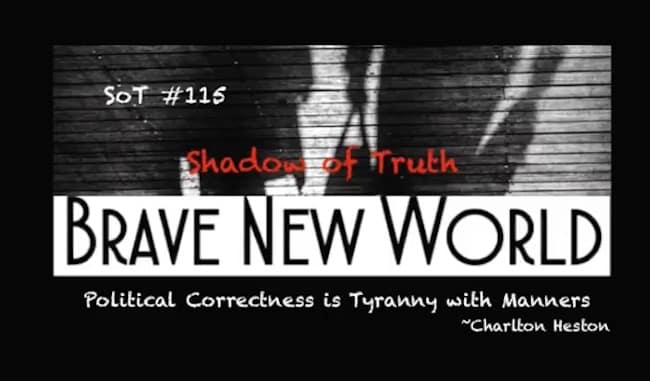 Please Share This Story!
PDF 📄
The influence of historic Technocracy in American education is profound. Basically, they reasoned that education is nothing more than human conditioning used to mold young minds to the needs of the collective. ⁃ TN Editor

“At its worst, political correctness is nothing different from Orwell’s Newspeak – an attempt to change the way people think by forcibly changing the way they speak.” – Urban Dictionary

“Every child in America entering school at the age of five is mentally ill because he comes to school with certain allegiances to our founding fathers, toward our elected officials, toward his parents, toward a belief in a supernatural being, and toward the sovereignty of this nation as a separate entity. It’s up to you as teachers to make all these sick children well by creating the international child of the future.”  –  Chester M. Pierce, Harvard psychiatrist, speaking as an expert in public education at the 1973 International Education Seminar.

The “Dear Hillary” letter, written on Nov. 11, 1992 by Marc Tucker, president of the National Center on Education and the Economy (NCEE), lays out a plan “to remold the entire American system” into “a seamless web that literally extends from cradle to grave and is the same system for everyone,” coordinated by “a system of labor market boards at the local, state and federal levels” where curriculum and “job matching” will be handled by counselors “accessing the integrated computer-based program.”

Tucker’s plan would change the mission of the schools from teaching children academic basics and knowledge to training them to serve the global economy in jobs selected by workforce boards. Nothing in this comprehensive plan has anything to do with teaching schoolchildren how to read, write, or calculate.

Twenty-seven or eight years ago, I was interviewed by a reporter at the Sacramento Bee about my articles challenging the thinking of animal rights. The reporter said to me, “But they are politically correct and you are not.” I agreed, saying that if anyone ever called me politically correct, it would be time to slit my throat.

Why do I bring this up now? Back then I didn’t realize where p.c. was going; now it is full-force tyranny. Am I exaggerating? Few people who do not back socialist-leaning thought are allowed to speak on our campuses of ‘higher learning’, many sporting bumper stickers pro Trump or Christianity or pro life have their cars keyed or spray painted. You don’t hear about that happening when one has a coexist bumper sticker.

Political Correctness has become a tool, one of many in the arsenal of global tyranny. It is a tool that could not have been used 40 or 50 years ago; most people still had rational, thinking brains. Since my interview with the Sacramento Bee, the road to hell – or global government – or the death of Western Culture — has gotten so steep we may not be able to stop it or even slow it down.

Do I exaggerate? You tell me. Besides that loss of free speech on college campuses, we have social justice dictating what can, can’t, and must be done. Many campuses require you to intuit someone’s arbitrary choice of gender so that you may properly address them (it would take a perfect clairvoyant to achieve this). Let’s move on to the important stuff – academic learning, or the lack thereof.

College students used to take a liberal arts degree in their undergraduate work to give them a well-rounded base. Now that and most other true academic learning has been ditched for social justice studies, sustainable studies, gaming studies – anything that is anti Western Culture, anything that makes one unemployable, anything that dumbs down the next generations.

Textbooks are full of misinformation, propaganda and lies. Classic literature is banned for using outdated words. Books are ignored or shunned for promoting morality, literacy, reason, common sense, and civility. And while our institutes of higher learning preach, “question authority”, they don’t actually teach questioning anything but Western Culture and its values. They certainly don’t teach students to question the professors’ authority. No longer do students debate tough issues; no one wants to take the side of the non-politically correct.

How did we get from the Declaration of Independence to the State of Political Correctness? One major contributor was the book, The Ideal Communist City, (a design for No Child Left Behind, Common Core and all the other aliases of behavior modification of children) said here in public education, “The best opportunity for contact among children of preschool age occurs in the nursery, which is the best setting for developing the child’s imitative powers and individual activities. He expresses his inclinations most freely here, and his egocentricity is least harmfully repressed. The positive value of group activity, of course, is fully realized only when it is organized and directed by educators who have benefited from advanced social training.”

Or look at this from the BSTEP program our government (Department of Health, Education, and Welfare) hired Michigan State University to design. “A small elite will carry society’s burdens. The resulting impersonal manipulation of most people’s life styles will be softened by provisions for pleasure seeking and guaranteed physical necessities. Participatory democracy in the American-ideal mold will mainly disappear. The worth and dignity of individuals will be endangered on every hand. Only exceptional individuals will be able to maintain a sense of worth and dignity.”

Let’s not overlook UNESCO, here, “As long as a child breathes the poisoned air of nationalism, education in world-mindedness (one-world order) can produce only precarious results. As we have pointed out, it is frequently the family that infects the child with extreme nationalism. The school should therefore use the means described earlier to combat family attitudes that favor jingoism (nationalism). We shall presently recognize in nationalism the major obstacle to development of world-mindedness.” UNESCO publication #356, “In the Classroom: Toward World Understanding”

It took only about half the lifetime of our country to get us here.

In 1918, Mary Parker Follett wrote, in The New State, group organization – the solution of popular government, “The training for the new democracy must be from the cradle – through nursery, school and play, and on and on through every activity of our life. Citizenship is not to be learned in good government classes or current events courses or lessons in civics. It is to be acquired through those modes of living and acting which shall teach us how to grow the social consciousness. This should be the object of all day school education, of all night school education, of all our supervised recreation, of all our family life, of our club life, of our civic life.

“When we change ideas of the relation of the individual to society, our whole system of education changes. What we want to teach is interdependence, that efficiency waits on discipline, that discipline is obedience to the whole of which I am a part.. . . when we know how to teach social discipline, then we shall know how to ‘teach school.’ The object of education is to fit children into the life of the community.” P.363

So, according to Follett, our lives must focus completely on losing our individual rights and work to subordinate any freedoms we might consider to the cosmic one-ness, the group. The thought of that (if there are thinking minds left) would drive most of us to suicide.

John Dewey, the reformer of the education system, said, “I believe that the school is primarily a social institution. Education being a social process, the school is simply that form of community life in which all those agencies are concentrated that will be most effective in bringing the child to share in the inherited resources of the race, and to use his own powers for social ends. I believe that education, therefore, is a process of living and not a preparation for future living.”

“Humanist Manifesto” (1933) co-author Dewey calls for a synthesizing of all religions and “a socialized and cooperative economic order.” (Deanna Spingola, The New World Order, Programming the Masses)

America cannot last under this. Our country is based on Western Culture, Judeo/Christian Values, the Rule of Law, and other rational, reasoning social institutions. As we eradicate morality, common sense, values, attitudes, and beliefs, we become no different than the animals. Look at Venezuela. Do we want that at a magnitude of the nth degree? If not, now is the time to wake up, stand up, and speak out. We don’t have much time left. Look at the streets of San Francisco, Chicago, Nashville, New York, Los Angeles. Is this what we want to call our civilization?