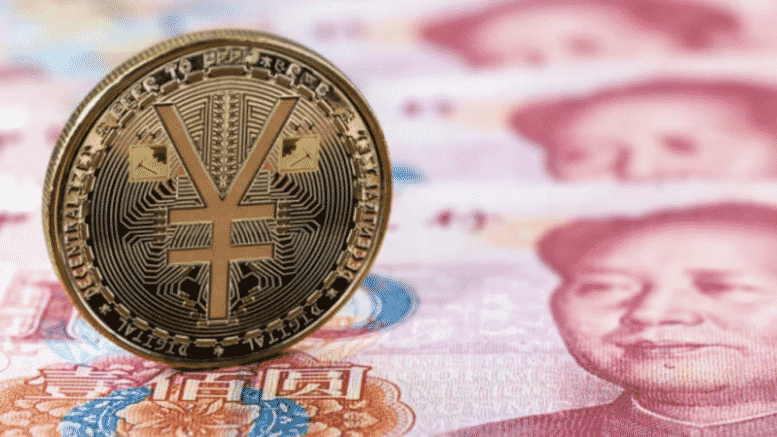 Please Share This Story!
PDF 📄
China’s new digital Yuan supports its blossoming Technocracy by including an expiration date. Technocracy in the 1930s proposed money consisting of an energy script that would automatically expire at the end of the allocation period.

Thus, the door is open to eradicate savings, inheritance and all wealth except for the oligarchs controlling the system. All transactions, along with all other identifiable information about the citizen, will be stored on a central computer at the Central Bank. It would make citizens permanent slaves of the state. ⁃ TN Editor

Last August we reported that China’s Commerce Ministry had released fresh details of a pilot program for the country’s central bank digital currency (CBDC) to be expanded to several metropolitan areas, including Guangdong-Hong Kong-Macao Greater Bay Area, Beijing-Tianjin-Hebei region, and Yangtze River Delta region. This was the inevitable culmination of a process which started back in 2014 when as we reported at the time, “China Readies Digital Currency, IMF Says “Extremely Beneficial“.

Fast forward a few months when China’s preparations to rollout a digital yuan gathered pace, and we reported in October that China was poised to give legal backing to the launch of its own sovereign digital currency, “cementing its trailblazer status in virtual currencies far ahead of other countries, after already recently experimenting with large-scale trials of actual payments by consumers, which was met with mixed results.” Specifically, the South China Morning Post reported that “The People’s Bank of China published a draft law on Friday that would give legal status to the Digital Currency Electronic Payment (DCEP) system, and for the first time the digital yuan has been included and defined as part of the country’s sovereign fiat currency.”

The design framework for the digital yuan had been released one year ago on the heels of Facebook’s ambitious but disastrous Libra token rollout after founding corporate partners split for lack of confidence in the project and on fears US federal regulators would seek to block it just as they did encrypted-messaging company Telegram’s Gram cryptocurrency.

“The draft law would also forbid any party from making or issuing yuan-backed digital tokens to replace the renminbi in the market,” the SCMP said.

This in turn brought us to the so-called “Shenzhen case study”  when in October of 2020, China became the first nation to hold a trial run of its digital currency, when the government in Shenzhen carried out a lottery to give away a total of 10 million yuan (about $1.5 million) worth of the digital currency (nearly 2 million people applied and 50,000 people actually “won”).

The winners were required to download a digital Renminbi app in order to receive a “red packet” worth 200 digital yuan ($30), which they can then spend at over 3,000 designated retailers in Shenzhen’s Luohu district, according to China Daily. After that, they’ll be able to buy goods from local pharmacies, supermarkets and even Walmart.

The idea was to not only test the technology involved, but boost consumer spending in the wake of the COVID-19 pandemic. In short, China is not only subsidizing the centrally-planned economy by manipulating the supply-side of the question- it now can prop up demand by handing out digital currency to anyone (or everyone).

Of course, unlike traditional central bank account-based currencies such as reserves, or decentralized cryptocurrencies like bitcoin, China’s digital currency would be controlled by the country’s central bank and will be instantly made available at a moment’s notice to anyone who can receive it.

And since “China’s adoption of digital central bank tokens is expected to be seamless as most of the nation’s digital payments already pass through companies like TenCent and AliPay and are already very popular in the country”, we concluded that “the successful Shenzhen test means that a broad rollout is just a matter of time.”

Still, one thing was missing: a stamp of approval by the gatekeeper of not only the global payments system, but the protector of the dollar reserve system, SWIFT. But as two months ago, China got that too: as we reported in February, “SWIFT, the global system for financial messaging and cross-border payments, has set up a joint venture with the Chinese central bank’s digital currency research institute and clearing centre, in a sign that China is exploring global use of its planned digital yuan.”

Actually, not just “exploring” but thanks to year of testing and partial rollouts, Beijing was about to become the first country in the world set to launch the digital yuan, and with both the IMF’s and SWIFT’s blessing, we said that it was “just a matter of months if not weeks.”

We were right, because just a few days ago, China’s “cyber yuan” became official when the WSJ finally caught up, writing “China Creates Its Own Digital Currency, a First for Major Economy.”

While regular Zero Hedge readers are quite familiar with the details and chronology of China’s transition to a digital currency, which incidentally is precisely the opposite of a cryptocurrency and has absolutely nothing to do with Bitcoin, a fact which Peter Thiel may want to dwell on a little more next time before making sweep and wrong statements about bitcoin, the WSJ focuses more on the geopolitical reasons of China’s currency evolution – as a reminder, thousand years ago, when money meant coins, China invented paper currency, and now the Chinese government is minting cash digitally, in what the WSJ said is a “re-imagination of money that could shake a pillar of American power” – and specifically how to approach a decoupling from the global reserve currency, the US dollar so not only can Beijing avoid the “nuclear option”, a weaponized US dollar, but allow countries that the US seeks to punish like Iran, a viable alternative (remember, the enemies of China’s enemies – and none is bigger than the US – is China’s friend). Here is the WSJ:

The U.S., as the issuer of dollars that the world’s more than 21,000 banks need to do business, has long demanded insight into major cross-border currency movements. This gives Washington the ability to freeze individuals and institutions out of the global financial system by barring banks from doing transactions with them, a practice criticized as “dollar weaponization.”

The digital yuan could give those the U.S. seeks to penalize a way to exchange money without U.S. knowledge. Exchanges wouldn’t need to use SWIFT, the messaging network that is used in money transfers between commercial banks and that can be monitored by the U.S. government.

To be sure, a credible alternative to the dollar, reduces the need to hoard the currency for US trade partners which in turn would have profound implications on global saving patterns, from there, global capital flows. The consequences for the perpetual US current account deficit would be unprecedented.

In addition to realigining the global balance of monetary power virtually overnight, China’s the digital currency kills another bird with the same binary stone: it allows unprecedented surveillance and supervision over every single transaction.

[The digital yuan is] also trackable, adding another tool to China’s heavy state surveillance. The government deploys hundreds of millions of facial-recognition cameras to monitor its population, sometimes using them to levy fines for activities such as jaywalking. A digital currency would make it possible to both mete out and collect fines as soon as an infraction was detected.

A burst of cash-accumulation in China last year indicates residents’ concern about the central bank’s eye on every transaction. Song Ke, a finance professor at Renmin University in Beijing, told a recent conference that China’s measure of yuan in circulation, or cash, popped up 10% in 2020.

Then there are the myriad boosts to China’s ironclad capital controls:

While China hasn’t published final legislation for the program, the central bank says it may initially impose limits on how much digital yuan individuals can keep on their person, as a way to control how it circulates and provide users a dose of security and privacy.

To be sure, none of this is actually new as we have discussed all these nuances of the digital yuan before. What is now, is this blurb in the WSJ article:

The money itself is programmable. Beijing has tested expiration dates to encourage users to spend it quickly, for times when the economy needs a jump start.

And there you have it: the Keynesian wet dream to boost the velocity of mean finally comes true. For the past decade we have joked that it is only a matter of time before central banks slap on an expiration date on every monetary unit in circulation…