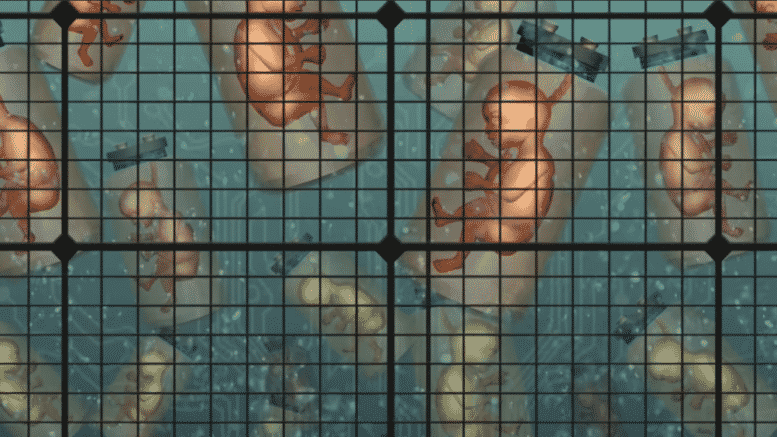 Please Share This Story!
PDF 📄
Technocrats invent because they can, not because there is a pressing need to do so. This is a precursor to incubator reproduction as described in Huxley’s 1932 book, Brave New World and is already linked to gay men being able to ‘have babies’. ⁃ TN Editor

The idea of growing babies outside the body has inspired novels and movies for decades.

And in recent weeks, researchers in The Netherlands have received €2.9m ($4.66m) to develop a prototype for gestating premature babies.

So it’s important to consider some of the ethical issues this technology might bring.

What is an artificial womb?

Growing a baby outside the womb is known as ectogenesis (or exogenesis). And we’re already using a form of it. When premature infants are transferred to humidicribs to continue their development in a neonatal unit, that’s partial ectogenesis.

But an artificial womb could extend the period a fetus could be gestated outside the body. Eventually, we might be able to do away with human wombs altogether.

This may sound far-fetched, but many scientists working in reproductive biotechnology believe that with the necessary scientific and legal support, full ectogenesis is a real possibility for the future.

What would an artificial womb contain?

An artificial womb would need an outer shell or chamber. That’s somewhere to implant the embryo and protect it as it grows. So far, animal experiments have used acrylic tanks, plastics bags and uterine tissues removed from an organism and artificially kept alive.

An artificial womb would also need a synthetic replacement for amniotic fluid, a shock absorber in the womb during natural pregnancy.

Animal experiments have used a complex catheter and pump systems. But there are plans to use a mini version of extracorporeal membrane oxygenation, a technique that allows blood to be oxygenated outside the body.

Once these are in place, artificial gestation could one day become as common as IVF is today, a technique considered revolutionary a few decades ago.

And just as in the case of IVF, there are many who are concerned about what this new realm of reproductive medicine might mean for the future of creating a family.

So what are some of the ethical considerations?

The main discussion about artificial wombs has focused on their potential benefit in increasing the survival rate of extremely premature babies.

Currently, those born earlier than 22 weeks gestation have little-to-no hope of survival. And those born at 23 weeks are likely to suffer a range of disabilities.

Using a sealed “biobag,” which mimics the maternal womb might help extremely premature babies survive and improve their quality of life.

A biobag provides oxygen, a type of substitute amniotic fluid, umbilical cord access and all necessary water and nutrients (and medicine, if required). This could potentially allow the gestational period to be prolonged outside the womb until the baby has developed sufficiently to live independently and with good health prospects.

An artificial womb might provide an optimum environment for the fetus to grow, providing it with the appropriate balance of hormones and nutrients. It would also avoid exposing the growing fetus to external harms such as infectious diseases.

The technology might also make it easier to perform surgery on the fetus if needed.

And it could see the end of long-term hospital stays for premature infants, saving health care dollars in the process. This is particularly noteworthy considering some of the largest private insurance payments​ are currently for neonatal intensive care unit expenses.

Artificial wombs could help with infertility and fertility

This emerging reproductive technology may allow women who are infertile, either due to physiological or social reasons, ​with the chance of having a child. It may also offer opportunities for transgender women and other women born without a uterus, or those who have lost their uterus due to cancer, injury or medical conditions, to have children.

Similarly, it could allow single men and gay male couples to become parents without needing a surrogate.

Will this lead to a broader discussion about gender roles and equality in reproduction? Will it remove potential risks and expectations of pregnancy and childbirth currently only affecting women? Will this eliminate commercial surrogacy?

Equally, artificial wombs could help fertile women who for health or personal reasons choose not to be pregnant. It would allow those whose career choices, medication or lifestyle might otherwise expose a developing fetus to malformation or abnormality.

If you are born with a Vagina understand that you are being Eliminated. Between Transfaggotry, Fake Wombs, AI Sex Dolls & Muslims there will be No Need for Females.

Time to Evolve
Reply to  TheTruthBurns

Absurd, then males too since artificial sperm can be produced as well. IT’s abnormal and barbaric parasitical embryo destroying a woman’s body giving life time of complication inside out to feed on her for nearly a yr then birthing atrocity. We are in a time of evolution and women needs to be equal, that will happen only when the pregnancy has been eliminated.

Well actually artificial wombs are safer option then artificial sperm. First off all tests were made on mices well some succed to give birth to mices born that way but some of them had abnormal “traits” the most impact had the fact that mice lived only 5 months while they usually live for years also normal pregnancy procedure wont give 100% chance that children born that way will be healthy but its definitely still more safe than artificial sperm besides we dont know how this would impact women so literally every woman which decides to do that even with female… Read more »

They always start by telling us that its awesome for good! But this coincides with a report I read today, “Existence of woman is un-Islamic’. You see it? https://www.theisraelwire.com/?p=185391 This is why Sodom was destroyed. You say men can’t have babies? Oh, you say Islam hates homosexuals? Think again! Satan hated Eve from the beginning because she was the mother of all living, he also knows what God hates, and so to tempt man for destruction. Eve’s name means ‘life’ or ‘life giver’. Genesis 3:20

What are you smoking? You have no clue. Islamic revelation gave woman many rights prior to any human rights in any where in the world. Too busy digesting the media content and not enough time processing information on your own.

Oh yes, many rights. For instance, a wife now has the right to be beaten by her husband as long as there is no bruising on the face or head and no blood drawn.

God gave women rights long before islam was invented in the 7th century. Women in islam are “domestic animals” according to your pagan moon God. You can own up to four and are allowed to beat rape and even murder them after all the husband owns so can do as he wills with his non human property.

Artificial Wombs: The Golden Mean For Abortion Or A Way To Mass Produce Catgirls? | The Political Hat

Are motherless babies from artificial wombs the future we’re heading for? – Conservative Beaver

Are motherless babies from artificial wombs the future we’re heading for? – OLD NEWS

[…] ‘The Pod Generation’ is fiction, artificial wombs are in fact a hot topic in predictive science […]

Are motherless babies from artificial wombs the future we’re heading for? - News Info And Info

Are motherless babies from artificial wombs the future we’re heading for?

Are motherless babies from artificial wombs the future we’re heading for? - international-journal

[…] ‘The Pod Generation’ is fiction, artificial wombs are in fact a hot topic in predictive science news. While originally this ‘mad […]

This seems to have jumped the gun. I’m sorry to dissapoint men who hate women but want womb access but you can’t have a baby without an egg. Regardless of where the womb is. You can’t use two sperm either. The mother contributes two genetic pieces X chromosome and mitochondrial DNA while the sperm only gives one chromosome. It’s possible we could take a monkeys egg, give it two sperms worth of chromosomes and spend a few more decades working out how to transfer the mitochondrial DNA but that will come waaay after the womb. It’s why lineage has always… Read more »

Can take a while but actually it can be possible look for ”
Fertilization without an egg: New technique produces healthy baby mice”