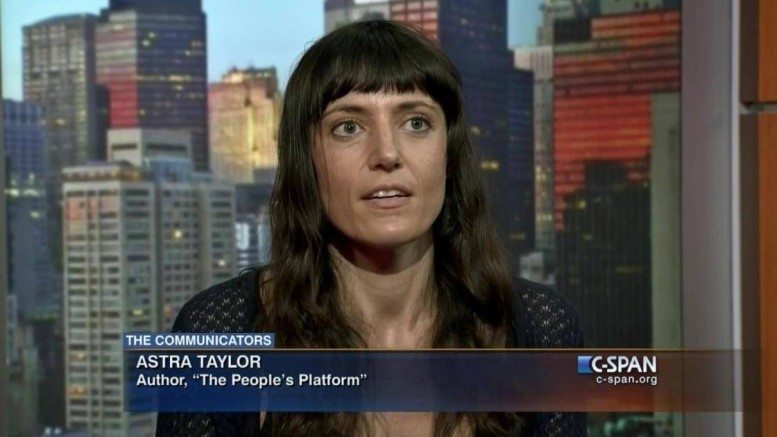 TN Note: People are getting agitated all over the world, and from all political spectrums. It is not technology per se that is the issue, but rather its misuse and the abuse of the technology users.

Astra Taylor’s iPhone has a cracked screen. She has bandaged it with clear packing tape and plans to use the phone until it disintegrates. She objects to the planned obsolescence of today’s gadgetry, and to the way the big tech companies pressure customers to upgrade.

Taylor, 36, is a documentary filmmaker, musician and political activist. She’s also an emerging star in the world of technology criticism. She’s not paranoid, but she keeps duct tape over the camera lens on her laptop computer — because, as everyone knows, these gadgets can be taken over by nefarious agents of all kinds.

Taylor is a 21st-century digital dissenter. She’s one of the many technophiles unhappy about the way the tech revolution has played out. Political progressives once embraced the utopian promise of the Internet as a democratizing force, but they’ve been dismayed by the rise of the “surveillance state,” and the near-monopolization of digital platforms by huge corporations.

Last month, Taylor and more than 1,000 activists, scholars and techies gathered at the New School in New York City for a conference to talk about reinventing the Internet. They dream of a co-op model: people dealing directly with one another without having to go through a data-sucking corporate hub.

We need a movement, she said, “that says no to the existing order.”
The dissenters have no easy task. We’re in a new Machine Age. Machine intelligence and digital social networks are now embedded in the basic infrastructure of the developed world.

Much of this is objectively good and pleasurable and empowering. We tend to like our devices, our social media, our computer games. We like our connectivity. We like being able to know nearly anything and everything, or shop impulsively, by typing a few words into a search engine.

But there’s this shadow narrative being written at the same time. It’s a passionate, if still remarkably disorganized, resistance to the digital establishment.

Techno-skeptics, or whatever you want to call them — “humanists” may be the best term — sense that human needs are getting lost in the tech frenzy, that the priorities have been turned upside down. They sense that there’s too much focus on making sure that new innovations will be good for themachines.

“I’m on Team Human!” author Douglas Rushkoff will say at the conclusion of a talk.

You could fill a college syllabus with books espousing some kind of technological resistance. Start the class with “You Are Not a Gadget” (Jaron Lanier), move on to “The Internet Is Not the Answer” (Andrew Keen), and then, to scare the students silly, “Our Final Invention: Artificial Intelligence and the End of the Human Era” (James Barrat).
Somewhere in the mix should be Astra Taylor’s “The People’s Platform: Taking Back Power and Culture in the Digital Age,” a clear-eyed reappraisal of the Internet and new media.

Of the myriad critiques of the computer culture, one of the most common is that companies are getting rich off our personal data. Our thoughts, friendships and basic urges are processed by computer algorithms and sold to advertisers. The machines may soon know more about us than we know about ourselves.

Praise the LORD for raising up courageous people who speak out against this pervasive and increasing tyranny .
Sadly scripture tells us most will fully embrace it and receive the mark making excuses that ” who can stand against the beast ?”