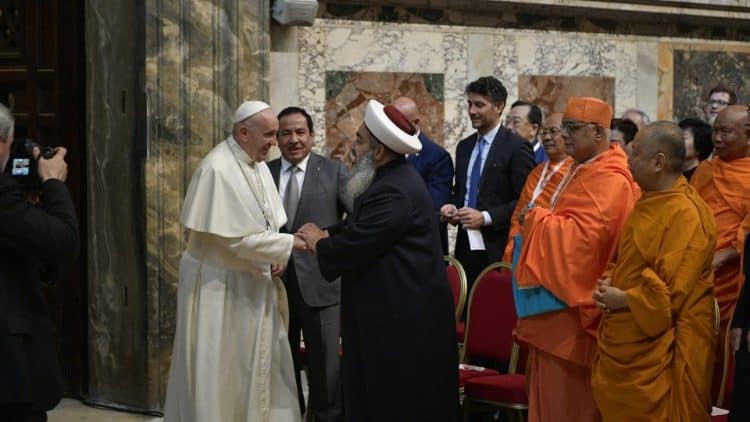 Please Share This Story!
PDF 📄
Pope Francis promotes “the sacredness of our earth” to woo other religions into uniting with the Catholic church in order to fulfill his dream of a united global religion. ⁃ TN Editor

Fast forward to 2019 and the Pope was in the Vatican on Friday where he greeted participants taking part in a two day international conference entitled, “Religions and the Sustainable Development Goals (SDGs): Listening to the cry of the earth and of the poor”.

Listening to all voices

Pope Francis got straight to the point by telling those gathered that, “when we speak of sustainability, we cannot overlook how important it is to include and to listen to all voices, especially those usually excluded from this type of discussion, such as the voices of the poor, migrants, indigenous people and the young.”

The 2030 Agenda and the Sustainable Development Goals, the Pope said, “were a great step forward for global dialogue, marking a vitally “new and universal solidarity”. But he noted, “for too long, the conventional idea of development has been almost entirely limited to economic growth.”

The Pontiff emphasized that, “this has led the modern economic system down a dangerous path where progress is assessed only in terms of material growth, on account of which we are almost obliged to irrationally exploit the environment and our fellow human beings.”

Economic and political objectives, Pope Francis stressed, “must be sustained by ethical objectives, which presuppose a change of attitude: what the Bible would call a change of heart. Already Saint John Paul II spoke about the need to “encourage and support an ‘ecological conversion’”, he said.

The Pope underlined that what was needed was a commitment to “promoting and implementing the development goals that are supported by our deepest religious and ethical values.” He also expressed the hope that concrete solutions and responses would emerge from the conference.

Noting the importance of the religious dimension to this gathering, Pope Francis said that “those of us who are religious need to open up the treasures of our best traditions in order to engage in a true and respectful dialogue on how to build the future of our planet.”

The Pontiff also underlined, that “if we want to provide a solid foundation for the work of the 2030 Agenda, “we must reject the temptation to look for a merely technocratic response to the challenges, and be prepared to address the root causes and the long-term consequences.”

During his address, the Pope made particular mention of Indigenous Peoples saying that, “in a strongly secularized world, such peoples remind us all of the sacredness of our earth. Their voice and their concerns, he added, should be at the centre of the implementation of the 2030 Agenda and at the heart of the search for new paths for a sustainable future. I will also be discussing this with my brother bishops at the Synod for the Pan-Amazon Region, at the end of October this year.”

Injustice that brings tears to our world is not invincible

Concluding his address and quoting his encyclical Laudato Si, he told those present that, “three and a half years since the adoption of the sustainable development goals, we must be even more acutely aware of the importance of accelerating and adapting our actions in responding adequately to both the cry of the earth and the cry of the poor.”

He added, “the challenges are complex and have multiple causes; the response, therefore, must necessarily be complex and well-structured, respectful of the diverse cultural riches of peoples.”

Expressing his understanding for the task that can at times seem all too difficult, the Pope offered words of encouragement. “Human beings, while capable of the worst, are also capable of rising above themselves, choosing again what is good, and making a new start”.

“I encourage you to continue the fight for that change which present circumstances demand, because the injustice that brings tears to our world and to its poor is not invincible.”

The Conference is being jointly organized by the Vatican Dicastery for Promoting Integral Human Development and the Pontifical Council for Interreligious Dialogue and runs until March 9th.

It has been apparent from the beginning that this current Pachamama Popey was more obeyant to Pachamama than he was to the Virgin Mary. There is an old question: Is the Pope Catholic? Not in the current case, no.