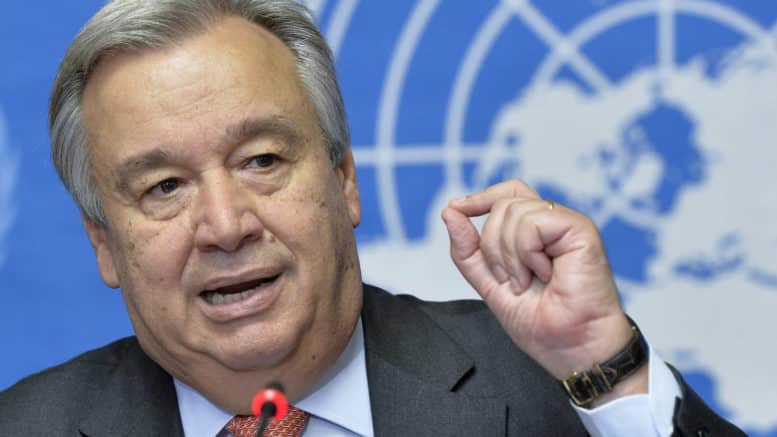 Please Share This Story!
PDF 📄
Proving the point that the assault on Free Speech is being driven by Technocracy, the United Nations has openly joined the fray in the name of Sustainable Development, Agenda 2030, New Urban Agenda, etc. ⁃ TN Editor

In January, United Nations Secretary-General Antonio Guterres, tasked his Special Adviser for the Prevention of Genocide, Adama Dieng, to “present a global plan of action against hate speech and hate crimes on a fast-track basis”. Speaking at a press conference about the UN’s challenges for 2019, Guterres maintained, “The biggest challenge that governments and institutions face today is to show that we care — and to mobilize solutions that respond to people’s fears and anxieties with answers…”

One of those answers, Guterres appeared to suggest, is shutting down free speech.

“We need to enlist every segment of society in the battle for values that our world faces today – and, in particular, to tackle the rise of hate speech, xenophobia and intolerance. We hear troubling, hateful echoes of eras long past” Guterres said, “Poisonous views are penetrating political debates and polluting the mainstream. Let’s never forget the lessons of the 1930s. Hate speech and hate crimes are direct threats to human rights…”

Guterres added, “Words are not enough. We need to be effective in both asserting our universal values and in addressing the root causes of fear, mistrust, anxiety and anger. That is the key to bring people along in defence of those values that are under such grave threat today”.

In other words, forget everything about the free exchange of ideas: the UN feels that its ‘values’ are being threatened and those who criticize those values must therefore be shut down. Not only that, but — disingenuously — the UN is comparing dissent from its agendas with the rise of fascism and Nazism in the 1930s.

Now the action plan that Guterres spoke of in January is ready. On June 18, Guterres presented the United Nations Strategy and Plan of Action on Hate Speech:

“Hate speech is…an attack on tolerance, inclusion, diversity and the very essence of our human rights norms and principles,” Guterres said. He also wrote in an article on the subject, “To those who insist on using fear to divide communities, we must say: diversity is a richness, never a threat…We must never forget, after all, that each of us is an “other” to someone, somewhere”.

According to the action plan, “Hate is moving into the mainstream – in liberal democracies and authoritarian systems alike. And with each broken norm, the pillars of our common humanity are weakened”. The UN sees for itself a crucial role: “As a matter of principle, the United Nations must confront hate speech at every turn. Silence can signal indifference to bigotry and intolerance…”.

Naturally, the UN assures everyone that, “Addressing hate speech does not mean limiting or prohibiting freedom of speech. It means keeping hate speech from escalating into something more dangerous, particularly incitement to discrimination, hostility and violence, which is prohibited under international law”.

Except the UN most definitely seeks to limit freedom of speech, especially the kind that challenges the UN’s agendas. This was evident with regard to the Global Compact for Safe, Orderly and Regular Migration in which it was explicitly statedthat public funding to “media outlets that systematically promote intolerance, xenophobia, racism and other forms of discrimination towards migrants” should be stopped.

In contrast to the UN Global Migration compact, the UN’s action plan against hate speech does contain a definition of what the UN considers to be “hate” and it happens to be the broadest and vaguest of definitions possible:

“Any kind of communication in speech, writing or behaviour, that attacks or uses pejorative or discriminatory language with reference to a person or a group on the basis of who they are, in other words, based on their religion, ethnicity, nationality, race, colour, descent, gender or other identity factor”. With a definition as broad as this, all speech could be labelled “hate”.

The action plan, “aims to give to the United Nations the room and the resources to address hate speech, which poses a threat to United Nations principles, values and programmes. Measures taken will be in line with international human rights norms and standards, in particular the right to freedom of opinion and expression. The objectives are twofold: Enhance UN efforts to address root causes and drivers of hate speech [and] enable effective UN responses to the impact of hate speech on societies”.

The UN makes it clear in the plan that it “will implement actions at global and country level, as well as enhance internal cooperation among relevant UN entities” to fight hate speech. It considers that “Tackling hate speech is the responsibility of all – governments, societies, the private sector” and it envisages “a new generation of digital citizens, empowered to recognize, reject and stand up to hate speech”. What a brave new world.

Well, then any search hits from the IPCC should be banned as they spread fear.

The nature of this beast is attack on communication itself – as the lie and the father of it. Read everything backwards and it reveals itself in every turn of phrase. The false sense of self AND the reactive attempt to adjust it BOTH operate the fear and the ‘answer’ as a way of ruling out love’s awareness now. So owning our fear rather than calling for unconsciousness is the willingness to look at it and to reach beyond who we thought to be for our true need. Beware the inducement or baiting to polarised reaction and its false identity… Read more »

PS – thanks for the comment box. The denial of our voice calls for the willingness to let a true with-ness reveal truly shared worth-ship replace the false.

It said my comment had to be approved by a moderator. So how do you know everyone has their opinion shared?

You don’t know, however, almost all comments are approved. Spam, threats, obvious trolls, profanity and suggestions for illegal behavior are not allowed.

Which in the long run suggest that the UN’s Dialog with mankind has censored itself from serious communications.

Why would anyone listen to the noise of someone who has gagged themselves with Pseudo Science and Political Correctness. It’s like Driving on a Freeway with you hands tied behind your back, your feet stuffed under you behind and your eyes blindfolded.

Eyes that do not see, and Ears that do no Hear are driving the UN’s Globalist Agenda.

This is Spiritual Warfare aimed and omitting Truth, Life, and Western Cultures Rule of Law.

Discussion? This is no discussion my friend. We don’t plan to discuss anything with the UN. We are telling it outright you fuque with us in American and you’ll find that we really do have a gun behind every blade of grass.

So all the hysterics who actually believe that the UN can do anything to us, had better get their heads out, because we need everyone thinking and being alert for the possibility of the UN’s presents, so we can go and disarm them at gun point.

The problem is THEY are the ones causing all the hate, discontent, and fear. They just can’t leave people alone to work things out on their own. They have to inject totalitarianism and Communism into everything they do. They simply don’t know what they’re talking about. It’s reverse logic.

That is a lie from the pit of hell itself, run down people who believe in Christ as God and let Islam cut down and lie to advance their agendas of world dominance. Wake up people!!

“Truth: the most deadly weapon ever discovered by humanity. Capable of destroying entire perceptual sets, cultures, and realities. Outlawed by all governments everywhere. Possession is normally punishable by death.” ~ John Gilmore

“It means keeping hate speech from escalating into something more dangerous, particularly incitement to discrimination, hostility and violence, which is PROHIBITED UNDER INTERNATIONAL LAW.” Again, LIES as TRUTHS. AND! Threat, threat, threat–threat, threat, threat. Yes. As this UN article reads anything spoken/written can be called hate speech. It states all too clearly–STOP FREEDOM of SPEECH at all costs. How? Define all dissenting opinions as ‘hate speech’, the UN’s new ‘US National Security’ catchall phase. Why? To curtail all dissent and retain control of humanity’s mind. Cost of failure–the planet. Worldwide, humans are in communication today as never before. Consequently, in… Read more »

Since the UN has never stopped a genocide, only added to then, never stopped a war and prevented anyone of starving the best course of action would kick these globalist to the curb and house some of our homeless in their headquarters. The money we would save and the independence we gain we could work up the fortitude to kick the Federal Reserve out too before the dollar is more than worthless.

When I tried to access the full article….it was not available….ha